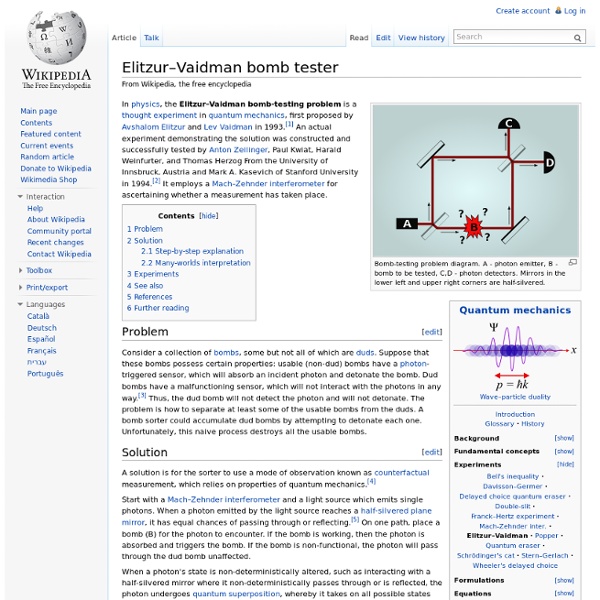 Bomb-testing problem diagram. A - photon emitter, B - bomb to be tested, C,D - photon detectors. Mirrors in the lower left and upper right corners are half-silvered. In physics, the Elitzur–Vaidman bomb-testing problem is a thought experiment in quantum mechanics, first proposed by Avshalom Elitzur and Lev Vaidman in 1993.[1] An actual experiment demonstrating the solution was constructed and successfully tested by Anton Zeilinger, Paul Kwiat, Harald Weinfurter, and Thomas Herzog from the University of Innsbruck, Austria and Mark A. Kasevich of Stanford University in 1994.[2] It employs a Mach–Zehnder interferometer for ascertaining whether a measurement has taken place. Problem[edit] Consider a collection of bombs, of which some are duds. Solution[edit] Start with a Mach–Zehnder interferometer and a light source which emits single photons. Step-by-step explanation[edit] If the bomb is a dud: The bomb will pass the wave, so the situation is as described above, without a bomb. See also[edit] Related:  Founding experiments

Alain Aspect Alain Aspect (French: [aspɛ] ( ); born 15 June 1947) is a French physicist noted for his experimental work on quantum entanglement. Biography[edit] Aspect is a graduate of the École Normale Supérieure de Cachan (ENS Cachan). In the early 1980s, while working on his PhD thesis[1] from the lesser academic rank of lecturer, he performed the elusive "Bell test experiments" that showed that Albert Einstein, Boris Podolsky and Nathan Rosen's reductio ad absurdum of quantum mechanics, namely that it implied 'ghostly action at a distance', did in fact appear to be realised when two particles were separated by an arbitrarily large distance (see EPR paradox). If quantum theory is correct, the determination of an axis direction for the polarization measurement of one photon, forcing the wave function to 'collapse' onto that axis, will influence the measurement of its twin. Aspect was deputy director of the French "grande école" SupOptique until 1994. Alain Aspect in Budapest, 2013 See also[edit]

Schrödinger's cat Schrödinger's cat: a cat, a flask of poison, and a radioactive source are placed in a sealed box. If an internal monitor detects radioactivity (i.e. a single atom decaying), the flask is shattered, releasing the poison that kills the cat. The Copenhagen interpretation of quantum mechanics implies that after a while, the cat is simultaneously alive and dead. Yet, when one looks in the box, one sees the cat either alive or dead, not both alive and dead. This poses the question of when exactly quantum superposition ends and reality collapses into one possibility or the other. Schrödinger's cat is a thought experiment, sometimes described as a paradox, devised by Austrian physicist Erwin Schrödinger in 1935.[1] It illustrates what he saw as the problem of the Copenhagen interpretation of quantum mechanics applied to everyday objects. Origin and motivation[edit] Real-size cat figure in the garden of Huttenstrasse 9, Zurich, where Erwin Schrödinger lived 1921 – 1926. Schrödinger wrote:[1][10]