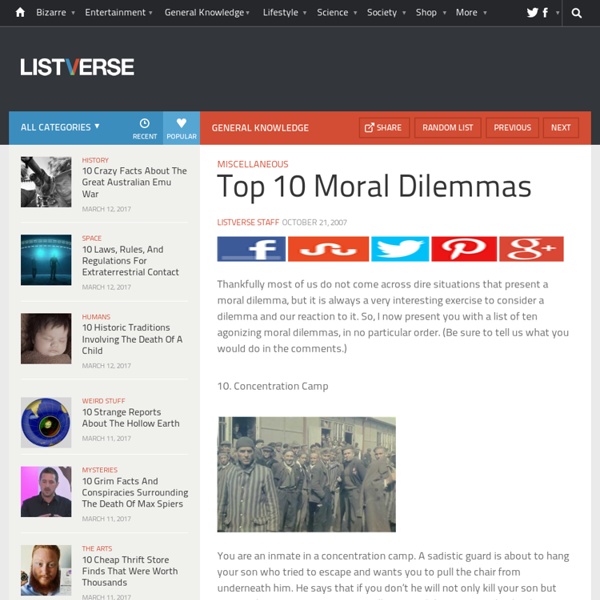 Miscellaneous Thankfully most of us do not come across dire situations that present a moral dilemma, but it is always a very interesting exercise to consider a dilemma and our reaction to it. So, I now present you with a list of ten agonizing moral dilemmas, in no particular order. (Be sure to tell us what you would do in the comments.) 10. Concentration Camp You are an inmate in a concentration camp. 9. You are an emergency worker that has just been called to the scene of an accident. She sees you and although barely conscious, she manages to mouth the words “I’m sorry”… You don’t understand, but her look answers you question. You reel back in shock, devastated by what her eyes have just told you. You look at the seat next to her and see her lover. If you tend to your wife however, the man will bleed to death despite the fact it could have been avoided. Who would you choose to work on? 8. You are the network administrator for a rather large company. What do you do? 7. You sit down to think.

Moral Dilemmas 1. Examples In Book I of Plato's Republic, Cephalus defines ‘justice’ as speaking the truth and paying one's debts. Socrates quickly refutes this account by suggesting that it would be wrong to repay certain debts—for example, to return a borrowed weapon to a friend who is not in his right mind. Ethical Dilemmas Be sure to discuss your reasons and possible alternative solutions to the one that you propose. Is what you would 'actually' do different from what you 'should' do? If so, why? 10 More Moral Dilemmas Humans Morality is fun to debate. At the end of last December, I posted a list of another 10 dilemmas. By the comments submitted, I realize many did not feel that they had sufficient debatable merit.

Lessons Worth Sharing While high speed loop-to-loop coasters and haunted houses are commercial hits of the 20th and 21st centuries, people have been scaring themselves and each other since the birth of the species. This has occurred through all kinds of methods such as storytelling, jumping off cliffs, and popping out to startle each other from the recesses of some dark cave. And we’ve done this for reasons other than fun: inciting fear is very effective at building group solidarity, teaching the next generation about what to fear and how to survive, and as a means of controlling behavior. For a more comprehensive history of how we’ve scared ourselves, you can check out SCREAM: Chilling Adventures in the Science of Fear. One of the most interesting things about studying fear is looking at the social constructions of fear and how culture and socialization influence what we’re afraid of. Through fear conditioning, which is connecting a neutral stimulus with a negative consequence, we can create a fear.

The Generalized Structure of Moral Dilemmas, The Trolley Problem Among men there are but few who behave according to principles -- which is extremely good, as it can so easily happen that one errs in these principles, and then the resulting disadvantage extends all the further, the more universal the principle and the more resolute the person who has set it before himself.Immanuel Kant, Observations of the Feeling of the Beautiful and Sublime[translated by John T. Goldthwait, University of California Press, 1960, p.74] The most common question I'm asked by such non-legal characters as cross my path, or get talking to me over a glass in Pommery's Wine Bar, is how you can defend a customer when you know he's guilty. Well, the answer is, of course, that you don't.

Ethical Dilemma Examples Ethical dilemmas, also known as a moral dilemmas, are situations in which there is a choice to be made between two options, neither of which resolves the situation in an ethically acceptable fashion. In such cases, societal and personal ethical guidelines can provide no satisfactory outcome for the chooser. Ethical dilemmas assume that the chooser will abide by societal norms, such as codes of law or religious teachings, in order to make the choice ethically impossible. Ethical Dilemma Situations Forrest Gump: Lessons On Movies.com: ESL Lessons FORREST GUMP POSTER 1. SIX WORDS: Look at the poster and write down six words (more if you like) that you think of as you look at it. Share the words with your partner(s). We don’t really get on. (Phrasal verbs for describing relationships) by Kate Woodford​ Two people who have a good relationship are often said to get on (well): I get on really well with both of my brothers. Meanwhile, people who stop being friends after an argument are frequently said to fall out: The brothers fell out over money.

Polynomic Theory of Value, Pleasure, Virtues of Franklin and Wooden after Immanuel Kant, Friedrich von Schiller, & Leonard Nelson Miranda There's nothing ill can dwell in such a temple. If the ill spirit have so fair a house, Good things will strive to dwell with't. The Tempest, William Shakespeare, Act 1, Scene 2:459-462 But welfare has no principle, neither for him who receives it, nor for him who distributes it (one places it here, another there); because it depends on the material of the will, which is empirical, and therefore is incapable of the generality of a rule. Classic Lateral Thinking Exercises Test yourself with these thinking excercises. The solutions are at the bottom of the page. Don't be lazy. Try hard to figure these out before you look! It'll be a lot more satisfying. There is a man who lives on the top floor of a very tall building.

no loving father would dignify that demand, paternal instinct takes over like a lion watching over his cub.The guard is going to execute regardless. i,as a father in that dilemma doesn't need to think twice, all for the sake of such an immoral request only to empower such a corrupt, immoral so called, guard. by mrsfrancis Mar 7