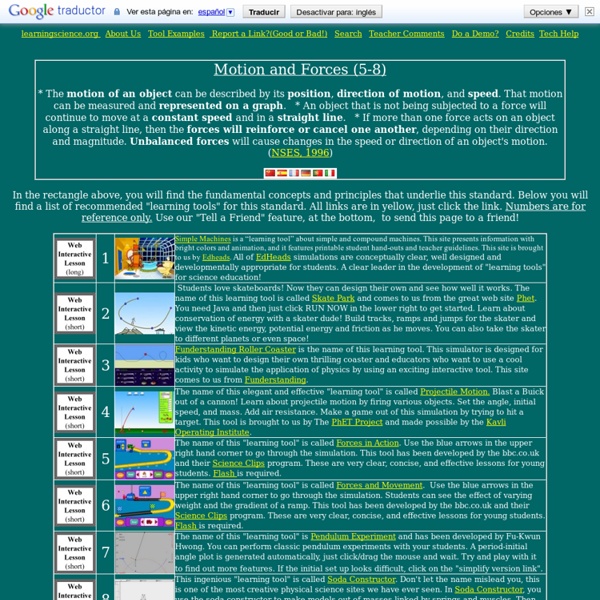 Motion: Introduction Motion is one of the key topics in physics. Everything in the universe moves. It might only be a small amount of movement and very very slow, but movement does happen. Don't forget that even if you appear to be standing still, the Earth is moving around the Sun, and the Sun is moving around our galaxy. The movement never stops. Motion is one part of what physicists call mechanics. Acceleration is a twist on the idea of velocity. There are two main ideas when you study mechanics. There are also more complex movements when an object's direction is changing. In order to really understand motion, you have to think about forces, acceleration, energy, work, and mass. Or search the sites for a specific topic.

Galileo Drops the Ball - Virtual Experiment In around 1590 Galileo Galilei (1564-1642) climbed up the Leaning Tower of Pisa and dropped some balls to the ground. Two balls of different masses, but of similar shape and density that were released together hit the ground at the same time. Until then it was commonly believed that heavy things fall faster than light things. Many people still believe this, and casual observation of everyday phenomena often does tend to confirm this view. If you drop a brick and a feather at the same time the brick will probably hit the ground first. Galileo’s discovery is important in understanding how parachutes work. Click on the image to the left to try Galileo’s experiment for yourself. Find out more about Galileo Galilei.

A bowling ball and feather fall in world's biggest vacuum chamber You probably already know how this one ends, but that doesn't make watching it play out any less spectacular. [optional caption text here] Image: [name here]/Shutterstock The combination of bowling ball and feather is the perfect way to demonstrate air resistance, also known as drag. British physicist Brian Cox wanted to see this primary-school problem play out in a vacuum, where there is zero air resistance to mess with the results. When not in use, the chamber contains around 30 tonnes of air, but when it’s turned on, all but around 2 grams of air are sucked out to create an artificial vacuum.

Average vs. Instantaneous Speed During a typical trip to school, your car will undergo a series of changes in its speed. If you were to inspect the speedometer readings at regular intervals, you would notice that it changes often. The speedometer of a car reveals information about the instantaneous speed of your car. The instantaneous speed of an object is not to be confused with the average speed. On the average, your car was moving with a speed of 25 miles per hour. For more information on physical descriptions of motion, visit The Physics Classroom Tutorial. Instantaneous vs.

Acceleration - Physics for Kids! Acceleration is a way to measure how fast something is speeding up. Suppose you are riding your bike. You start out going very slowly, hardly pedaling at all. Now you begin to pedal as hard as you can, to speed up - you are accelerating. If you stop pedaling now, friction will work on your bike tires (and you'll have friction from the air, too), and you'll soon start to go slower. One important cause of acceleration is gravity. The acceleration of Earth's gravity will speed you up at about 9.8 meters per second per second (9.8 m/s2, or 9.8 meters per second squared). Standing on the cliff before you jump, you're going zero meters/second. You can use acceleration to find out the mass of an object, because force = mass x acceleration. Learn by doing - Using bikes to work with the physics of motion To find out more about acceleration, check out these books from Amazon.com or from your library: Or check out this link to the Encyclopedia Britannica's article on accleration. or

Newton’s 3 Laws, with a bicycle - Joshua Manley There was this fellow in England named Sir Isaac Newton. A little bit stuffy, bad hair, but quite an intelligent guy. He worked on developing both calculus and physics at the same time. In his work, he came up with the three basic ideas that we still use to describe the physics of motion (up to a point). The ideas have been tested and verified so many times over the years that scientists now call them Newton's Three Laws of Motion. It is helpful when describing forces acting on an object to label their direction. Draw a vector diagram of a bicycle being pedaled and label all of the forces which act on it. Bicycle with thick tires, like mountain bikes, tend to go slower than bicycles with thin tires, like road bikes, when you apply the same amount of force, even if the bicycles are the same weight. According the the conservation of energy theory, energy cannot be created or destroyed.

Matter: Chemical vs. Physical Changes It is important to understand the difference between chemical and physical changes. Some changes are obvious, but there are some basic ideas you should know. Physical changes are usually about states and physical states of states. Chemical changes happen on a molecular level when you have two or more molecules that interact. When you melt an ice cube (H2O), you have a physical change because you add energy. Chemical changes happen on a much smaller scale. Melting a sugar cube is a physical change because the substance is still sugar. Iron (Fe) rusts when it is exposed to oxygen gas in the air. Some chemical changes are extremely small and happen over a series of steps. The sugars glucose, galactose, and fructose all have six carbon atoms, twelve hydrogen atoms, and six oxygen atoms (C6H12O6). Each of the sugars goes through different chemical reactions because of the differences in their molecular structure. Or search the sites for a specific topic.