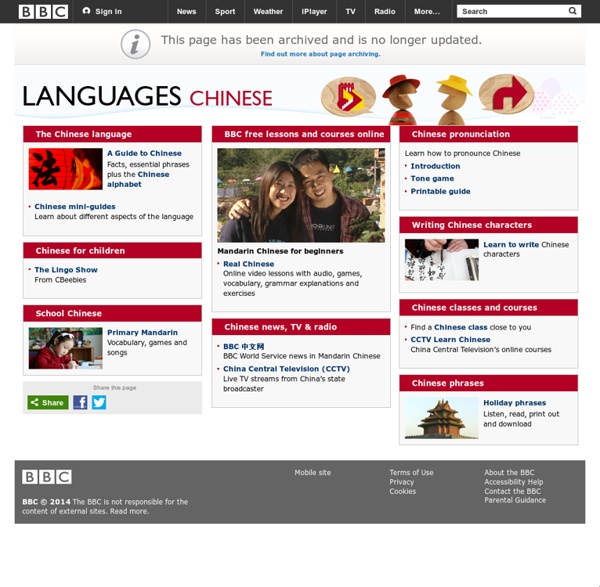 @import '/staticarchive/fa81fb450d419556b29722ee8270c43da933db19.css'; @import '/staticarchive/7ce099eb1cacc32af59884022002b9f87b5f62c5.css'; Cookies on the BBC website We use cookies to ensure that we give you the best experience on our website. We also use cookies to ensure we show you advertising that is relevant to you. If you continue without changing your settings, we'll assume that you are happy to receive all cookies on the BBC website. However, if you would like to, you can change your cookie settings at any time. British Broadcasting Corporation Home Accessibility links This page has been archived and is no longer updated. The Chinese language A Guide to Chinese Facts, essential phrases plus the Chinese alphabet Chinese mini-guides Learn about different aspects of the language Chinese for children The Lingo Show From CBeebies School Chinese Primary Mandarin Vocabulary, games and songs Share this page Share this page 1.6K so far BBC free lessons and courses online Mandarin Chinese for beginners

Glossary - Chinese Grammar Wiki We strive to avoid unnecessarily technical terms on the Chinese Grammar Wiki, but occasionally it's sort of necessary, and sometimes even useful (yes, really!). So to help you out, we've placed all of the grammatical terms related to Mandarin Chinese in one place. Click through each link for a more complete description of each term. Many pages also have lists of grammar points related to the term.

Learn 35+ Languages for Free in iTunes I was just browsing iTunes for poignant Morrissey covers when I discovered nearly a thousand free language courses on iTunes. 926 courses to be exact. Holy Moleskine, Batman! The extensive library of courses span over 35 languages, from Arabic to Yiddish. Learn Chinese Online Chinese Words Learn Chinese words from many different topics such as animals, furniture, and travel. Chinese Dictionary Use our Chinese dictionary for any English - Chinese or Chinese - English translations. Chinese Verbs San Zi Jing narrated in Chinese with English Translation - Audio ), a noted scholar of the Song dynasty. It was used as we use Grimm or perhaps the Little Golden Books; as a basic primer for pre-literate children. Because we now have so many sources of literature and entertainment, we no longer have the Horatio Alger stories, the McGuffy readers, or other common forms of socializing our children. The closest we come to what the San Zi Jing provided is Disney. The San Zi Jing provided a chain of culture and knowledge that linked centuries of children.

The Henry M. Jackson School of International Studies - Professional Development for Educators Make a Difference. Make a Gift. Jackson School Outreach USC professor creates an entire alien language for 'Avatar' James Cameron has big aspirations for “Avatar,” and here at Hero Complex we’re stepping up with some epic coverage plans: a 30-day countdown. Today’s topic: The USC professor who found himself on an unexpected Hollywood adventure when he was hired to create the language spoken by aliens on Cameron’s distant planet of Pandora. This modern era of moviemaking has plenty of peculiar challenges for actors — on green-screen sets, for instance, they have to watch a ping-pong ball hanging from a string and convince the camera that they actually staring down some magical beastie — but for the actors auditioning for “Avatar” the biggest challenge may have been reading a sheet of paper with words invented by a USC professor named Paul R. Frommer.

Spanish direct & indirect object pronouns Now that you’ve learned about direct and indirect object pronouns, what happens if you want to use them together? The sentences that follow are examples of both object pronouns being used together. The direct object is in bold, while the indirect object is underlined. • Does Hector give them to you? danger + opportunity ≠ crisis There is a widespread public misperception, particularly among the New Age sector, that the Chinese word for “crisis” is composed of elements that signify “danger” and “opportunity.” I first encountered this curious specimen of alleged oriental wisdom about ten years ago at an altitude of 35,000 feet sitting next to an American executive. He was intently studying a bound volume that had adopted this notorious formulation as the basic premise of its method for making increased profits even when the market is falling. At that moment, I didn't have the heart to disappoint my gullible neighbor who was blissfully imbibing what he assumed were the gems of Far Eastern sagacity enshrined within the pages of his workbook. Now, however, the damage from this kind of pseudo-profundity has reached such gross proportions that I feel obliged, as a responsible Sinologist, to take counteraction.

Name calling in China Mild Chinese insults can be funny and creative for some light-hearted teasing. To help with your Mandarin learning, we’ve compiled some of the best Chinese name-calling into three categories: bad eggs, nasty numbers, and colorful curses. These monikers can be used in times of frustration but also for playful teasing and even affection.