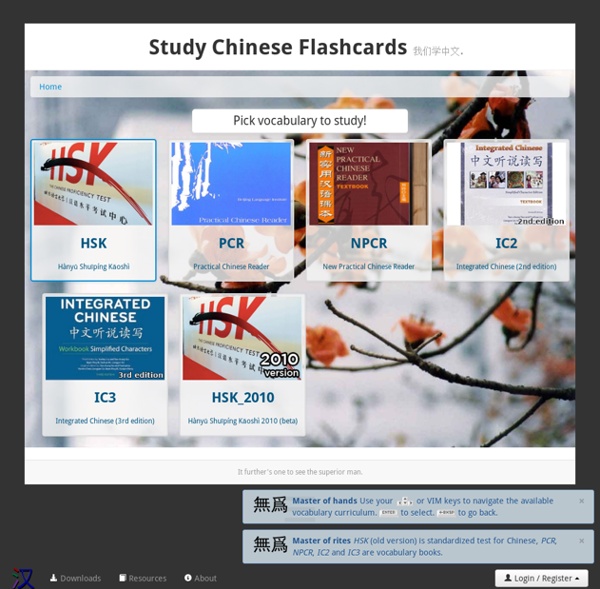 Best of Chinese Study Tools, Studying Chinese Online and Off Dictionaries come in three main categories: paper, hardware, and software. I would suggest noting that in the dictionary section, with forward references to wakan, plecodict, mandarintools, zdt, etc. In the "other" (software?) section, you missed both Dimsum from and zdt from They are both completely free, multifunction software tools, but, like wakan, have very good built in dictionary support for Chinese.

Internet Software for Learning Chinese Characters - Chinese Learning 中文学习互助 - China Forum Recently I started think seriously about studying chinese, I found some useful resources that other people may find useful. There are lots and lots of free software learning resources around, however I wanted to try and find a single resource with as much as possible in the same place. The software courses on these sites all have to be paid for, but they may be worth it if provides you with a convenient method of learning Hanzi. (1) This is perhaps my favourite resource, since it combines character drawing and audio for learning pronunciation. It also has a wide source of vocabulary lists. (2) This is a more flash-card type system, but it is better than a usual flashcard, in that there are inbuilt tests, as well as contecnt sentences.

Practical Chinese Reader Texts with sound Practical Chinese Reader Texts & Exercises with Sound Files Students are expected to prepare all the following materials before their weekly classes. Click the links under "Lessons" to listen and read the texts. Learn How to Read & Write Chinese Characters Chinese Character Tutorial If you're interested in reading and writing Chinese characters, there's no better place to get started than with the numbers 1-10. They are quite simple to write, useful to know, and are exactly the same in both the traditional and simplified writing systems. So grab a piece of paper and a pencil, give a click on the links below, and try to write the characters with proper stroke order as demonstrated:

Change of tone - Mandarin Chinese I Word placement can often change the tone of a word. For example, the word 你好 (hello) represents two characters with third tone distinction. However, when they are combined, the tone of the first word changes without affecting or changing the meaning. Pitch Perfect Pinyin Each Chinese character is represented by a syllable and an accompanying tone; some characters may have more than one way to pronounce them. A syllable consists of a. an initial + a final b. a final without an initial

moca The Serie of Events Overview:Being a breathtaking natural phenomenon and one of the origins of ancientChinese history, the Three Gorges is also famous for the massive Three GorgesProject and the socioeconomic changes that it has brougt to the country. Thereare a great diversity of texts and pictures of the Three Gorges which makelater works either be influenced by them or attempt to resist them. Every shotand every story-telling, not only make comparisons between the past and thepresent, but also enable images to talk with each other.

Popular Chinese Websites Every country has its own favorite websites, but it seems like certain global titans are big everywhere – you’ve got your Googles, YouTubes, Spotify’s, Reddits, Wikipedias, etc. Except, that is, in China. For a variety of reasons, the Chinese web functions almost like an intranet. You’ve probably read about some of the foreign sites that are blocked here, but you may not know about the hugely popular Chinese sites and services that are essentially unheard of elsewhere. Today we’ll take a look at the most popular sites, whose user bases often dwarf their more famous Western counterparts, and even the efforts of certain services (namely Weixin) to expand internationally. 1.

Friends of Jade - Current Articles - Jades from major archaeological discoveries in China in 2003 and 2004 The State Administration of Cultural Heritage of China publishes each year, through Wenwu Publishing House (www.wenwu.com), a catalogue listing summarized details and pictures of the key archaeological discoveries. After the update on 2005 discoveries, uploaded onto our homepage in August this year, I bring you now information on the jaders of the 2003 and 2004 discoveries. I have selected the informations and pictures concerning jades. These informations are quite important because they come from controlled excavations and define ages, shapes, colors and locations and serve as benchmarks when and what colors, styles and shapes where used and at what locations The excavation at the Niuheliang site of the Hongshan Culture period (4000-2700BC) in the Liaoning Province in North-Eastern China revealed 13 tombs with over 30 jades. In the tomb M4 of an adult male, jades in the shape of a phoenix, a jade tube (hair sheat for burial), a bracelet, a human figure and two rings where found.