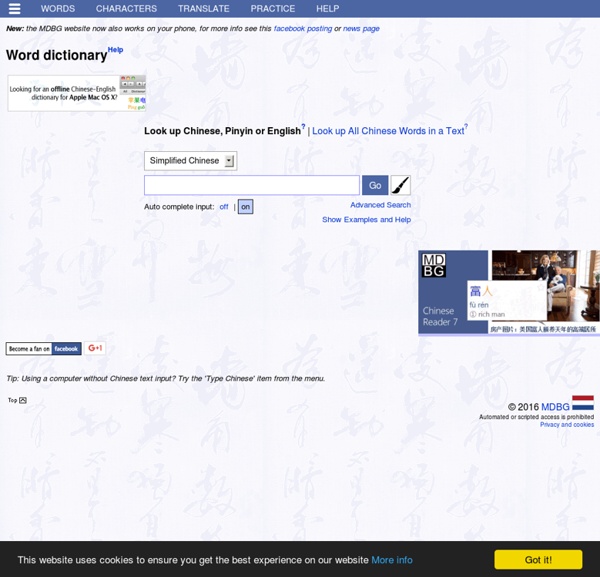 danger + opportunity ≠ crisis There is a widespread public misperception, particularly among the New Age sector, that the Chinese word for “crisis” is composed of elements that signify “danger” and “opportunity.” I first encountered this curious specimen of alleged oriental wisdom about ten years ago at an altitude of 35,000 feet sitting next to an American executive. He was intently studying a bound volume that had adopted this notorious formulation as the basic premise of its method for making increased profits even when the market is falling. At that moment, I didn't have the heart to disappoint my gullible neighbor who was blissfully imbibing what he assumed were the gems of Far Eastern sagacity enshrined within the pages of his workbook.

Chinese to Pinyin/Zhuyin Converter with Pronunciation Recent Updates (20/09/2019): 1. For convert file function, now you can choose the location of the phonetics (on the top of Chinese characters, on the bottom of Chinese characters, or on the right side of each Chinese words). 2. Add sorting function on the Word List sidebar. 3. In the Copy result popup, now you can choose whether to keep the non-Chinese characters (e.g. English words, punctuations) in the phonetics. How to use this Chinese to Pinyin/Zhuyin Conversion Tool: This tool allows you to convert Chinese text into Pinyin/Zhuyin, which are the two most common Chinese phonetic systems.

The DNA of a Successful Book Today’s graphic illustrates the ‘perfect’ book. A piece of literature that pleases a broad crowd a lot like pop music. Just like pop music’s 3 minute song, best selling books have a normal length of a little less than four hundred pages. Men are more likely to read a story with a male protagonist, yet a publication with women protagonists are much more likely to become a big hit. Chinese phrasebook Mandarin Chinese is the official language of Mainland China and Taiwan, and is one of the official languages of Singapore. In English, it is often just called "Mandarin" or "Chinese". In China, it is called Putonghua (普通话), meaning "common speech", while in Taiwan it is referred to as Guoyu (國語), "the national language." It has been the main language of education in China (excluding Hong Kong and Macau) since the 1950s. Standard Mandarin is close to, but not quite identical with, the Mandarin dialect of the Beijing area.

Mandarin Chinese Pinyin Chart with Audio - Yabla Chinese About Pinyin Hanyu Pinyin is the official system to transcribe Mandarin Chinese sounds into the Roman alphabet. It was invented in 1950s, and adopted as a standard in mainland China in 1958. Pinyin is used for several purposes, such as teaching Chinese, transcribing names and places into the roman alphabet, and used as an input method for typing Chinese characters. Pinyin is not the only system devised to transcribe Chinese sounds into roman letters.

7 Resources for Handling Digital Life After Death This post originally appeared on My Life Scoop, where Mashable regularly contributes articles about using social media and technology for a more connected life. Death is a fact of life. When someone dies, they're no longer physically here, but their digital self lives on. Learn Chinese with innovative Chinese writing worksheets and powerful online Chinese English dictionary - Chinese-English Dictionary Radical Table - Simplified Chinese Pinyin table Pittacus Lore talks 'Rise of Nine' When Lorien elder Pittacus Lore called me earlier this week, I had a hard time understanding him at first. Of course it was due to the voice-changer he was using to hide his identity, as he is in the midst of a high-stakes, intergalactic battle against the Mogadorians. At great personal risk, Lore spoke to EW about his new book Rise of Nine (Aug. 21) in the Lorien Legacies series. He also shared his thoughts on the I Am Number Four movie and what Loriens like to read and watch. Also read on for news of Lore’s possible book signing appearances in the future.