Chinese language. Rhyming and word confusion is a strange thing in Chinese. 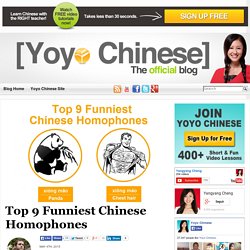 When you study it from a foreign perspective, things that seem SO similar, say fǎn cháng (反常, unusual) and fān chàng (翻唱, cover song) are, to native speakers, completely different. Since we tend to learn pinyin before characters, words with the same pinyin but different tones may look homophonous to us but not to natives. That said, there are still plenty of homophones (known in Chinese as tóng yīn cí (同音词), literally “same sound words”, and near-homophones that are linguistically interesting and can even be used for comic effect. 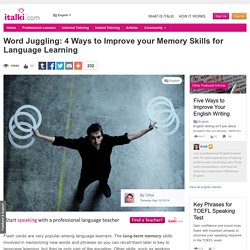 The long-term memory skills involved in memorizing new words and phrases so you can recall them later is key to language learning, but they’re only part of the equation. Other skills, such as working memory and fluid intelligence, factor in as well. Fluid intelligence is the ability to problem-solve in unique situations. If you gave me 100 flashcards with the most commonly spoken words in your target language (and the necessary rules of grammar to be able to put them together), I could give you back countless sentences you’ve never heard before, all made up of words you are familiar with.

Understanding the meaning of these sentences requires fluid intelligence, not just remembering the meanings of the individual words. Become a Word Juggler The mental skills involved in decoding the speech of a native are a lot like the skills involved in juggling. Think of the clubs being passed to the juggler as words in a spoken sentence. Phrases - Personal. Mandarin Sex Phrasebook. Common Pinyin Pronunciation Mistakes. Learn Chinese -Learn Mandarin : the right word to say about playing musical instruments in Chinese: musical instrument vocabulary and chui1 吹, la1 拉, qiao1 敲, da3 打 and tan2 弹. Also the history of Chinese musical instruments and complete Chinese musical t.

In English you can use the verb “play” for any musical instruments : piano, cello, violin, or clarinet. 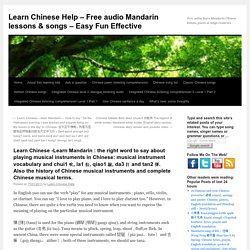 You can say “I love to play piano, and I love to play clarinet too.” However, in Chinese, there are quite a few verbs you need to know when you want to express the meaning of playing on the particular musical instrument. 3 Pro Tips to Practice Chinese Tones to Perfection. I heard it again just the other day: 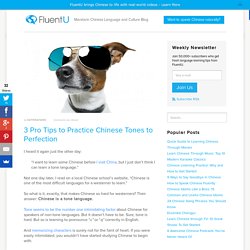 Pinyin Chart. Whats the difference between 当。。时候 and 当。。。时. When should I use which? - Learn Chinese (Mandarin) Meilleure Réponse - Choisie par le demandeur they're a little different . 1.When you leave, don't forget to lock the door.你走的时候不要忘记锁门。 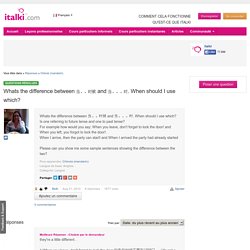 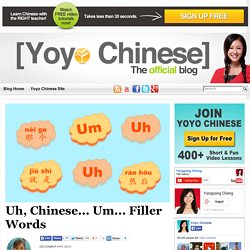 Filler words. Although you can practically make an entire sentence out of them, they don’t make for very impressive oratory. Chinese (Mandarin)/Slang - Wikibooks, open books for an open world. Mandarin, like any language, has its own slang words and informal meanings for some common words. 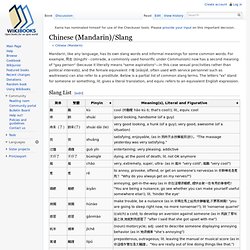 For example, 同志 (tóngzhì - comrade, a commonly used honorific under Communism) now has a second meaning of "gay person" (because it literally means "same aspirations"—in this case sexual proclivities rather than political interests), and the female equivalent 小姐 (xiǎojiě, often used with service personnel such as waitresses) can also refer to a prostitute. Below is a partial list of common slang terms. The letters "xx" stand for someone or something, lit. gives a literal translation, and equiv. refers to an equivalent English expression. Four Character Chinese Idioms. From the time of my Chinese wedding ceremony in early August until about a month ago, I fell off from my Supermemo study method. 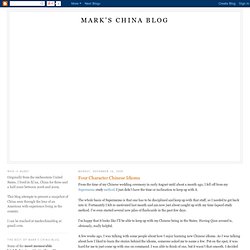 I just didn't have the time or inclination to keep up with it. The whole basis of Supermemo is that one has to be disciplined and keep up with that stuff, so I needed to get back into it. Fortunately I felt re-motivated last month and am now just about caught up with my time-lapsed study method. I've even started several new piles of flashcards in the past few days. I'm happy that it looks like I'll be able to keep up with my Chinese being in the States. 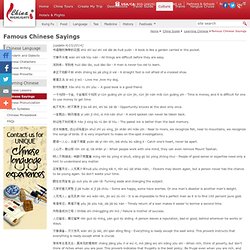 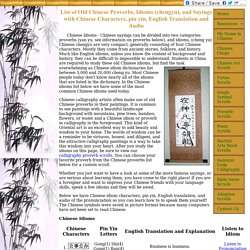 Chinese chengyu are very compact, generally consisting of four Chinese characters. Mostly they come from ancient stories, folklore, and history. Much like English idioms, unless you know the context of background and history, they can be difficult to impossible to understand. The Original Mandarin Poster : Mandarin Poster. China. China ( i/ˈtʃaɪnə/; Chinese: 中国; pinyin: Zhōngguó), officially the People's Republic of China (PRC), is a sovereign state located in East Asia. It is the world's most populous country, with a population of over 1.35 billion. The PRC is a single-party state governed by the Communist Party, with its seat of government in the capital city of Beijing.[15] It exercises jurisdiction over 22 provinces, five autonomous regions, four direct-controlled municipalities (Beijing, Tianjin, Shanghai, and Chongqing), and two mostly self-governing special administrative regions (Hong Kong and Macau).

The PRC also claims Taiwan – which is controlled by the Republic of China (ROC), a separate political entity – as its 23rd province, a claim which is controversial due to the complex political status of Taiwan.[16] Etymology History Prehistory Early dynastic rule. Chinese number gestures. Chinese number gestures 汉字数字手势 refers to the Chinese method of using one hand to signify the natural numbers one through ten. This method may have been developed to bridge the many dialects in spoken Chinese– for example, the numbers 4 (Chinese: 四; pinyin: sì) and 10 (Chinese: 十; pinyin: shí) are hard to distinguish in some dialects.

Some suggest that it was also used by businessmen during bargaining (i.e. to convey a bid by feeling the hand gesture in a sleeve) when they wish for more privacy in a public place. ChineseHour tells you more in details so that you can speak Chinese and make gestures at the same time. Methods While the five digits on one hand can easily express the numbers one through five, six through ten have special signs that can be used in commerce or day-to-day communication. The predominant [citation needed] system is as follows: Six - The little finger and thumb are extended, other fingers closed, sometimes with the palm facing the signer. Attention Bachelors: Describing Chinese Beauty.