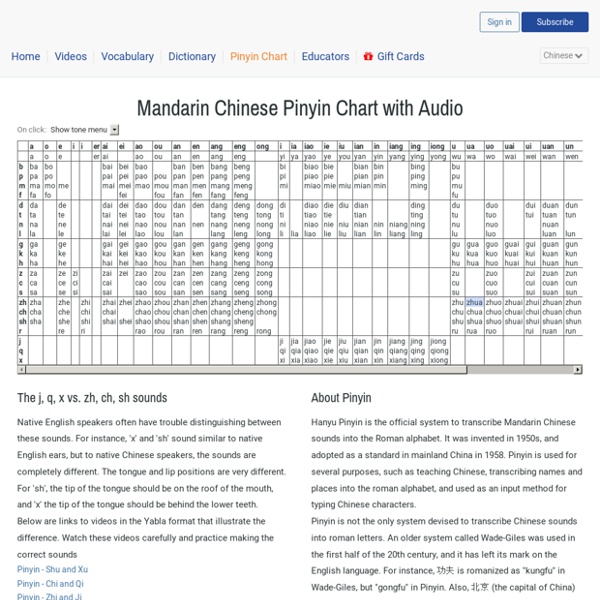 About Pinyin Hanyu Pinyin is the official system to transcribe Mandarin Chinese sounds into the Roman alphabet. It was invented in 1950s, and adopted as a standard in mainland China in 1958. Pinyin is used for several purposes, such as teaching Chinese, transcribing names and places into the roman alphabet, and used as an input method for typing Chinese characters. Pinyin is not the only system devised to transcribe Chinese sounds into roman letters. An older system called Wade-Giles was used in the first half of the 20th century, and it has left its mark on the English language. The j, q, x vs. zh, ch, sh sounds Native English speakers often have trouble distinguishing between these sounds. Below are links to videos in the Yabla format that illustrate the difference.

Learn Chinese with innovative Chinese writing worksheets and powerful online Chinese English dictionary - Chinese-English Dictionary Radical Table - Simplified Chinese Pinyin table Radical Table - Traditional The First 2000 Chinese Characters (bundle) A combination of our First 1000 and Second 1000 Chinese Characters Ebooks. Buy both books together and save a whopping 33% The definitive list of the most frequently used Mandarin Chinese characters, based upon the Chinese Ministry of Education’s official list, curated by us with love. Contains 4 books – Two for Simplified Chinese, Two for Traditional. Each book is over 200 pages long.

List of English terms of venery, by animal This is a list of English-language terms of venery (venery being an archaic word for hunting), comprising terms from a tradition that arose in the Late Middle Ages, at least partly from the Book of Saint Albans of 1486, a historic list of "company terms". The present list also includes more common collective terms (such as "herd" and "flock") for some animals. Standard terms for particular groups are listed first in each group and shown in bold. See also[edit]

How speaking multiple languages benefits the brain - Mia Nacamulli Amazed by what you have learned about having a bilingual brain? Then, start learning another language now! This website has tons of free lessons, games and quizzes to get you started! Pick one language or even two languages and get that gray matter growing. kids use language creatively Kids say the darnedest things. Especially when they are still very young and don't have a rich vocabulary but need to get their point across. They aren't afraid to experiment with language and come up with fresh, original sayings and that's awesome. At first, you may laugh when you hear them call dessert a "bonus round" and sheets "bed skins", but when you stop to really think about it, their versions actually make a lot of sense, too. So since there is no limit to children's imagination and their parents continue to upload their linguistic gems on the Internet, Bored Panda decided to make a follow-up to our older list '28 Times Kids Hilariously Renamed Things And Made Them Sound Way Better'. Enjoy!

The case of the missing "u"s in American English click 2x When my American editor asked me to research why Brits spell their words with so many extra ‘u’s, I immediately knew he had it all wrong. As a British journalist, it’s perfectly obvious to me that we have the correct number of ‘u’s, and that American spelling has lost its vowels along the way. “Color,” “honor,” and “favor” all look quite stubby to me—they’re positively crying out to be adorned with a few extra ‘u’s. But it turns out that the “o(u)r” suffix has quite a confused history. The Online Etymology Dictionary reports that –our comes from old French while –or is Latin. English has used both endings for several centuries.

Oxford Couldn't Pick Just One Word of the Year for an Unprecedented 2020 The Oxford report also highlights words and phrases relating to social justice, including “Black Lives Matter,” “Juneteenth,” “decolonize,” and “allyship,” some of which surged dramatically starting in late May, amid the protests following the killing of George Floyd in police custody. But those increases, while notable, were nowhere near those of pandemic-related terms. And the pandemic may have actually reduced the frequency of other topical words. Last year, Oxford released an all-climate related short list, topped by “climate emergency.”