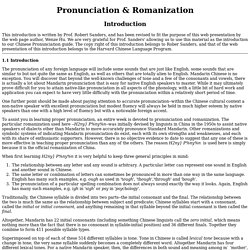 Robert Sanders, and has been revised to fit the purpose of this web presentation by the web page author, Wenze Hu. We are very grateful for Prof. Sanders' allowing us to use this material as the introduction to our Chinese Pronunciation guide. The copy right of this introduction belongs to Rober Sanders, and that of the web presentation of this introduction belongs to the Harvard Chinese Language Program. 1.1 Introduction The pronunciation of any foreign language will include some sounds that are just like English, some sounds that are similar to but not quite the same as English, as well as others that are totally alien to English.

To assist you in learning proper pronunciation, an entire week is devoted to pronunciation and romanization. When first learning H2ny} P%ny%n it is very helpful to keep three general principles in mind: The relationship between any letter and any sound is arbitrary. 1.2 Initials: -a: Chinese Language and Culture (China) Chinese for Beginners. Coursera. Memrise. Ten Online Resources for Learning Chinese - Reach to Teach. FSI Chinese Course - Free Chinese Course Online. The Chinese language (汉语/漢語 Hànyǔ, 华语/華語 Huáyǔ, or 中文 Zhōngwén) is a language or language family consisting of varieties which are mutually intelligible to varying degrees, with most of the varieties not being mutually intelligible. 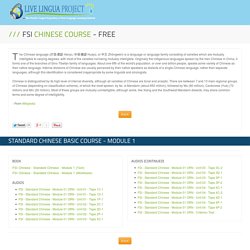 Originally the indigenous languages spoken by the Han Chinese in China, it forms one of the branches of Sino-Tibetan family of languages. About one-fifth of the world's population, or over one billion people, speaks some variety of Chinese as their native language. Learn Chinese - Tips, Tricks, Hacks, Software and Websites to make learning Chinese easier! CCTV Learn Chinese. FluentU - The Fun Way to Chinese Fluency. Chinese-Breeze: Unorthodox Language Learning Blog. 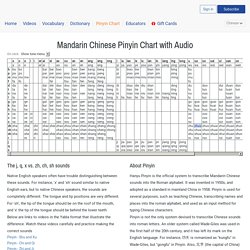 It was invented in 1950s, and adopted as a standard in mainland China in 1958. Pinyin is used for several purposes, such as teaching Chinese, transcribing names and places into the roman alphabet, and used as an input method for typing Chinese characters. Pinyin is not the only system devised to transcribe Chinese sounds into roman letters. An older system called Wade-Giles was used in the first half of the 20th century, and it has left its mark on the English language. The j, q, x vs. zh, ch, sh sounds Native English speakers often have trouble distinguishing between these sounds. Below are links to videos in the Yabla format that illustrate the difference. 5 mnemonic devices for reading Chinese characters.

To an outsider, the Chinese language “seems to be as impenetrable as the Great Wall of China,” says ShaoLan Hsueh in today’s talk, given at TED2013. 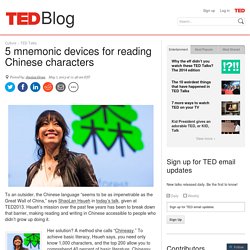 Hsueh’s mission over the past few years has been to break down that barrier, making reading and writing in Chinese accessible to people who didn’t grow up doing it. ShaoLan: Learn to read Chinese ... with ease! Her solution? A method she calls “Chineasy.” To achieve basic literacy, Hsueh says, you need only know 1,000 characters, and the top 200 allow you to comprehend 40 percent of basic literature. In her talk, Hsueh moves through eight foundational characters, describing mnemonic devices and showing artful depictions. These eight characters “are the building blocks for you to create lots more characters,” Hsueh explains. ShaoLan: Learn to read Chinese ... with ease! Skritter. Learning Chinese Online - Characters. How to Write Chinese Symbols for Food : How to Write "Bread" in Chinese Symbols. Basic Greetings in Mandarin Chinese: Hello, How Are You, Thank you, Good-bye etc. 你好！ 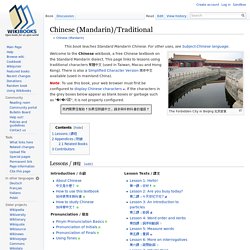 For other uses, see Subject:Chinese language. The Forbidden City in Beijing 北京故宮 . If the characters in the grey boxes below appear as blank boxes or garbage such as "?? 􏿾", it is not properly configured. Chinese For Dummies - Wendy Abraham. Global Studies and Languages. Reading speed: Learning how to read ten lines at a glance. I think most students feel that they want to read faster. 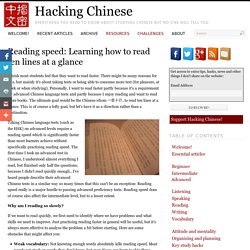 There might be many reasons for this, but mainly it’s about taking tests or being able to consume more text (for pleasure, at work or when studying). Personally, I want to read faster partly because it’s a requirement for advanced Chinese language tests and partly because I enjoy reading and want to read more books. The ultimate goal would be the Chinese idiom 一目十行, to read ten lines at a glance. This is of course a lofty goal, but let’s have it as a direction rather than a destination. Taking Chinese language tests (such as the HSK) on advanced levels require a reading speed which is significantly faster than most learners achieve without specifically practising reading speed. Why am I reading so slowly? If we want to read quickly, we first need to identify where we have problems and what skills we need to improve.

Weak vocabulary: Not knowing enough words absolutely kills reading speed. Benchmarking Setting reasonable goals. Learn Chinese - Grammar and Vocabulary. Chinese Lessons Chinese is the official language of over 1,1 billion people and, as a mother tongue, it is the most spoken language in the world. 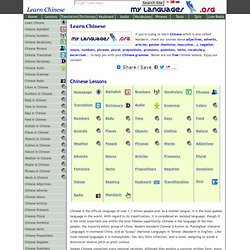 With regard to its classification, it is considered an isolated language, though it is the most important one within the Sino-Tibetan superfamily. Chinese is the language of the Han people, the majority ethnic group of China. Modern Standard Chinese is known as "Putonghua" (General Language) in mainland China, and as "Guoyu" (National Language) in Taiwan (Mandarin in English). Like most related languages it is monosyllabic, has very little inflection, and is tonal, assigning to words a distinctive relative pitch or pitch contour. Spoken Chinese comprises many regional varieties. The earliest Chinese characters were pictographs, such as a crescent for the moon, or a circle with a dot in the center to represent the sun.

We hope the lessons above helped you learn Chinese. Chinese Grammar Wiki. Chinese Quizzes and Chinese Trivia. Laokang® Tone Test 老康®考你声调. Chinese iPhone and iPad App. Looks like the Great Firewall or something like it is preventing you from completely loading www.skritter.com because it is hosted on Google App Engine, which is periodically blocked. 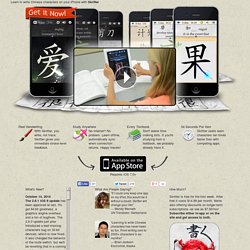 Try instead our mirror: www.skritter.cn Learn to write Chinese characters on your iPhone with Skritter Real Handwriting With Skritter, you write, not trace. Study Anywhere No internet? Every Textbook Don't waste time making lists. ChineseSongBook.com. The place to learn popular Chinese songs for free. Difference Between Chinese and Mandarin. Chinese vs Mandarin Chinese and Mandarin are used interchangeably. 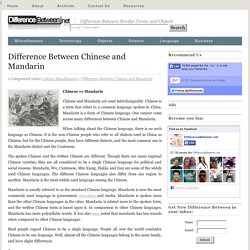 Chinese is a term that refers to a common language spoken in China. Mandarin is a form of Chinese language. One cannot come across many differences between Chinese and Mandarin. Is Rosetta Stone for Mandarin a good learning tool?