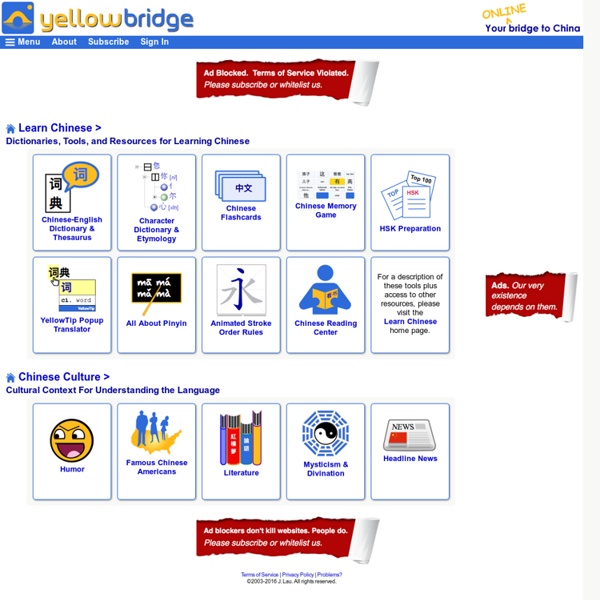 Our site is now usable on the iPhone, iPod Touch, and Android smartphones and music players. Use the same URL as usual. The webpages will adjust their layout to your device automatically and will generally support the same features as the desktop version. The iPad and Android tablets have been supported for awhile and will continue to display the same full size webpage normally displayed your laptop or desktop computer.

Why Do Most Languages Have So Few Words for Smells? Describe a banana. It's yellow, perhaps with some green edges. When peeled, it has a smooth, soft, mushy texture. The second round of Chinese character simplification By Olle Linge Updated April 30, 2015. The history of Chinese characters is fascinating. Over thousands of years, characters have changed a lot, from being simple symbols to making up the component parts of a complete writing system. One of these changes took place fairly recently, in the middle of the previous century. In the 1950s and 1960s, the first round of simplification was introduced in China, which created what we today usually call "simplified characters" in English.

How speaking multiple languages benefits the brain - Mia Nacamulli Amazed by what you have learned about having a bilingual brain? Then, start learning another language now! This website has tons of free lessons, games and quizzes to get you started! Pick one language or even two languages and get that gray matter growing. 34 Welsh words and phrases that are just as good as popty ping 1. Wnco mwnco It means: Him over there How you say it: Oon-core moon-core 2. Glossary - Chinese Grammar Wiki We strive to avoid unnecessarily technical terms on the Chinese Grammar Wiki, but occasionally it's sort of necessary, and sometimes even useful (yes, really!). So to help you out, we've placed all of the grammatical terms related to Mandarin Chinese in one place. Click through each link for a more complete description of each term. Many pages also have lists of grammar points related to the term.

What is a milkshake duck? And why isn't it the word of the year? In June 2016, Twitter user @PixelatedBoat coined a neologism that was arguably robbed as Oxford Dictionaries’ 2017 word of the year: “Milkshake duck”. The tweet went viral for neatly describing a now familiar arc, where the internet rushes en masse to embrace something or someone as cute, worthy, fun or funny – then just as quickly drops it, when it’s revealed to somehow be unpleasantly complicated. In just 140 characters, as was the style at the time, @PixelatedBoat encapsulated social media’s inclination to cast heroes and villains in black and white; to gloss over nuance and pay for it later; its short-sightedness, its fickleness, its breakneck pace, and its penchant for animals doing human things.

酷我音乐_中国领先的在线正版音乐网站 G-Dragon代表作：Crayon211404257624 EXID代表作：up&down4024266858 Justin Bieber代表作：Baby257100261751 Melanie Martinez 代表作：Alphabet Boy251734347 Mandarin Chinese Pinyin Chart with Audio - Yabla Chinese About Pinyin Hanyu Pinyin is the official system to transcribe Mandarin Chinese sounds into the Roman alphabet. It was invented in 1950s, and adopted as a standard in mainland China in 1958. Pinyin is used for several purposes, such as teaching Chinese, transcribing names and places into the roman alphabet, and used as an input method for typing Chinese characters. Pinyin is not the only system devised to transcribe Chinese sounds into roman letters. An older system called Wade-Giles was used in the first half of the 20th century, and it has left its mark on the English language.

Hacknight: Better Mandarin Support in Quizlet There’s no way around it - Chinese Mandarin is hard to study on Quizlet. Mandarin doesn’t fit into the normal “Term” - “Definition” model that Quizlet's six study modes are based on. This is because learning a word in Mandarin requires learning the character (Hanzi), the pronunciation (through a romanization system called pinyin), as well as the corresponding English word. Languages of California – Survey of California and Other Indian Languages Two centuries ago, between 80 and 90 different languages were spoken within the boundaries of what is now the state of California. The indigenous languages of California belong to as many as 20 major language families; even accepting the controversial "Hokan" and "Penutian" groups, at least seven entirely unrelated language families are represented. For its size, California is linguistically the most diverse area of North America.

Untitled Document China abounds in rivers, lakes and water resources. Due to its topographical features, most rivers flow east or south into the ocean, thus forming vast outflow river valleys that constitute nearly two-thirds of the national total area. Most of them belong to the Pacific Valley and a small number fall into the Indian Ocean Valley. Languages- unlocking potential- young Africans click2x Africa is the home of 2144 languages. Oddly, most development theoreticians consider this a barrier to economic and social growth. Sociolinguists and educationists know better: the African continent’s multilingualism is a powerful resource. The problem begins at school, and continues right through the education system. This includes tertiary level.