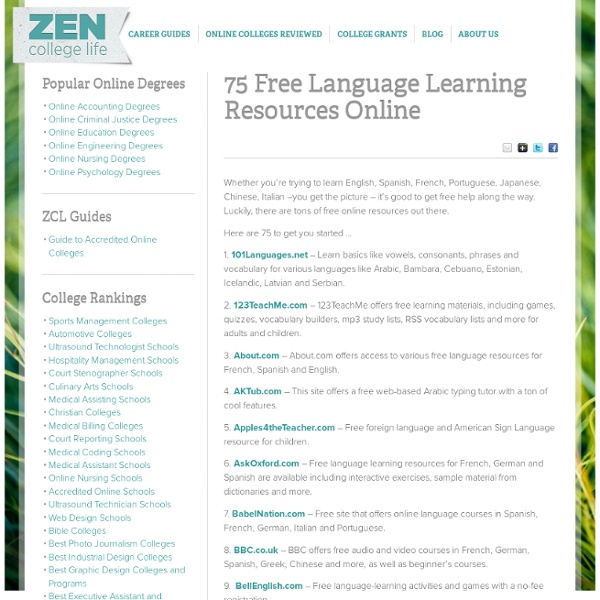 100 Free Foreign Language Classes Online March 1st, 2010 If you have always wanted to learn a language but were too put off by the high cost associated with most classes, then take a look at all these great opportunities to learn a foreign language online, at no cost to you. With so many learning opportunities online, it is a shame not to take advantage of all that you can, so be sure to spend some time with these classes. Whether you want to learn one of the major world languages or want something a little less popular, there are sure to be lessons here to help you start to speak whatever language you are interested in learning. French If you want to learn French, no matter your experience level, then check out these free classes.

21 Digital Tools to Build Vocabulary l Dr. Kimberly's Literacy Blog If you follow this blog, you know that I believe effective vocabulary instruction is just about the most important instructional activity for teachers to get right. For lots of reasons. Vocabulary influences fluency, comprehension, and student achievement. Any phonetic script can be learned in just a few hours If you liked my association technique mentioned below, you would also enjoy my tips on using imagination to memorize vocabulary, which are discussed in great detail with many other hacks in the Language Hacking Guide. See the most popular posts on the right below for other interesting topics. For those curious, this post discusses Thai, but the ideas can equally be applied to other phonetic scripts such as Japanese (but not as well for Chinese).

Ten Most Difficult Words to Translate Sometimes even the finest translators come up against words that defy translation. Many languages include words that don’t have a simple counterpart in another language. When translators come across such a word, they usually describe it so that it makes sense in the target language. Ukindia Learn Sanskrit Lesson 1 Paperhelp to help you write papers Lesson 2 ..Home....Asian Books..Sanskrit lessons ( external)..Tamil.Gujarati. Punjabi. Hindi.Urdu.SanskritArabic.Greek.English.

A Map of Lexical Distances Between Europe's Languages A Finn and a Spaniard walk into a bar. How do they strike up a conversation? It would be exceptional for either to speak each other's language. How Long to Learn That Language? Here’s a Map for That For English-speakers, Romanian is easier to learn than German. And you’ll be speaking Russian sooner than Hungarian. How is that? Because the Foreign Service Institute says so. Located in Arlington, Virginia, the FSI is the U.S. government’s main provider of foreign affairs training, including language courses.

Printable Flash Cards for Vocabulary Words-with Photographs Sluggish Sluggish audio/easy/sluggish.mp3 adjective lacking energy; inactive Verschlimmbesserung As Confucius says (Analects 58): "If terms are incorrect, language will be incongruous; and if language be incongruous, deeds will be imperfect... Hence, a man of superior mind, certain of his terms, is fitted to speak; and being certain of what he says can proceed upon it." Awhile back i encountered the German term Verschlimmbesserung--an "improvement" that makes things worse (via BetterThanEnglish dot com). Sanskrit Lexicon Page Kadaitswami: "Marketplace swami." A satguru of the Nandinatha Sampradaya's Kailasa Parampara. Born ca 1820; died 1875. Renouncing his career as a judge in Bangalore, South India, Kadaitswami became a sannyasin and trained under the "Rishi from the Himalayas," who then sent him on mission to Sri Lanka. He performed severe tapas on an island off the coast of Jaffna, awakening many siddhis. For decades he spurred the Sri Lankan Saivites to greater spirituality through his inspired talks and demonstration of siddhis.

The Greek Alphabet Phonology and Orthography Oops! Twenty-four letters only? Surely some sounds must be missing? That’s correct. There are sounds common in other languages that do not exist in Greek.