Memrise - the fun way to learn anything 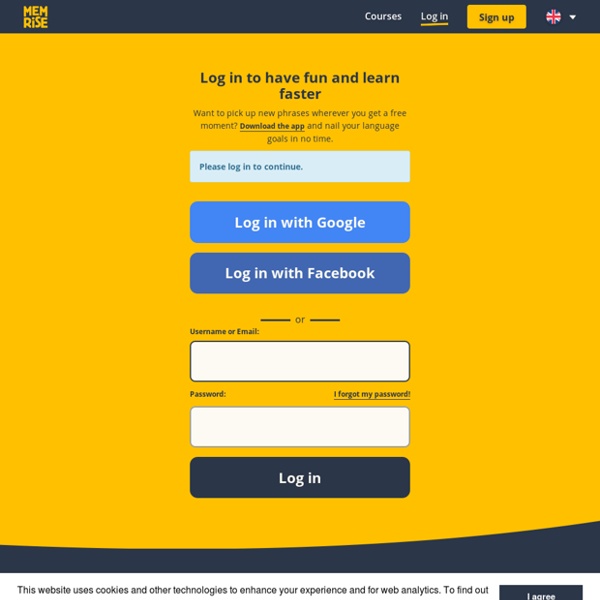 French Work Culture Five weeks vacation, recurring cigarette-espresso breaks and two hour lunches are among the stereotypes perpetuated about French work culture and I can say from experience, only two of three are still true today. Lingering over glasses of wine and copious lunch plates for two hours is a habit rapidly slipping from convention as is the notion that the French are unproductive. It occurred to me recently that my career actually began in France. I worked retail in the States throughout college but nothing full-time and nothing I intended to make a lifelong vocation.

Translating the Web While You Learn The creators of a website called Duolingo want to translate the world’s Web pages into new languages by harnessing the efforts of people who are learning those languages. If the approach sounds familiar, it’s because a similar idea is the basis of the effort known as reCAPTCHA, which was invented by the same Carnegie Mellon computer science professor behind the new project: Luis von Ahn. A recaptcha is a string of distorted text shown to a user trying to register for a new account or comment on a Web page; the text comes from electronically scanned print that could not be recognized by a computer. To gain permission, the user must reënter the words correctly. More than a hundred million recaptchas are solved each day. Von Ahn says that if he can capture even a small portion of that audience with Duolingo—say, a million users—he could translate all of Wikipedia’s English entries into Spanish in 80 hours.

Learn 46 Languages Online for Free How to learn languages for free? This collection features lessons in 48 languages, including Spanish, French, English, Mandarin, Italian, Russian and more. Download audio lessons to your computer or mp3 player and you’re good to go. Amharic Foreign Service Institute Basic Amharic – Audio – TextbookLessons with dialogues, drills, exercises, and narratives will teach you the basics of this language spoken in Ethiopia. Includes samples of speech, explanations of basic language structures, and a variety of practical exercises. The Media Network Monitor: How to watch Internet TV across borders Living in the U.S., one of my greatest regrets is that I can't watch BBC video with iPlayer. If I were living in the U.K., I'd feel the same away about not being able to watch shows on Hulu. But, with a Web proxy or a virtual private networks (VPN)s and an Internet Protocol (IP) address in a country where the content is available, you can watch these shows. All of these services block you from watching video by simply checking to see if your IP address is in the “right” country. Your IP address, under today's IPv4 Internet, can place you to a particular neighborhood, so it's trivial to see if you're in the proper nation.

isolatedmix 11 – Tripswitch « astrangelyisolatedplace I normally break into a cold sweat when listening to a mix without a tracklist. It’s one of those obsessive traits that forces me to shun potentially outstanding sets, the music geek in me cries in despair. But holding back wasn’t an option on this mix, for three reasons: One, the tracklist was coming (just not yet). Two, I’d already witnessed a tasty live set just weeks before. And three, Nick Brennans’s latest album hasn’t left my earphones for the past two weeks. 2005′s Circuit Breaker demonstrated Nick’s psychedelic and ethnic influences alongside his talent with a guitar – the signature piece within many of his productions. Aggregate, Curate and Create Your Own Textbook One of the latest buzz words in social media is curation. Some media analysts ponder whether the content curator might be the next big social media job of the future. The job of curator has spread across the digital media world and may already have replaced “editor” and “publisher” in the minds of marketers and social media mavens.

Image-based Language Lessons A few years ago I wrote about using CAPL (Culturally Authentic Pictorial Lexicon) as a resource for locating images to use in language lessons. Over the weekend Larry Ferlazzo wrote about CAPL's Pictolang service which prompted me to look at it again. CAPL now supports thirteen languages. Browse through the CAPL collection if you're looking for images to use in a world languages lesson. To find a Creative Commons licensed image to use in your lessons visit CAPL, click browse, then select your language to search for images that represent common words in that language. 8 Social Media Strategies for Your Classroom Are you ready to bring social networking to your classroom? If you’re looking to make your classroom more relevant, connected, and meaningful to your students, it’s the best place to start. Study after study has confirmed the benefits of networking.

Consumers given more copyright freedom - News It has previously been illegal in the UK to move copyrighted works from one device to another, such as from a CD to an MP3 player or an iPod. The new measures announed by government are designed to create a modern, robust and flexible copyright framework, whilst also protect the interests of authors and right owners. The changes could contribute at least £500m to the UK economy over 10 years, and perhaps much more from reduced costs, increased competition and by making copyright works more valuable. It will also be easier to create parodies of copyrighted works and for the purposes of quotation. They will also bring up to date existing exceptions for education, research and the preservation of materials.

11 ways Quizlet.com can supercharge your teaching What is Quizlet? Quizlet.com is a free website which enables teachers and students to create digital flash cards. That’s not where the magic stops, however. Quizlet can automatically generate interactive games and even tests of the material you enter into it.

Portraits made out of everyday objects Follow Bob on Tapiture Starting from a photograph, Bernard Pras takes ordinary objects like used toys, tools, pieces of rubber, or whatever else you can think of and turns them into masterpieces. From up-close his works look like nothing more than random stacks of stuff, but from a certain angle and distance, they reveal their true beauty. This method of art is known an anamorphosis. Running of the Bulls (Corrida de Toros) 7th/8th graders’ extension activity By guest blogger Alicia Alicia Quintero is a teacher from Chicago, USA, with years of experience teaching Spanish utilizing the International Baccalaureate model. She sent us this extension activity she did about the ‘Corrida de toros’ tradition and we just had to share it with you!

Great games for the language classroom: Blockbusters I‘m a gamer: I love using games in the language classroom. I find them such a great and versatile tool and, if used well, something that always goes down well with learners. I’ve discussed the role of games before on this blog and have probably summed up everything I want to say about the use of games in an article I wrote for Humanising Language Teaching back in April, 2011 (by which I mean I’m not going to go into great detail about the how and the why of using games in this post; please click on the HLT link for my huge article on this subject, OK!). So, why am I returning to this subject? Well, last night saw the triumphant return of EAP Chat, our bi-weekly discussion on Twitter relating to a subject of interest to EAP practitioners.

10 reasons to use games in language teaching Those of you who visit my blog regularly will know that I’m quite a fan of games and use them a lot in my classes. Indeed, I’ve written about them here on quite a few occasions, too (here I write about online games; here I give the ‘golden rules’ of using games; here’s a post about turning quizzes into games; this article is my big ‘why you should…’ argument laid out in full). While I would never suggest turning all of your classes into one long ‘gamesfest’, I will always argue that a good game can be not only justified, but should be regarded as an important part of your teaching repertoire.

I haven't checked that out yet. Thanks for the heads-up! by llavez Jun 15

Really useful site for remembering quotes, it has a Revengers Tragedy A-Level selection and a Hamlet one by sparky930 Jun 4