9 Websites You Can Use to Learn a Foreign Language - StumbleUpon 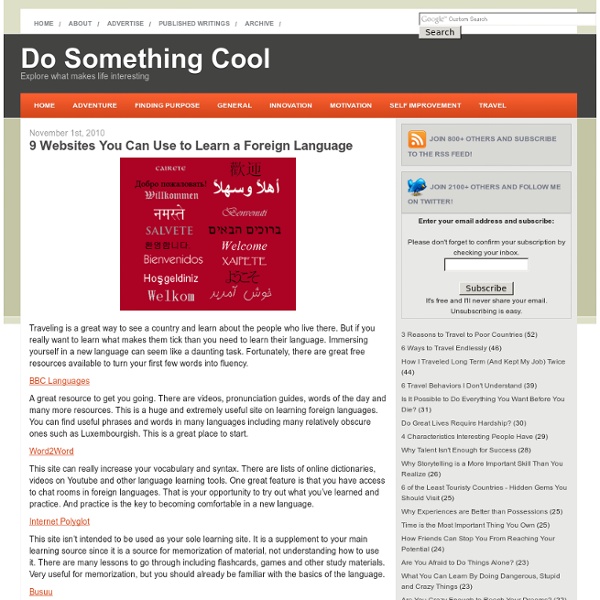 Traveling is a great way to see a country and learn about the people who live there. But if you really want to learn what makes them tick than you need to learn their language. Immersing yourself in a new language can seem like a daunting task. Fortunately, there are great free resources available to turn your first few words into fluency. BBC Languages A great resource to get you going. Word2Word This site can really increase your vocabulary and syntax. Internet Polyglot This site isn’t intended to be used as your sole learning site. Busuu A language learning community. Madinah Arabic Language Course This site was set up over 8 years ago specifically to teach Arabic for free. Livemocha Another learning language community. Skritter This site focuses on just Chinese and Japanese. Ethnologue Owned by SIL International, the Ethnologue is a listing of the known living languages of the world. My Happy Planet One more language community, but this one is different from the others. Related:  A Radical View of Chinese Characters

How I Became a Xenolinguist Wikiuniversity offers a wry definition of Xenolinguistics: “the scientific study of languages of non-human intelligences. Publications in this field tend to be speculative as few people have made the claim to have understood an alien language, at least not reliably.” The grand convergence of psychedelics and technology came in the summer of 1998. I was a grad student at RPI in communication and rhetoric, fully indoctrinated in (mostly French) critical theory, semiotics, new media theory, and the history of communication technology. The fictional world had established itself well enough that I could enter it, look around, and ask questions of the characters. Glide presented itself in the story-world as an alien language. When summer of 1998 was over, I did not have a visual language topic framed in terms of a semiotic or new media theory. Lily Pads Glide Maze Lily Glyph Blue Lily A series of software applications emerged from this process of psychedelic self-exploration. Like this:

Mappa dialetti italiani 21 Digital Tools to Build Vocabulary l Dr. Kimberly's Literacy Blog If you follow this blog, you know that I believe effective vocabulary instruction is just about the most important instructional activity for teachers to get right. For lots of reasons. Vocabulary influences fluency, comprehension, and student achievement. How’s that for starters? In addition, a broad vocabulary is important for effective speaking, listening, reading and writing. Vocabulary is a foundational component of an effective K-12 comprehensive literacy framework. I write frequently about the importance of effective vocabulary instruction and my recent infographic – the 10 Do’s and Don’ts of Effective Vocabulary Instruction – has proved very popular having been Pinned over 31,000 times. In today’s 21st century classrooms, digital tools must coexist alongside more traditional tools. Digital tools have advantages. The following digital tools show promise to support word learning, review, and playing with language. 21 Digital Tools to Build Vocabulary Reference Tools 1. 2. 3. 4. 5.

Software Translates Your Voice into Another Language Researchers at Microsoft have made software that can learn the sound of your voice, and then use it to speak a language that you don’t. The system could be used to make language tutoring software more personal, or to make tools for travelers. In a demonstration at Microsoft’s Redmond, Washington, campus on Tuesday, Microsoft research scientist Frank Soong showed how his software could read out text in Spanish using the voice of his boss, Rick Rashid, who leads Microsoft’s research efforts. In a second demonstration, Soong used his software to grant Craig Mundie, Microsoft’s chief research and strategy officer, the ability to speak Mandarin. Hear Rick Rashid’s voice in his native language and then translated into several other languages: English: Spanish: Italian: Mandarin: In English, a synthetic version of Mundie’s voice welcomed the audience to an open day held by Microsoft Research, concluding, “With the help of this system, now I can speak Mandarin.”