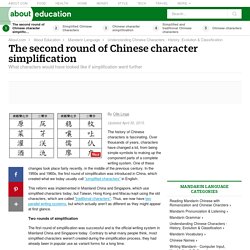 The history of Chinese characters is fascinating. Over thousands of years, characters have changed a lot, from being simple symbols to making up the component parts of a complete writing system. One of these changes took place fairly recently, in the middle of the previous century. In the 1950s and 1960s, the first round of simplification was introduced in China, which created what we today usually call "simplified characters" in English. This reform was implemented in Mainland China and Singapore, which use simplified characters today, but Taiwan, Hong Kong and Macau kept using the old characters, which are called "traditional characters". Two rounds of simplification The first round of simplification was successful and is the official writing system in Mainland China and Singapore today.

Continue reading below our video. 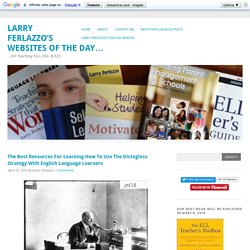 It can certainly be done a number of different ways but, very simply-put, the teacher reads a short text, often one students are familiar with. Then, after the first time of just listening, the teacher reads it again and students write down notes of what they have heard. Next, the teacher reads it a third time and, again, the student writes down additional notes. The student then compares his/her notes with another student’s notes and they work together to develop an accurate reconstruction of the text — one that is not necessarily the exact wording, but that demonstrates its meaning accurately.

Finally, the teacher reads it again and students judge how well they did. Again, there are many variations on how to implement this engaging instructional strategy. Here are few of the best resources that I’ve found on using the dictogloss strategy. Dictogloss Procedure is by Diane Tedick. Untitled Document. China abounds in rivers, lakes and water resources. 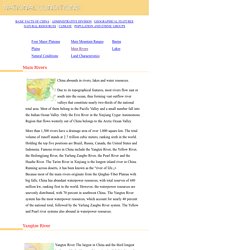 Due to its topographical features, most rivers flow east or south into the ocean, thus forming vast outflow river valleys that constitute nearly two-thirds of the national total area. Most of them belong to the Pacific Valley and a small number fall into the Indian Ocean Valley. Only the Erix River in the Xinjiang Uygur Autonomous Region that flows westerly out of China belongs to the Arctic Ocean Valley. More than 1,500 rivers have a drainage area of over 1,000 square km.

The total volume of runoff stands at 2.7 trillion cubic meters, ranking sixth in the world. Hacknight: Better Mandarin Support in Quizlet. There’s no way around it - Chinese Mandarin is hard to study on Quizlet. 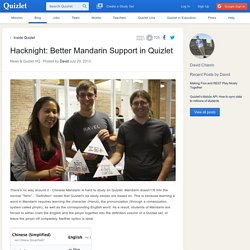 Mandarin doesn’t fit into the normal “Term” - “Definition” model that Quizlet's six study modes are based on. This is because learning a word in Mandarin requires learning the character (Hanzi), the pronunciation (through a romanization system called pinyin), as well as the corresponding English word. As a result, students of Mandarin are forced to either cram the English and the pinyin together into the definition column of a Quizlet set, or leave the pinyin off completely. Neither option is ideal. Enter Hack Night. The Challenge As we described above, Quizlet’s current term-definition model poses a challenge for Mandarin vocab students. 酷我音乐_中国领先的在线正版音乐网站. G-Dragon代表作：Crayon211404257624 EXID代表作：up&down4024266858 Justin Bieber代表作：Baby257100261751. 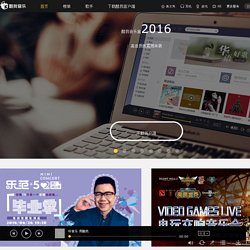 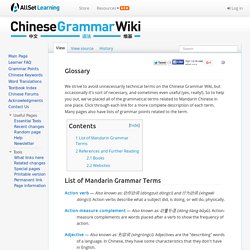 So to help you out, we've placed all of the grammatical terms related to Mandarin Chinese in one place. Click through each link for a more complete description of each term. Many pages also have lists of grammar points related to the term. Learn Chinese with free online lessons. Languages - Chinese - Chinese games - Tone game. Why Chinese Is So Damn Hard. (简体字：为什么中文这么TM难？) 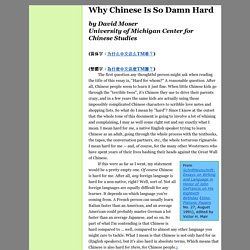 (繁體字：為什麼中文這麼TM難？) The first question any thoughtful person might ask when reading the title of this essay is, "Hard for whom? " A reasonable question. After all, Chinese people seem to learn it just fine. When little Chinese kids go through the "terrible twos", it's Chinese they use to drive their parents crazy, and in a few years the same kids are actually using those impossibly complicated Chinese characters to scribble love notes and shopping lists. If this were as far as I went, my statement would be a pretty empty one. Leading Mandarin Learning Resource Online. 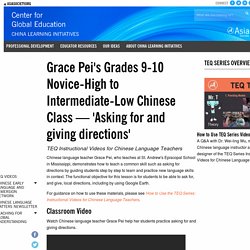 Andrew's Episcopal School in Mississippi, demonstrates how to teach a common skill such as asking for directions by guiding students step by step to learn and practice new language skills in context. The functional objective for this lesson is for students to be able to ask for, and give, local directions, including by using Google Earth. For guidance on how to use these materials, please see How to Use the TEQ Series: Instructional Videos for Chinese Language Teachers. 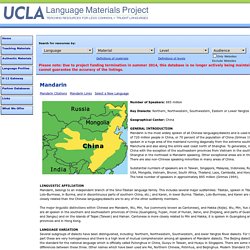 AP Chinese Language and Culture. Why Speak Chinese #WhySpeakChinese. How Long to Learn That Language? Here’s a Map for That. For English-speakers, Romanian is easier to learn than German. 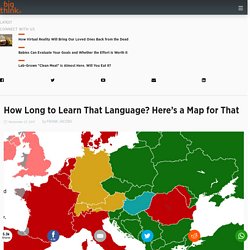 And you’ll be speaking Russian sooner than Hungarian. How is that? Because the Foreign Service Institute says so. Located in Arlington, Virginia, the FSI is the U.S. government’s main provider of foreign affairs training, including language courses. As the chief learning organisation for the State Department, the FSI is where diplomats go to study the languages they will need on foreign postings. This map shows how the FSI judges the difficulty of European languages. You won’t find any courses in Basque (the area straddling the Franco-Spanish border), Breton (in the ‘nose’ of France), Welsh (in, ehm, Wales) or Scots or Irish Gaelic in Arlington. English, by the way, is a ‘Category 0’ language (pink on the map), meaning that Americans are expected to be proficient in it. YellowBridge Chinese Language and Culture. China - TuneIn Radio. Marco Polo Project. CCTV节目官网首页. A better way of learning Mandarin. A better way of learning Mandarin.

Get a Chinese Name. Get your own Chinese name based on your English name and find out your sign in the Chinese Zodiac! Simply type in your first and last name, select what kind of characteristics you want to be expressed in the name, select your gender, enter your birthdate and press "Get a Name! ". Note that the namer will likely give a different name each time you use it.

You can read my explanation why this is. You can also read my privacy policy. Note: The names produced by this program may not be sold to others. Related Books. China Learning Initiatives. Instructional Videos for Chinese Language Teaching In addition to providing practical training for in-class development, Asia Society sees the need to develop a new generation of leaders in the Chinese education field.

Through our Teaching Fellows program, we aim to cultivate master teachers who can become mentors and exemplars to those new to the field. Each year, Asia Society selects 5–10 Chinese teachers as Teaching Fellows. Under the one-on-one professional consultation of Dr. Untitled. Interjections. In Chinese, we use informal interjections in many situations before we start a sentence. Let's look at some more examples here to help you better understand something of both the unique nuances in the Chinese language and of our people.

Just as in Informal Chinese Interjections (Part I) please note:1. The informal interjections don’t have any practical meanings.2. The tone of informal interjections changes according to the situation.3. The tone of each character is shown in the pinyin. 6. A. The Henry M. Jackson School of International Studies - Professional Development for Educators. Make a Difference. Make a Gift. Jackson School Outreach Resources for Language Teaching. Name calling in China. Mild Chinese insults can be funny and creative for some light-hearted teasing. To help with your Mandarin learning, we’ve compiled some of the best Chinese name-calling into three categories: bad eggs, nasty numbers, and colorful curses. These monikers can be used in times of frustration but also for playful teasing and even affection.

There is a Chinese expression that declares: dă shì qīn, mà shì ài (打是亲，骂是爱). Roughly translated, this means: Hitting is affection and scolding is love. Some may say that this is just an excuse for parents to spank and discipline their children. Chinese Story for Kids ∣Chinese Idiom Story for Kids, Chinese Language Newsletter-eChineseLearning. CQPweb Main Page. Learn Chinese. Anki - powerful, intelligent flashcards. 15 Smartphone Apps to Teach Yourself Chinese. Learning a new language is never easy, but Chinese can be one of the hardest for English speakers to master as it requires not only learning to speak a new language but also to read and write using an entirely different set of characters. Learners don’t have to go it alone, however. As the popularity of learning Mandarin has exploded over the past few years, so have the number of helpful resources catered to language learners that can aid in studying, learning, and practicing key language skills.

Even better, many of these resources are available over a smartphone, making it possible to learn at any time and from anywhere and often at no or a very low cost. China Learning Initiatives. Ignite Chinese. Chinese Language Studies. Chinese for Beginners.