Spotlight on China - Spotlight_on_China.pdf. Cultural Exchange China - The Netherlands. Lucrative Stardom in China, Using a Webcam and a Voice. Photo ZIGONG, China — Dolled up with makeup and a blond wig, the pretty young Chinese woman sat at home in her bedroom on a quiet Sunday evening and began singing karaoke. 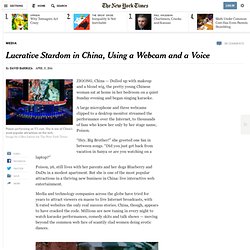 A large microphone and three webcams clipped to a desktop monitor streamed the performance over the Internet, to thousands of fans who knew her only by her stage name, Poison. “Hey, Big Brother!” She greeted one fan in between songs. “Did you just get back from vacation in Sanya or are you watching on a laptop?” Poison, 26, still lives with her parents and her dogs Blueberry and DuDu in a modest apartment. Media and technology companies across the globe have tried for years to attract viewers en masse to live Internet broadcasts, with X-rated websites the only real success stories. Continue reading the main story Video The shows are typically low-budget productions by amateur entertainers who work out of tiny apartments, fitted with webcams.

The websites mix video feeds with streaming-text commentary from the audience. 6 reasons why China getting game consoles won't be a windfall for Sony or Microsoft. This gaming post was originally published on our new sister site Games in Asia, which you should totally bookmark right now. 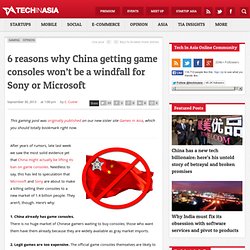 After years of rumors, late last week we saw the most solid evidence yet that China might actually be lifting its ban on game consoles. Needless to say, this has led to speculation that Microsoft and Sony are about to make a killing selling their consoles to a new market of 1.4 billion people. They aren’t, though. Here’s why: 1. 2. 3. Chinese Karaoke, an Introduction for Foreigners. Published on January, 2012 by Susana Muñoz in Asia-Pacific One of my favorite activities while in China, besides eating and shopping for shoes, is karaoke. 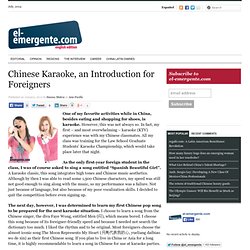 However, this was not always so. In fact, my first – and most overwhelming – karaoke (KTV) experience was with my Chinese classmates. All my class was training for the Law School Graduate Students’ Karaoke Championship, which would take place later that night. As the only first-year foreign student in the class, I was of course asked to sing a song entitled “Spanish Beautiful Girl”. The next day, however, I was determined to learn my first Chinese pop song to be prepared for the next karaoke situation. KTVs in China are nothing like the “Cantabar” format in Latin America. Here are some karaoke etiquette rules: Women should not sing men’s songs or vice versa. Business or pleasure, Asia's karaoke love lives on. HONG KONG - It's been a way to unwind and get a deal done in Asia for over 40 years; crooning like Sinatra, camping it up like Abba or rocking like Elvis, often to a room full of stone-faced men in suits. 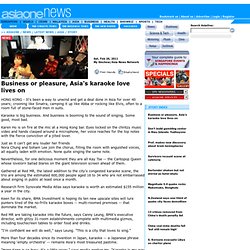 Karaoke is big business. And business is booming to the sound of singing. Some good, most bad. Karen Ho is on fire at the mic at a Hong Kong bar. Eyes locked on the chintzy music video and hands clasped around a microphone, her voice reaches for the top notes with the fierce conviction of a jilted lover. With Karaoke, A Deal in China For a Song - WSJ. 12 Facts About China’s Social Media. The spread of social media in China affects the ways Chinese communicate, get their news, shop for products and do pretty much everything else. 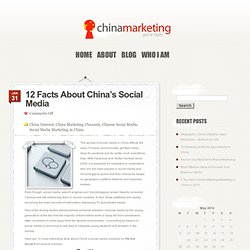 With Facebook and Twitter blocked since 2009, it is essential for marketers to understand who are the main players in social media and microblogging space and their relevance based on geography, platform features and business models. Even though, social media, search engines and microblogging remain heavily censored, Chinese are still embracing them in record numbers. In fact, those platforms are rapidly becoming the main sources of information displacing TV and printed media. One of the driving factors behind almost universal adoption of social media by the young generation is the fact that the majority of them either work or study far from hometowns, often hundreds of miles away from the familiar environment.

Connecting by means of social media is becoming a new way to integrate young students and workers in the society. Fact#1: Fact #2: Microsoft’s Xbox One China strategy has no guarantee of success, says analyst. Microsoft is poised to bring Xbox One to China in September, but one analyst feels that it’s a strategy fraught with potential risk. 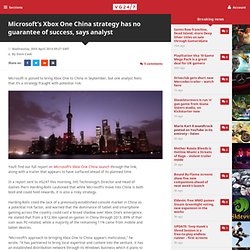 You’ll find our full report on Microsoft’s Xbox One China launch through the link, along with a trailer that appears to have surfaced ahead of its planned time. In a report sent to VG247 this morning, IHS Technology’s Director and Head of Games Piers Harding-Rolls cautioned that while Microsoft’s move into China is both bold and could hold rewards, it is also a risky strategy. Harding-Rolls cited the lack of a previously-established console market in China as a potential risk factor, and warned that the dominance of tablet and smartphone gaming across the country could cast a broad shadow over Xbox One’s emergence. China building world's first video game stadium. China is getting serious about eSports. 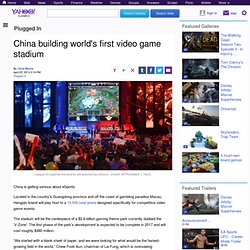 Located in the country's Guangdong province and off the coast of gambling paradise Macau, Hengqin Island will play host to a 15,000 seat arena designed specifically for competitive video game events. The stadium will be the centerpiece of a $2.8 billion gaming theme park currently dubbed the 'V-Zone'. The first phase of the park's development is expected to be complete in 2017 and will cost roughly $480 million. “We started with a blank sheet of paper, and we were looking for what would be the fastest-growing field in the world,” Chew Fook Aun, chairman of Lai Fung, which is overseeing development on the overall project, told Bloomberg. “The trends were with video gaming.”

Major League Gaming will run the stadium's operations, and events will be streamed on MLG.tv. Games had to prove their merit, though. But gaming is huge in China. It’s just the latest sign that eSports is here to stay. Here’s why Apple will bring iTV to China first - Quartz. If Tim Cook is to fully take reins from Steve Jobs, he’ll need to bet the company on his own grand product vision—one that suspends investors’ disbelief without affecting Apple’s stock price. 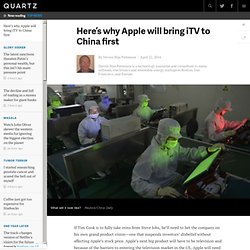 Apple’s next big product will have to be television and because of the barriers to entering the television market in the US, Apple will need to make its introduction in another world market, and China appears to be the best alternative. Apple needs a new product category that matches its $170 billion annual revenue scale. China releases censorship rules for console games, and there are a lot of them. C. 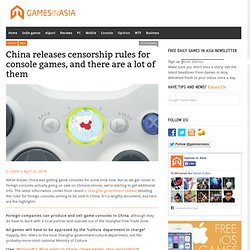 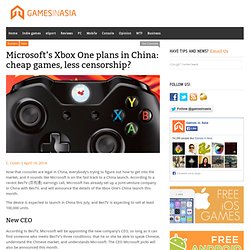 Custer | April 16, 2014 Now that consoles are legal in China, everybody’s trying to figure out how to get into the market, and it sounds like Microsoft is on the fast track to a China launch. According to a recent BesTV (百视通) earnings call, Microsoft has already set up a joint-venture company in China with BesTV, and will announce the details of the Xbox One’s China launch this month. The device is expected to launch in China this July, and BesTV is expecting to sell at least 100,000 units.