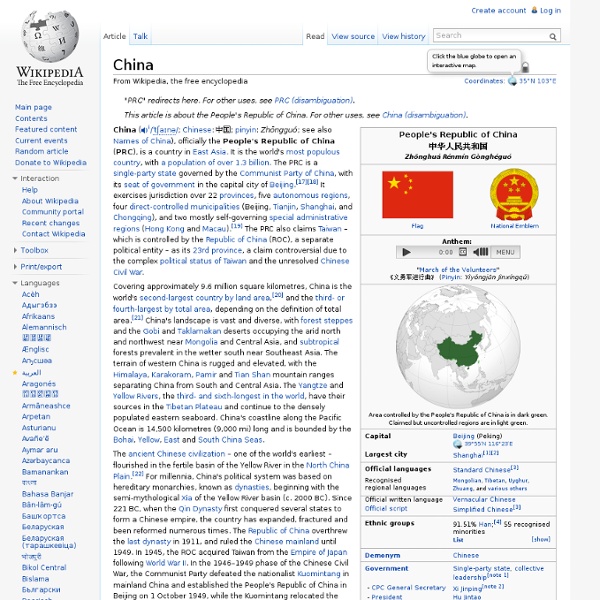 China ( i/ˈtʃaɪnə/; Chinese: 中国; pinyin: Zhōngguó), officially the People's Republic of China (PRC), is a sovereign state located in East Asia. It is the world's most populous country, with a population of over 1.35 billion. Covering approximately 9.6 million square kilometers, China is the world's second-largest country by land area,[17] and either the third or fourth-largest by total area, depending on the method of measurement. Etymology History Prehistory Archaeological evidence suggests that early hominids inhabited China between 250,000 and 2.24 million years ago.[31] A cave in Zhoukoudian (near present-day Beijing) exhibits hominid fossils dated at between 680,000 and 780,000 BCE.[32] The fossils are of Peking Man, an example of Homo erectus who used fire.[33] The Peking Man site has also yielded remains of Homo sapiens dating back to 18,000–11,000 BCE.[34] Some scholars assert that a form of proto-writing existed in China as early as 3000 BCE.[35] Early dynastic rule Imperial China

Northern and southern China Northern China and southern China[1] are two approximate regions within China. The exact boundary between these two regions has never been precisely defined. Nevertheless, the self-perception of Chinese people, especially regional stereotypes, has often been dominated by these two concepts, given that regional differences in culture and language have historically fostered strong regional identities (乡土, xiangtu, 'localism') of the Chinese people.[2] Extent[edit] Often used as the geographical dividing line between northern and southern China is the Huai River–Qin Mountains Line. This line approximates the 0°C January isotherm and the 800 millimetres (31 in) isohyet in China. Culturally, however, the division is more ambiguous. The Northeast (Manchuria) and Inner Mongolia, areas that are often thought of as being outside "China proper", are also conceived to belong to northern China according to the framework above. History[edit] Episodes of division into North and South include: Today[edit]

Chinese herbology Dried herbs and plant portions for Chinese herbology at a Xi'an market The term herbology is misleading in the sense that, while plant elements are by far the most commonly used substances, animal, human, and mineral products are also utilized. Thus, the term "medicinal" (instead of herb) is usually preferred as a translation for 药 (pinyin: yào).[2] The effectiveness of traditional Chinese herbal therapy remains poorly documented.[3] There are concerns over a number of potentially toxic Chinese herbs.[4] History[edit] Chinese herbs have been used for centuries. The first traditionally recognized herbalist is Shénnóng (神农, lit. The "superior" category, which includes herbs effective for multiple diseases and are mostly responsible for maintaining and restoring the body balance. The original text of Shennong's Materia Medica has been lost; however, there are extant translations.[6] The true date of origin is believed to fall into the late Western Han dynasty[5] (i.e., the first century BC).

Traditional Chinese medicine Traditional Chinese medicine (TCM; simplified Chinese: 中医; traditional Chinese: 中醫; pinyin: zhōng yī; literally: "Chinese medicine") is a broad range of medicine practices sharing common concepts which have been developed in China and are based on a tradition of more than 2,000 years, including various forms of herbal medicine, acupuncture, massage (Tui na), exercise (qigong), and dietary therapy.[1] It is primarily used as a complementary alternative medicine approach.[1] TCM is widely used in China.[1] The doctrines of Chinese medicine are rooted in books such as the Yellow Emperor's Inner Canon and the Treatise on Cold Damage, as well as in cosmological notions such as yin-yang and the five phases. Starting in the 1950s, these precepts were standardized in the People's Republic of China, including attempts to integrate them with modern notions of anatomy and pathology. In the 1950s, the Chinese government promoted a systematized form of TCM.[11] History[edit] Yin and yang[edit] Qi[edit]