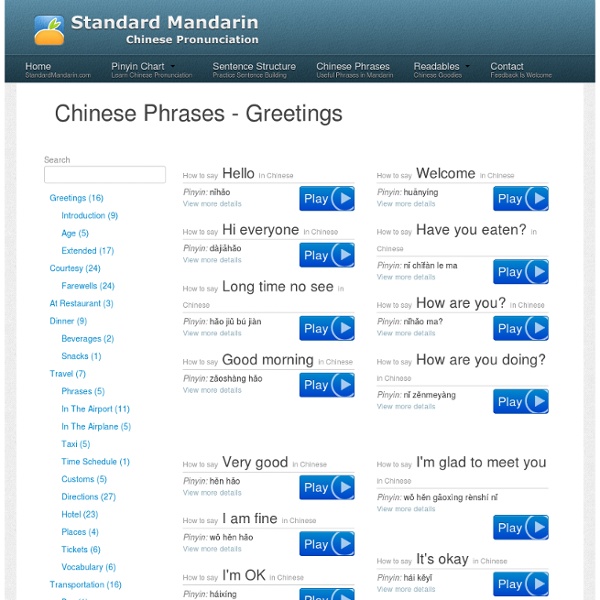 Pronunciation of Mandarin Chinese\ Introduction The purpose of this section is to clarify some important issues regarding the pronunciation of Mandarin Chinese. I have noticed over the years that some sources are publishing incorrect information about Mandarin pronunciation. Chinese phrasebook Mandarin Chinese is the official language of Mainland China and Taiwan, and is one of the official languages of Singapore. In English, it is often just called "Mandarin" or "Chinese". In China, it is called Putonghua (普通话), meaning "common speech", while in Taiwan it is referred to as Guoyu (國語), "the national language." It has been the main language of education in China (excluding Hong Kong and Macau) since the 1950s.

English to Chinese dictionary Examples and Help Example queries: hello, nihao, ni3hao3, 你好, rest*, zei*, *zei*, *茶, 英*公司, chinese *文, "to rest", bill -gates Pinyin words should be entered without spaces, either with or without tone numbers: ni3hao3 or nihao. The character ü can be entered as v instead. The asterisk character * can be used as a wildcard to match zero or more characters:

Zhongwen Red - Free Online Mandarin Chinese Lessons Why Chinese Is So Damn Hard (简体字：为什么中文这么TM难？) (繁體字：為什麼中文這麼TM難？) The first question any thoughtful person might ask when reading the title of this essay is, "Hard for whom?" China Resources Page <p><span>If you can see this line, then JavaScript is turned off on your machine and you will not be able to use some features of this site. Please click <a href="../securitywarning.html">here</a> for more information. Introduction to chinese characters Writing was probably invented in China during the latter half of the 2nd millenium BC. The earliest recognisable examples of written Chinese date from 1500-950 BC (Shang dynasty) and were inscribed on turtle shells used for divination. The turtle shells were heated, then inspected, the resulting cracks determining answers to one's questions. In the beginning of the 20 th century, Wang Yirong discovered on a turtle shell that he had been prescribed by a pharmacy, symbols that looked like writing on some "dragon bones". He was the first to discover these oracle bones, which have been preciously collected as testimony of the beginning of the chinese writing. How many characters?

What the Chinese eat for breakfast. Unplug your toaster, finish that cup of coffee and leave those bacon cravings behind; you're in China now, where breakfast is like nothing you've tasted before. There are dozens and dozens of breakfast combos in China that differ widely from each other depending on which part of the country you're travelling in, but they all seem to have three things in common: they're incredibly filling (no sugar-coated puffs of air here), fabulously fresh (often cooked in front of your eyes as soon as you order) and brilliantly cheap (if you pay more than US$1 for your breakfast in China, chances are you're being ripped off). So before you skulk on down to your hotel lobby to grab what's left of that disappointingly lukewarm morning buffet, check out this delectable bunch of proper Chinese breakfasts:

Learn Chinese online - Free Chinese lessons - Speak Chinese Chris (31-03-2014): Thank you. As a Chinese person born and raised in another country and not being taught to speak or learn Mandarin, you have given me a chance to learn mandarin. Thank you Patrick MacLeod (10-02-2014): Hi I would like to expand my knowledge of cultures and different races I would ultimately like aim for a job as a translator or similar thanks John (03-02-2014): I would not mind learning and living in china but I am only a simple tradesman.

Jordan: The Chinese Language(s) An Overview for Beginners Note: This essay should tell you more than you need or want to know about the Chinese language in general. For the pronunciation of Romanized Mandarin, see the "Pronunciation Guide" on this web site. Popular Chinese Websites Every country has its own favorite websites, but it seems like certain global titans are big everywhere – you’ve got your Googles, YouTubes, Spotify’s, Reddits, Wikipedias, etc. Except, that is, in China. For a variety of reasons, the Chinese web functions almost like an intranet. You’ve probably read about some of the foreign sites that are blocked here, but you may not know about the hugely popular Chinese sites and services that are essentially unheard of elsewhere. Today we’ll take a look at the most popular sites, whose user bases often dwarf their more famous Western counterparts, and even the efforts of certain services (namely Weixin) to expand internationally. 1.