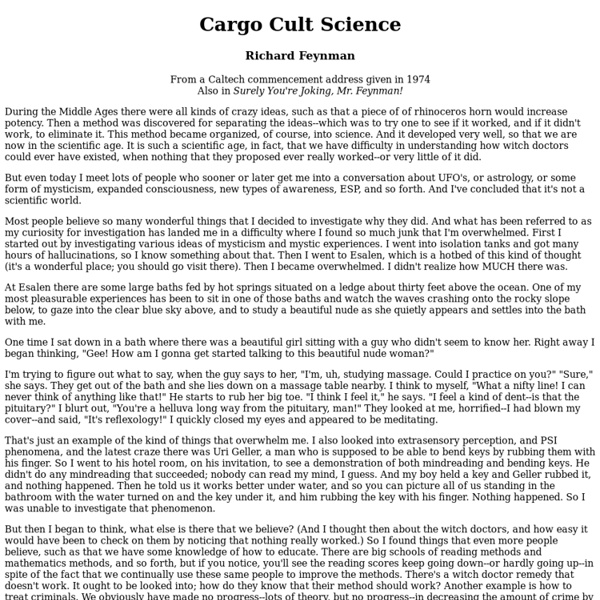 Richard Feynman From a Caltech commencement address given in 1974 Also in Surely You're Joking, Mr. Feynman! During the Middle Ages there were all kinds of crazy ideas, such as that a piece of of rhinoceros horn would increase potency. Then a method was discovered for separating the ideas--which was to try one to see if it worked, and if it didn't work, to eliminate it. This method became organized, of course, into science. But even today I meet lots of people who sooner or later get me into a conversation about UFO's, or astrology, or some form of mysticism, expanded consciousness, new types of awareness, ESP, and so forth. Most people believe so many wonderful things that I decided to investigate why they did. At Esalen there are some large baths fed by hot springs situated on a ledge about thirty feet above the ocean. One time I sat down in a bath where there was a beautiful girl sitting with a guy who didn't seem to know her. Yet these things are said to be scientific.

Eric Weinstein may have found the answer to physics' biggest problems Two years ago, a mathematician and physicist whom I've known for more than 20 years arranged to meet me in a bar in New York. What he was about to show me, he explained, were ideas that he'd been working on for the past two decades. As he took me through the equations he had been formulating I began to see emerging before my eyes potential answers for many of the major problems in physics. It was an extremely exciting, daring proposal, but also mathematically so natural that one could not but feel that it smelled right. Opinion: Open access aids science research - Rep. Jim Sensenbrenner No one likes paying for the same thing twice. This holds true for federally funded scientific research. For years, scholarly journals have relied on taxpayers paying for research on the front end and access to the results on the back. It is past time to embrace an open access policy for scientific research. In fiscal year 2012, Washington spent nearly $139 billion of taxpayer money on federal research and development activities — a significant investment in the age of record deficits, growing debt and an ill-advised sequester.

The Case for Parallel Universes Editor's note: In the August issue of Scientific American, cosmologist George Ellis describes why he's skeptical about the concept of parallel universes. Here, multiverse proponents Alexander Vilenkin and Max Tegmark offer counterpoints, explaining why the multiverse would account for so many features of our universe—and how it might be tested. Welcome to the Multiverse By Alexander Vilenkin

Car Lease Takeover - Lease Transfer - How does it work? What is a car lease takeover or lease transfer? How does it work? In a tough economy, automotive consumers look for affordable ways to drive the cars they need and want. Lease takeovers, or lease transfers, are increasingly providing the ideal answer for many of these consumers. Although lease transfers have been around for years, it has now become the hottest new way to acquire a late model automobile at the lowest possible cost. Here's how a car lease takeover works Someone who is currently leasing a car wants out of their lease. Lessness: Randomness, Consciousness and Meaning Elizabeth Drew and Mads Haahr This paper was presented at the 4th International CAiiA-STAR Research Conference ‘Consciousness Reframed’ in Perth, Australia, 1-4 August 2002. A PDF version is also available.

Astronomy Without A Telescope – Star Formation Laws Want to stay on top of all the space news? Follow @universetoday on Twitter NGC 1569 - a relatively close (11 million light years) starburst galaxy - presumably the result of some fairly efficient star formation processes. Credit: NASA/HST. Take a cloud of molecular hydrogen add some turbulence and you get star formation – that’s the law. The efficiency of star formation (how big and how populous they get) is largely a function of the density of the initial cloud.

Gödel, Escher, Bach Gödel, Escher, Bach: An Eternal Golden Braid (commonly GEB) is a book by Douglas Hofstadter, described by the author as "a metaphorical fugue on minds and machines in the spirit of Lewis Carroll".[1] On its surface, GEB examines logician Kurt Gödel, artist M. C. How Aging Might Have Evolved A new evolutionary computer model demonstrates how aging might have evolved as an evolutionary adaptation. When the environment is changing rapidly, natural selection can favor a higher population turnover rate, and, under some circumstances, the benefit may outweigh the cost to the individual – who dies of old age and cuts short her reproduction. In a paper published this week in PLoS One, André Martins[1] of University of Sao Paolo, Brazil, demonstrates this phenomenon and explains why it might be important. The idea that aging might be an evolutionary adaptation looks very attractive from the standpoint of genetics. The rate of aging is programmed into genes, at least some of which seem to be ancient and highly-conserved.

Merging with Siva, Chapter 13: Five Steps to Enlightenment Monday LESSON 85 Step One: Attention The grand old man of the East who ordained me, Jnanaguru Yoganathan, Yogaswami of Jaffna, used to say time and time again, "It was all finished long ago." It's finished already.