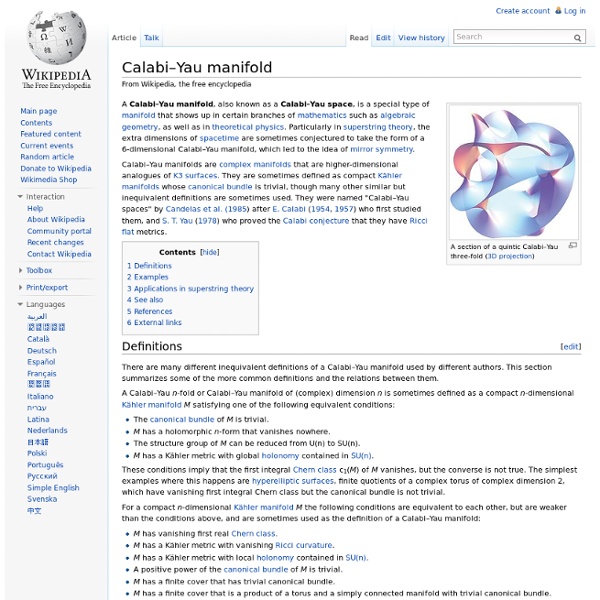 A 2D slice of the 6D Calabi-Yau quintic manifold. Calabi–Yau manifolds are complex manifolds that are higher-dimensional analogues of K3 surfaces. They are sometimes defined as compact Kähler manifolds whose canonical bundle is trivial, though many other similar but inequivalent definitions are sometimes used. They were named "Calabi–Yau spaces" by Candelas et al. (1985) after E. Calabi (1954, 1957) who first studied them, and S. T. Definitions[edit] There are many different inequivalent definitions of a Calabi–Yau manifold used by different authors. A Calabi–Yau n-fold or Calabi–Yau manifold of (complex) dimension n is sometimes defined as a compact n-dimensional Kähler manifold M satisfying one of the following equivalent conditions: These conditions imply that the first integral Chern class c1(M) of M vanishes, but the converse is not true. In particular if a compact Kähler manifold is simply connected then the weak definition above is equivalent to the stronger definition. G2 manifold

Libya's foreign minister flees to Britain - Africa Moussa Koussa, the Libyan foreign minister, has defected to the United Kingdom, the British foreign ministry has said. The ministry said in a statement that Koussa had arrived at Farnborough Airport, in the south of England, on a flight from Tunisia on Wednesday. "He travelled here under his own free will. He has told us that he is resigning his post. We are discussing this with him and we will release further details in due course," the statement said. "We encourage those around Gaddafi to abandon him and embrace a better future for Libya that allows political transition and real reform that meets the aspirations of the Libyan people." It added that Koussa was one of the most senior officials in Gaddafi's government with a role to represent it internationally, which is "something that he is no longer willing to do". Tunisia's TAP news agency said on Monday that Koussa had crossed over into Tunisia from Libya. "He is on a diplomatic mission," Mussa Ibrahim, the spokesman, said. Arms debate

ocean Permy? Open Source Ecology truthdig Humans must immediately implement a series of radical measures to halt carbon emissions or prepare for the collapse of entire ecosystems and the displacement, suffering and death of hundreds of millions of the globe’s inhabitants, according to a report commissioned by the World Bank. The continued failure to respond aggressively to climate change, the report warns, will mean that the planet will inevitably warm by at least 4 degrees Celsius (7.2 degrees Fahrenheit) by the end of the century, ushering in an apocalypse. The 84-page document,“Turn Down the Heat: Why a 4°C Warmer World Must Be Avoided,” was written for the World Bank by the Potsdam Institute for Climate Impact Research and Climate Analytics and published last week. The picture it paints of a world convulsed by rising temperatures is a mixture of mass chaos, systems collapse and medical suffering like that of the worst of the Black Plague, which in the 14th century killed 30 to 60 percent of Europe’s population.