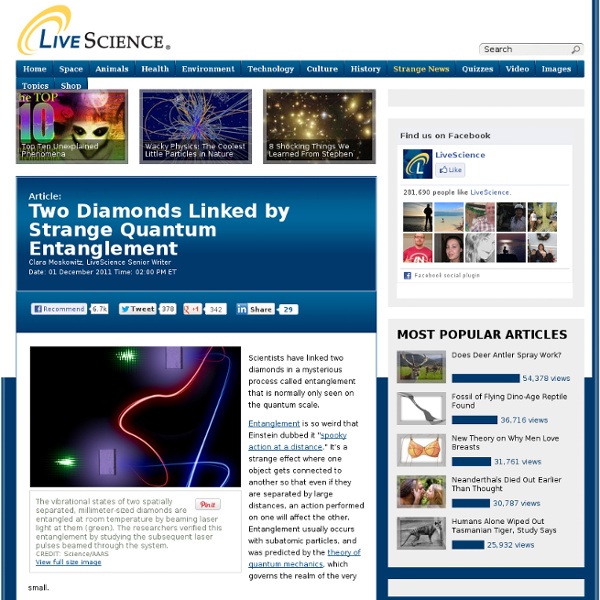 Scientists have linked two diamonds in a mysterious process called entanglement that is normally only seen on the quantum scale. Entanglement is so weird that Einstein dubbed it "spooky action at a distance." It's a strange effect where one object gets connected to another so that even if they are separated by large distances, an action performed on one will affect the other. Entanglement usually occurs with subatomic particles, and was predicted by the theory of quantum mechanics, which governs the realm of the very small. But now physicists have succeeded in entangling two macroscopic diamonds, demonstrating that quantum mechanical effects are not limited to the microscopic scale. "I think it's an important step into a new regime of thinking about quantum phenomena," physicist Ian Walmsley of England's University of Oxford said." Another study recently used quantum entanglement to teleport bits of light from one place to another.

Why there is no such thing as empty space MacGregor Campbell, contributor Could the universe have appeared out of nothing? In a previous video, we argued that typical notions of 'something' and 'nothing' don't really make sense according to modern physics. But many commenters objected to this idea, calling it a semantic game. In our latest animated explainer, we pick up where we left off and look at whether true nothingness is possible according to physics. You can find out more about the void in our full-length feature: Nothingness: The turbulent life of empty space. For more mind-bending physics, check out this explainer on how to build a time machine, or visit our archive of One-Minute Physics videos.

The mention of “spin” of a particle is one that... - Say It With Science Physics Community Afire With Rumors of Higgs Boson Discovery | Wired Science One of the biggest debuts in the science world could happen in a matter of weeks: The Higgs boson may finally, really have been discovered. Ever since tantalizing hints of the Higgs turned up in December at the Large Hadron Collider, scientists there have been busily analyzing the results of their energetic particle collisions to further refine their search. “The bottom line though is now clear: There’s something there which looks like a Higgs is supposed to look,” wrote mathematician Peter Woit on his blog, Not Even Wrong. According to Woit, there are rumors of new data that would be the most compelling evidence yet for the long-sought Higgs. The possible news has a number of physics bloggers speculating that LHC scientists will announce the discovery of the Higgs during the International Conference on High Energy Physics, which takes place in Melbourne, Australia, July 4 to 11. The new buzz is just the latest in the Higgs search drama.

How the universe appeared from nothing MacGregor Campbell, consultant There's no such thing as a free lunch, or so the saying goes, but that may not be true on the grandest, cosmic scale. Many physicists now believe that the universe arose out of nothingness during the Big Bang which means that nothing must have somehow turned into something. How could that be possible? Due to the weirdness of quantum mechanics, nothing transforms into something all the time. The less energy such a system has, the longer it can stick around. If you take inflation into account, which physicists think caused rapid expansion in the early universe, we begin to see why MIT physicist Alan Guth calls the universe the "ultimate free lunch." You can read the full story here or check out the rest of our Existence special. In our previous animated explainers, you can find out why free will is an illusion or how animals shaped the human mind.

Personal and Historical Perspectives of Hans Bethe Free particle Ultrafast Camera Records at Speed of Light Researchers at the Massachusetts Institute of Technology (M.I.T.) have developed an imaging system that can acquire visual data at a rate of one trillion exposures per second–fast enough to produce a slow-motion video of a burst of light traveling the length of a one-liter bottle, bouncing off the cap and reflecting back to the bottle’s bottom. As Ramesh Raskar, an associate professor in M.I.T.’s Media Lab, explains in the video below, a high-speed camera can capture the image of a bullet mid-flight. The M.I.T. camera can capture the movement of photons, which travel about one million times faster than bullets. The researchers use a titanium-sapphire laser as a pulsed light source and direct the beam using mirrors to a plastic bottle that helps illuminate the light. Their camera consists of an array of 500 sensors, each triggered at a trillionth-of-a-second delay, Media Lab postdoctoral associate Andreas Velten says in the video.