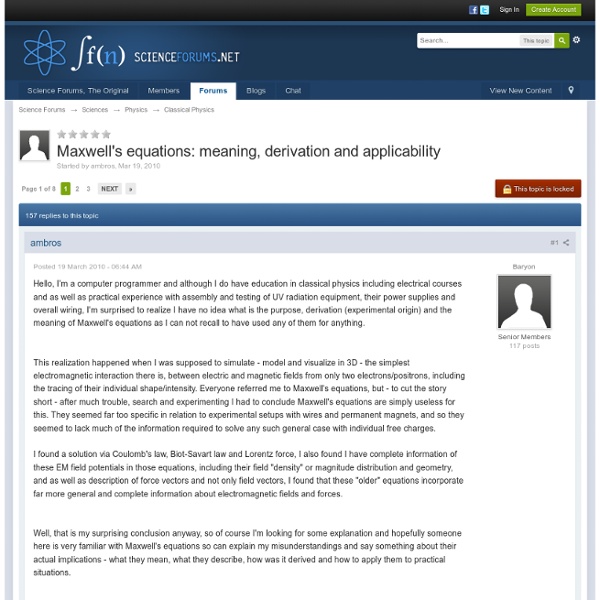 Quote So if Coulombs law works best for you, then use coulomb's law - there's no need to re-invent the wheel. As far as the original problem goes it is solved, but it uncovered great many things for me, so what is left now is curiosity because this solution implies Coulomb's and Biot-Savart law tell different and more complete story than Maxwell's equations and yet they are supposed to talk about the same E and B fields. There are two kinds of fields, "radial" like gravity and electric fields, and we have "rotational", like vortexes, whirlpools or magnetic fields. Uniform and constant "radial" field potentials have zero divergence and zero rotation (curl), it's a uniform magnitude distribution and inverse square law which defines topology and geometry of an electric field, not the other way around. This page here shows you how to get coulomb's law from maxwell's first equation: -- This page says: -"Gauss's law can be derived from Coulomb's law Related:  physics

The Second Law and Energy (second law event) 10/05/2007 1:00 PM Broad InstituteSteven Chu, Secretary of EnergyDescription: This Nobel Prize"winning scientist admits to staying up late the night before his talk to bone up on thermodynamics. He puts his research to good use, discussing the history and application of the laws of thermodynamics, which have served as "the scientific foundation of how we harness energy, and the basis of the industrial revolution, the wealth of nations." Taking Watt's 1765 steam engine, Stephen Chu illustrates basic principles of thermodynamics -- that energy is conserved, that you can do work from heat, especially when you maximize the difference in temperature in the system and minimize heat dissipation from friction. Chu offers another form of the laws: You can't win; you can't break even; and you can't leave the game. The game hasn't changed all that much in the past few centuries. credit MIT World -- special events and lectures license MIT TechTV

Physics World reveals its top 10 breakthroughs for 2011 The two physics stories that dominated the news in 2011 were questions rather than solid scientific results, namely "Do neutrinos travel faster than light?" and "Has the Higgs boson been found?". However, there have also been some fantastic bona fide research discoveries over the last 12 months, which made it difficult to decide on the Physics World 2011 Breakthrough of the Year. But after much debate among the Physics World editorial team, this year's honour goes to Aephraim Steinberg and colleagues from the University of Toronto in Canada for their experimental work on the fundamentals of quantum mechanics. Using an emerging technique called "weak measurement", the team is the first to track the average paths of single photons passing through a Young's double-slit experiment – something that Steinberg says physicists had been "brainwashed" into thinking is impossible. We have also awarded nine runners-up (see below). 1st place: Shifting the morals of quantum measurement

Quantum Diaries (Thoughts on work and life from particle physicists from around the world.) Gravitational lens A light source passes behind a gravitational lens (point mass placed in the center of the image). The aqua circle is the light source as it would be seen if there was no lens, white spots are the multiple images (or Einstein ring) of the source. A gravitational lens is a distribution of matter (such as a cluster of galaxies) between a distant light source and an observer, that is capable of bending the light from the source as the light travels towards the observer. This effect is known as gravitational lensing, and the amount of bending is one of the predictions of Albert Einstein's general theory of relativity.[1][2] (Classical physics also predicts the bending of light, but only half that predicted by general relativity.[3]) Although Einstein made unpublished calculations on the subject in 1912,[4] Orest Khvolson (1924)[5] and Frantisek Link (1936)[citation needed] are generally credited with being the first to discuss the effect in print. Description[edit] 1. 2. 3. History[edit] Notes

The Physical Origin of Universal Computing Imagine you’re shopping for a new car, and the salesperson says, “Did you know, this car doesn’t just drive on the road.” “Oh?” you reply. “Yeah, you can also use it to do other things. For instance, it folds up to make a pretty good bicycle. QuantizedA monthly column in which top researchers explore the process of discovery. You’d assume the salesperson was joking. Two characteristics of computers make this flexibility possible. These ideas of programmability and universality have become so embedded in our culture that they’re familiar even to many children. If you had a complete understanding of the machine, you’d understand all physical processes. To make his argument, Turing needed to show that his universal computer could perform any conceivable algorithmic process. In 1985, the physicist David Deutsch took another important step toward understanding the nature of algorithms. Deutsch’s principle goes well beyond Turing’s earlier informal arguments. Related Article:

Data Analysis, Statistics and Probability authors/titles recent submissions [ total of 8 entries: 1-8 ][ showing up to 25 entries per page: fewer | more ] 10 Strange Things About The Universe Space The universe can be a very strange place. While groundbreaking ideas such as quantum theory, relativity and even the Earth going around the Sun might be commonly accepted now, science still continues to show that the universe contains things you might find it difficult to believe, and even more difficult to get your head around. Theoretically, the lowest temperature that can be achieved is absolute zero, exactly ? One of the properties of a negative-energy vacuum is that light actually travels faster in it than it does in a normal vacuum, something that may one day allow people to travel faster than the speed of light in a kind of negative-energy vacuum bubble. One prediction of Einstein’s theory of general relativity is that when a large object moves, it drags the space-time around it, causing nearby objects to be pulled along as well. Relativity of Simultaneity Since this extra dimension is so small, only tiny objects, such as particles, can move along it. Antimatter Retrocausality

Usenet Physics FAQ Version Date: March 2013 This list of answers to frequently asked questions in physics was created by Scott Chase in 1992. Its purpose was to provide good answers to questions that had been discussed often in the sci.physics and related Internet news groups. The articles in this FAQ are based on those discussions and on information from good reference sources. They were later maintained and enlarged by Michael Weiss and Philip Gibbs. Most of the entries that you'll find here were written in the days when the Internet was brand new. So because of their age, the FAQ entries that you'll find here have a great deal of academic credibility—but they are not always perfect and complete. This document is copyright. General Physics Particle and Nuclear Physics Quantum Physics Relativity and Cosmology Speed of Light Special Relativity General Relativity and Cosmology Black Holes Reference Topics There are many other places where you may find answers to your question. Australia: England: Germany: India:

Dimensions Home A film for a wide audience! Nine chapters, two hours of maths, that take you gradually up to the fourth dimension. Mathematical vertigo guaranteed! Background information on every chapter: see "Details". Click on the image on the left to watch the trailer ! (turn your speakers on please). Free download and you can watch the films online! The film can also be ordered as a DVD. This film is being distributed under a Creative Commons license. Now with even more languages for the commentary and subtitles: Commentary in Arabic, English, French, German, Italian, Japanese, Spanish and Russian. Film produced by: Jos Leys (Graphics and animations) Étienne Ghys (Scenario and mathematics) Aurélien Alvarez (Realisation and post-production)