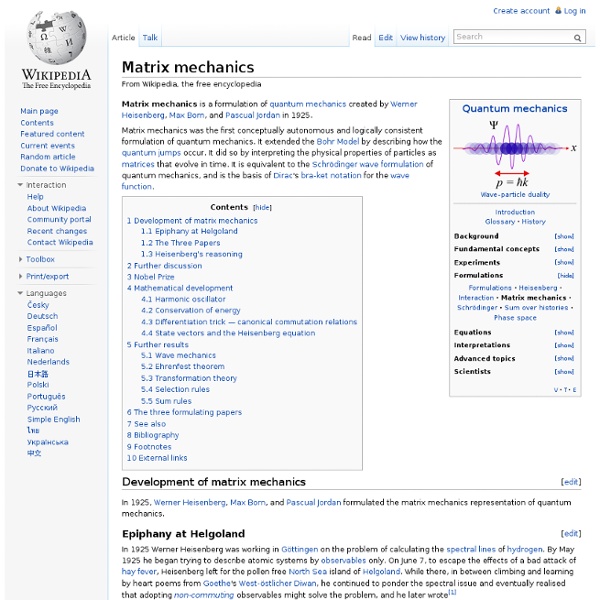 Matrix mechanics is a formulation of quantum mechanics created by Werner Heisenberg, Max Born, and Pascual Jordan in 1925. In some contrast to the wave formulation, it produces spectra of energy operators by purely algebraic, ladder operator, methods.[1] Relying on these methods, Pauli derived the hydrogen atom spectrum in 1926,[2] before the development of wave mechanics. Development of matrix mechanics[edit] In 1925, Werner Heisenberg, Max Born, and Pascual Jordan formulated the matrix mechanics representation of quantum mechanics. Epiphany at Helgoland[edit] In 1925 Werner Heisenberg was working in Göttingen on the problem of calculating the spectral lines of hydrogen. "It was about three o' clock at night when the final result of the calculation lay before me. The Three Fundamental Papers[edit] After Heisenberg returned to Göttingen, he showed Wolfgang Pauli his calculations, commenting at one point:[4] In the paper, Heisenberg formulated quantum theory without sharp electron orbits. W.

Free particle Applications Solution of Schrödinger equation for a step potential In quantum mechanics and scattering theory, the one-dimensional step potential is an idealized system used to model incident, reflected and transmitted matter waves. The problem consists of solving the time-independent Schrödinger equation for a particle with a step-like potential in one dimension. Typically, the potential is modelled as a Heaviside step function. Calculation[edit] Schrödinger equation and potential function[edit] Scattering at a finite potential step of height V0, shown in green. The time-independent Schrödinger equation for the wave function is The barrier is positioned at x = 0, though any position x0 may be chosen without changing the results, simply by shifting position of the step by −x0. The first term in the Hamiltonian, is the kinetic energy of the particle. Solution[edit] The step divides space in two parts: x < 0 and x > 0. both of which have the same form as the De Broglie relation (in one dimension) Boundary conditions[edit] Transmission and reflection[edit]

Particle in a box In quantum mechanics, the particle in a box model (also known as the infinite potential well or the infinite square well) describes a particle free to move in a small space surrounded by impenetrable barriers. The model is mainly used as a hypothetical example to illustrate the differences between classical and quantum systems. In classical systems, for example a ball trapped inside a large box, the particle can move at any speed within the box and it is no more likely to be found at one position than another. However, when the well becomes very narrow (on the scale of a few nanometers), quantum effects become important. The particle may only occupy certain positive energy levels. The particle in a box model provides one of the very few problems in quantum mechanics which can be solved analytically, without approximations. One-dimensional solution[edit] The simplest form of the particle in a box model considers a one-dimensional system. where is the length of the box and is time. and . . .

Quantum Physics Revealed As Non-Mysterious This is one of several shortened indices into the Quantum Physics Sequence. Hello! You may have been directed to this page because you said something along the lines of "Quantum physics shows that reality doesn't exist apart from our observation of it," or "Science has disproved the idea of an objective reality," or even just "Quantum physics is one of the great mysteries of modern science; no one understands how it works." There was a time, roughly the first half-century after quantum physics was invented, when this was more or less true. Certainly, when quantum physics was just being discovered, scientists were very confused indeed! The series of posts indexed below will show you - not just tell you - what's really going on down there. Some optional preliminaries you might want to read: Reductionism: We build models of the universe that have many different levels of description. And here's the main sequence:

Quantum harmonic oscillator Some trajectories of a harmonic oscillator according to Newton's laws of classical mechanics (A-B), and according to the Schrödinger equation of quantum mechanics (C-H). In A-B, the particle (represented as a ball attached to a spring) oscillates back and forth. In C-H, some solutions to the Schrödinger Equation are shown, where the horizontal axis is position, and the vertical axis is the real part (blue) or imaginary part (red) of the wavefunction. C,D,E,F, but not G,H, are energy eigenstates. H is a coherent state, a quantum state which approximates the classical trajectory. The quantum harmonic oscillator is the quantum-mechanical analog of the classical harmonic oscillator. One-dimensional harmonic oscillator[edit] Hamiltonian and energy eigenstates[edit] Wavefunction representations for the first eight bound eigenstates, n = 0 to 7. Corresponding probability densities. where m is the particle's mass, ω is the angular frequency of the oscillator, is the position operator, and and Proof: