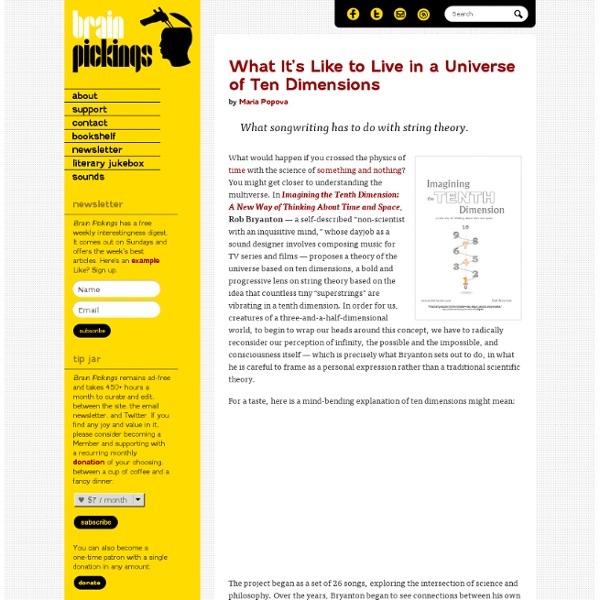 by Maria Popova What songwriting has to do with string theory. What would happen if you crossed the physics of time with the science of something and nothing? You might get closer to understanding the multiverse. In Imagining the Tenth Dimension: A New Way of Thinking About Time and Space, Rob Bryanton — a self-described “non-scientist with an inquisitive mind,” whose dayjob as a sound designer involves composing music for TV series and films — proposes a theory of the universe based on ten dimensions, a bold and progressive lens on string theory based on the idea that countless tiny “superstrings” are vibrating in a tenth dimension. For a taste, here is a mind-bending explanation of ten dimensions might mean: The project began as a set of 26 songs, exploring the intersection of science and philosophy. Before launching into the additional dimensions, Bryanton also breaks down the familiar three: HT It’s Okay To Be Smart Donating = Loving Brain Pickings has a free weekly newsletter.

We Are a Cosmic Accident: Alan Lightman on Dark Energy, the Multiverse, and Why We Exist by Maria Popova How we drew the one we have from the zillions of possible universes in the cosmic lottery hat. Questions like why our world exists and what nothing is have occupied minds great and ordinary since the dawn of humanity, and yet for all our scientific progress, they continue to do so, yielding only hypotheses rather than concrete answers. But there is something immutably heartening in the difference between the primitive hypotheses of myth, folklore and religion, which handed off such mysteries to various deities and the occasional white-bearded man, and the increasingly educated guesses of modern science. The most compelling example of fine-tuning is dark energy — an invisible and unexpected cosmological force that hides in empty space and works against the universe’s slowing expansion, a sort of “cosmic accelerator pedal” that is speeding up its expansion and causing galaxies to drift away from one another. On one thing most physicists agree. Donating = Loving

The Pay Ethic We hear a lot about the work ethic, the notion that hard work is inherently virtuous. We don’t hear nearly so much about its dual, the Pay Ethic. The Pay Ethic is the idea that paying generously is a virtue. The two ethics really are dual of each other. When the two ethics fall out of balance, civilization is compromised. Libertarians and free-market advocates might call this heretical: Capitalism, they will claim, is built on greed, founded on squeezing every ounce of profit from people like cattle. The truth is this: if a business is in such straits that it can only survive by cutting corners from the payroll, then that business is not a productive asset. The Pay Ethic doesn’t just apply to employers or people who patronize art. Or if you prefer, have it the other way. Why the U.S. should implement Basic IncomeLegitimacyDictators: How to Immunize Yourselves against Revolution

Rife Cancer Cure The Rife Microscope Cancer Cure Story Strange Beliefs: Cancer Cure Created 12/28/2001 - Updated 11/20/2007 a super microscope | seeing live viruses | glowing viruses | viruses cause cancer shattering germs with radio waves | cancer cure? | suppression or quackery | frequencies and how to get them | references The Reasonable Persons Guide to Strange Ideas next examines one of the most astounding claims on the net. Overview of Claims Some claim that Dr. The Rife Microscopes No one doubts that Royal Raymond Rife was a real individual who did indeed create several unique microscopes. One microscope expert reading this article wrote that Baush and Lomb offered Rife "a ton of money" in the late 1930's but B and L ran because the microscope was a fraud. Goal of This Article This author hopes to entice you to think, to learn and to explore science.

GMin's Innovation Labs: Enabling Generations of Young Innovators | GLOBAL MINIMUM It will take anywhere from 3 seconds to 1 minute for your pic to upload, depending on how big it is. You're going to see this message every time you post a new pic. So, we're making the text really long so that it'll take you at least five picture uploads to read it all. Here's what we're thinking...While your first picture is uploading think about someone you want to kiss. What Would It Take to Kill Hollywood? And Should We Try? By Alyssa Rosenberg on January 25, 2012 at 9:52 am "What Would It Take To Kill Hollywood? And Should We Try?" Paul Graham, the founder of start-up seeder Y Combinator has decided that the fight over SOPA and PIPA proves that Hollywood is a dying industry, and has issued calls for competitors to kill it: That’s one reason we want to fund startups that will compete with movies and TV, but not the main reason. That’s a big task, and one that comes with formidable obstacles. Second, and relatedly, knowing how to distribute content isn’t the same thing as knowing how to produce it, or to spot what’s good about a project, or to know how to make it work. Third, I don’t know that there’s good evidence that there will be a direct tradeoff between movie spending and other forms of entertaining.

The Library of Halexandriah Japanese Students Create Brilliant Straw Home Heated by Compost Japanese students at Waseda University have designed and built an innovative straw house that produces its own heat through agricultural fermentation. During the cold months, dried straw is composted in acrylic cases within the house using the low-odor Japanese “bokashi” method. The fermentation naturally heats up the house by generating 30° celsius heat for up to four weeks. The project, called “A Recipe To Live,” stands in the coastal town of Taiki-cho in Hokkaido. During the hot summer months, the natural shelter dries straw inside transparent window shelves. Photos by LIXIL

iPhone 5 details leaked by Foxconn employee? Another day, another iPhone 5 rumor. This time it’s supposedly from a Foxconn employee, claims 9to5mac. The website reported that the iPhone 5 is currently “geared for production”, with sample devices floating around. The sample devices reportedly feature a 4+ inch display (made by LG on at least one of them), will not have a teardrop-shaped body, have been longer/wider than the existing iPhone, and won’t have the same iPhone 4/4S form factor. It was also mentioned that none of the samples are final versions either. There is no guarantee that the final iPhone 5 will feature any of the aforementioned details and again, there’s no way to tell if the reports are true either. .

Dear Blue Lobster State Of The Union Address Highlights The Dirty Trick Of Hiding More Draconian IP Rules In 'Trade Agreements' As we've been discussing, it's great that the anti-SOPA/PIPA protests have awakened many to the horrors of ACTA. It seems that this may also help people finally learn about the nefarious practice of industry trade groups and governments to sneak bad IP legislation through "international agreements." With President Obama mentioning the importance of trade agreements and dealing with infringement in his State of the Union address, many people were wondering if it was a signal about SOPA/PIPA. However, as Harold Feld explains, it's much more likely he's talking about these new international agreements and treaties, like ACTA and (the even worse) TPP agreement that's currently being negotiated (in secrecy, of course). But, as Feld points out, the efforts behind SOPA and PIPA show that the same entertainment industry who insisted that the trade agreement with Korea was so perfect, is now whining that the agreement is "too weak."

Scientists Discover a Jewel at the Heart of Quantum Physics - Wired Science Physicists reported this week the discovery of a jewel-like geometric object that dramatically simplifies calculations of particle interactions and challenges the notion that space and time are fundamental components of reality. “This is completely new and very much simpler than anything that has been done before,” said Andrew Hodges, a mathematical physicist at Oxford University who has been following the work. The revelation that particle interactions, the most basic events in nature, may be consequences of geometry significantly advances a decades-long effort to reformulate quantum field theory, the body of laws describing elementary particles and their interactions. Interactions that were previously calculated with mathematical formulas thousands of terms long can now be described by computing the volume of the corresponding jewel-like “amplituhedron,” which yields an equivalent one-term expression. The amplituhedron itself does not describe gravity.

The 5 Stupidest Habits You Develop Growing Up Poor As some of you know, until the last couple of years, I was poor as shit. The first 18 years, I was a kid and couldn't do anything about it. The next 17, I was still a kid and wouldn't do anything about it. But along the way, a few miracles happened (including landing a job that doesn't suck), and I've finally found myself living the way I always pictured a normal person would: bills paid, groceries in the fridge and two gold-plated nude statues of myself standing proudly in my front yard. But as anybody who's been through the poverty gauntlet can tell you, it changes a person. #5. When You're Poor ... Shockingly, when you're buying food based entirely on 1) how long it keeps and 2) how cheap it is, you wind up with shitty food. Photos.comLike assloads of beer. Forget about fresh produce or fresh baked goods or fresh anything. If it wasn't canned, it was frozen. Once You Escape ... To this day, my kids won't eat fresh green beans. Photos.com"Awesome, seafood night! myfitnesspal.com #4. #3.