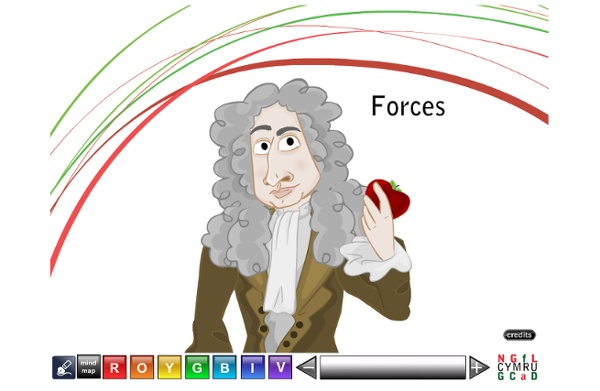 Nuclear reactor and power plant simulation Introduction This is not a lesson like the others in Radioactivity and Atomic Physics Explained but it fits in well with the lesson on nuclear power. It is a very sophisticated simulation of a pressurised water reactor (PWR), which is the most common type of nuclear power reactor in the US but not in Europe, though the principles are very similar. Using the tour There is a comprehensive tour which goes through the workings of the reactor, starting from a consumer of electrical energy and working backwards to the reactor core itself. You can restart the tour at any time using the button at the top left of the screen.

OSP Simulations Overview » home » Simulations » Overview Overview Search for OSP Simulations or browse by topic Applications There are three ways to distribute and run Java programs. Java Applications Java Web Start Java Applets Learn The History Of Physics In 4 Minutes Aristotle was wrong. He claimed that heavier items fell faster than lighter items. Had he actually tested the theory, using a high-tech tool as sophisticated as a ladder, a ledge, or a cliff, he’d have immediately realized that it couldn’t possibly be true. Because Galileo did test the theory, and he found that balls of various mass fell at the exact same rate. And then he skydived off the Leaning Tower of Pisa in celebration just to rub it in Aristotle’s wrong dead face.

Applets Applets Light Reflection Plane Mirror Image Creating an Image with Plane Mirror The Physics Classroom Transformers In the photograph, note that the coil on the left has fewer coils than that at right (the insets show close-ups). The sketch and circuit show a step-up transformer. To make a step-down transformer, one only has to put the source on the right and the load on the left. (Important safety note: for a real transformer, you could only 'plug it in backwards' only after verifying that the voltage rating were appropriate.) Interactive 3D model of Solar System Planets and Night Sky Circuit Simulator Applet This is an electronic circuit simulator. When the applet starts up you will see an animated schematic of a simple LRC circuit. The green color indicates positive voltage. The gray color indicates ground. A red color indicates negative voltage.

Electricity and Magnetism - Interactive J Atomic Orbitals Surrounding the nucleus of an atom are various energy "shells" composed of electron distribution probabilities known as atomic orbitals. These orbitals represent the density distribution of electrons that float around the atom, and are filled with new electrons as the atom increases in size. This tutorial examines the first four energy levels of an atom, s, p, d, and f, chosen through the pull-down menu.