Prototype. [ edit ] English Wikipedia [ edit ] Pronunciation [ edit ] Noun prototype ( plural prototypes ) An original object or form which is a basis for other objects, forms, or for its models and generalizations An early sample or model built to test a concept or process The prototype had loose wires and rough edges, but it worked. ( semantics ) An instance of a category or a concept that combines its most representative attributes. 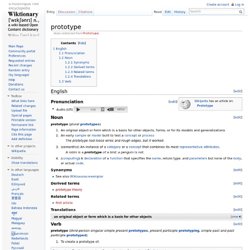 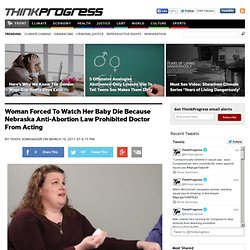 Attack Of The Funny Animals (22 Pics. Auscomp.com. Other sources of quality software. Since 1987, the ASP has been dedicated to the advancement of shareware, also known as try-before-you-buy software, as an alternative to conventional retail marketing of software. 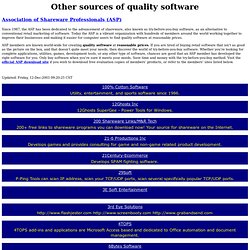 Today the ASP is a vibrant organization with hundreds of members around the world working together to improve their businesses and making it easier for computer users to find quality software at reasonable prices. ASP members are known world-wide for creating quality software at reasonable prices. If you are tired of buying retail software that isn't as good as the picture on the box, and that doesn't quite meet your needs, then discover the world of try-before-you-buy software. Whether you're looking for complete applications, utilities, games, development tools, or any other type of software, chances are good that an ASP member has developed the right software for you. 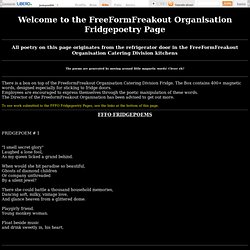 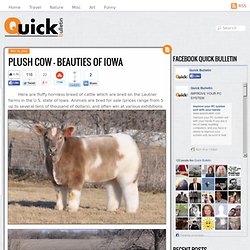 Animals are bred for sale (prices range from 5 up to several tens of thousand of dollars), and often win at various exhibitions. Share and Enjoy. Generate a Random Name - Fake Name Generator. Lapedo child. The Lapedo child, also known as Lagar Velho 1, is a complete prehistorical skeleton found in Portugal. 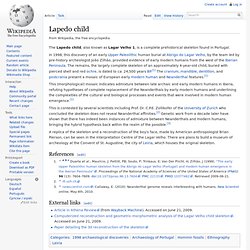 In 1998, this discovery of an early Upper Paleolithic human burial at Abrigo do Lagar Velho, by the team led by pre-history archeologist João Zilhão, provided evidence of early modern humans from the west of the Iberian Peninsula. The remains, the largely complete skeleton of an approximately 4-year-old child, buried with pierced shell and red ochre, is dated to ca. 24,500 years BP.[1] The cranium, mandible, dentition, and postcrania present a mosaic of European early modern human and Neanderthal features.[1] This (morphological) mosaic indicates admixture between late archaic and early modern humans in Iberia, refuting hypotheses of complete replacement of the Neanderthals by early modern humans and underlining the complexities of the cultural and biological processes and events that were involved in modern human emergence.[1] This is contested by several scientists including Prof.

Dr. Incredible Vertigo-Inducing Animations of San Francisco. This post contains a number of extremely large animated GIFs which might taken a moment to fully download. Sorry for any inconvenience. Director Kevin Parry (previously) recently directed a wonderful music video for Kalle Matson, shot by Andrea Nesbitt, featuring a number of visual special effects that appear to slingshot the camera through wide views of San Francisco. Parry has a full gallery of smaller animations where you can see some of the isolated shots, but I had him export seven large, absolutely bandwidth-sucking versions, five of which are above. For two more, see also Ocean Bay Bridge and Market Street.

Regarding how this was all accomplished he says via email: Inside the Paris Brothels of the Belle Époque. Behind the number 12, rue Chabanais, a typical building on a typical back street not far from the Musée du Louvre in Paris, used to be one of the most notorious and prestigious bordellos of the golden era. 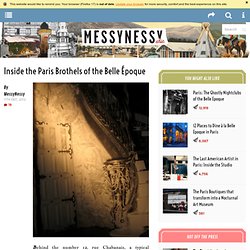 Today, it’s an apartment building, but just across the road at number 11, an inconspicuous little boutique gallery is keeping the sordid secrets of its lustful past alive. World’s apart from Paris’ vast official art galleries and museums, Au Bonheur du Jour is run by a fifty-something former cabaret dancer, Nicole Canet, who refers to herself as an ‘archeologist of erotica’ … [that's not her in the photograph above]. The entrance hall was designed as a bare stone cave; the bedrooms were lavishly decorated, many in their own style: Moorish, Hindu, Japanese, Pompeii or in the style of Louis XVI. Her unusual intimate gallery sits facing the old site of Le Chabanais, one of the most luxurious ‘maisons closes’ that Paris had ever seen during its heyday of authorized brothels. Hotel Matigny. Watch the amazing footage of the destruction wreaked by this rockfall. Drone captures dramatic effects of rockfall in Northern Italy4,000 cubic metres of rock crash into 300-year-old building Published: 06:22 GMT, 29 January 2014 | Updated: 12:08 GMT, 29 January 2014 Amazing drone footage has captured the trail of destruction left by a rockfall in northern Italy. 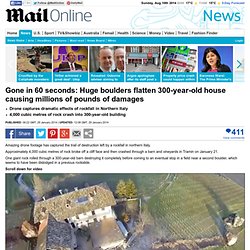 Approximately 4,000 cubic metres of rock broke off a cliff face and then crashed through a barn and vineyards in Tramin on January 21. One giant rock rolled through a 300-year-old barn destroying it completely before coming to an eventual stop in a field near a second boulder, which seems to have been dislodged in a previous rockslide. The Only Pair of Matching Singing Bird Pistols, Attributed to Frères Rochat. Sinead O’Connor’s Remarkable Open Letter To Miley Cyrus. What's the Coolest, Weirdest or Most Overlooked Monument in Your City?

Weird Houses. Living in a box doesn't look so strange after this... You shouldn't run or jump through this house. Especially if you don't swim. Ecards for when you care enough to hit send. Republic of Molossia. Molossia, officially the Republic of Molossia, is a micronation, founded by Kevin Baugh, humorously as a "dictatorial banana-republic" and headquartered solely from a tiny home near Dayton, Nevada. 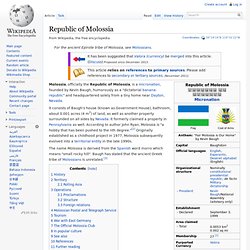 It consists of Baugh's house (known as Government House), bathroom, about 0.001 acres (4 m2) of land, as well as another property surrounded on all sides by Nevada. It formerly claimed a property in Pennsylvania as well. 1942 ‘Time Capsule’ Apartment Discovered In Paris – BELLO. This real-estate story sounds almost like a fairy tale or the beginning of a big Hollywood production. 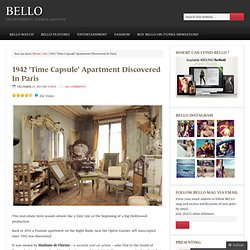 Back in 2010 a Parisian apartment on the Right Bank, near the Opéra Garnier, left unoccupied since 1942 was discovered. It was owned by Madame de Florian – a socialite and an actress – who fled to the South of France during the second world war, leaving everything behind. She never came back to Paris but kept on paying her rent until the day she died when she was 91. It’s only after she died that someone – a Commissaire Priseur – Auctioneer – re-enter her apartment for the first time in over 70 years. Ron de Jeremy Blended Rum (750ml) Personal and Historical Perspectives of Hans Bethe. Time Clock Manager, Cheap Car Insurance Quote, Key Mouse, Macro Software,BarCode Software. Pilot - Social Media Optimization (SMO) Origami star folding. Рамблер ТОП100 / Фотография. Welcome To The Museum of Erectile Dysfunction. BigHugeLabs: Do fun stuff with your photos.

Endless Interestingness. Site Redirect. People from nearly every country share information with CIA, and new individuals contact us daily. If you have information you think might interest CIA due to our foreign intelligence collection mission, there are many ways to reach us. If you know of an imminent threat to a location inside the U.S., immediately contact your local law enforcement or FBI Field Office. For threats outside the U.S., contact CIA or go to a U.S. Embassy or Consulate and ask for the information to be passed to a U.S. official. 20 Gifs That Explain How Things Work. Sometimes you just need an image to help you understand something. And if that image is in motion and shows you something that you otherwise would never see, all the better.

Below is a set of animated gifs that show us how certain things work. What happens when we swallow. Sexy Codicology - A World of Illuminated Manuscripts and Medieval Books. Steampunk (Wallpaper of the Week) Exploratree - Exploratree by FutureLab. Serenity-plan-1200.jpg (JPEG Image, 1400 × 577 pixels) - Scaled (73%) What is the CounterOrder? What is this Internet site? This site is the home of the CounterOrder, a website and communications network for Nihilists that was started in 1998 by Freydis (then called Nihilism’s Home Page).