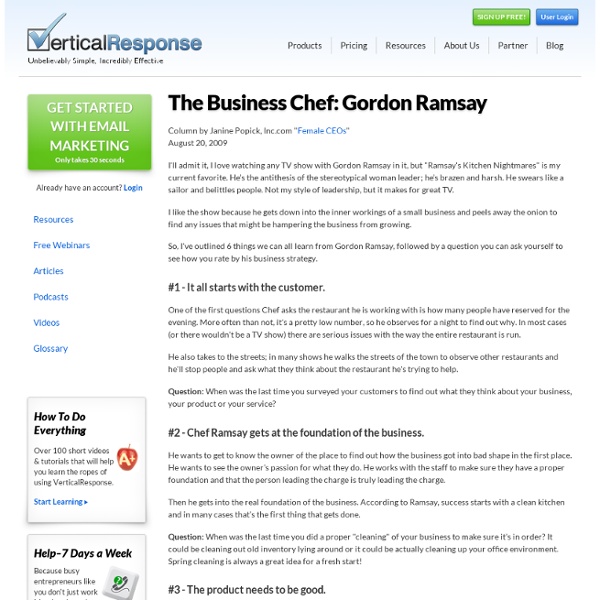 Column by Janine Popick, Inc.com "Female CEOs" August 20, 2009 I'll admit it, I love watching any TV show with Gordon Ramsay in it, but "Ramsay's Kitchen Nightmares" is my current favorite. He’s the antithesis of the stereotypical woman leader; he’s brazen and harsh. He swears like a sailor and belittles people. Not my style of leadership, but it makes for great TV. I like the show because he gets down into the inner workings of a small business and peels away the onion to find any issues that might be hampering the business from growing. So, I've outlined 6 things we can all learn from Gordon Ramsay, followed by a question you can ask yourself to see how you rate by his business strategy. #1 - It all starts with the customer. One of the first questions Chef asks the restaurant he is working with is how many people have reserved for the evening. Question: When was the last time you surveyed your customers to find out what they think about your business, your product or your service?

6 Ways to Increase Your Chances of an IRS Tax Audit The deadline for filing your income tax return is rapidly approaching. Filers are often tempted to fudge the facts on their tax returns in an effort to get a bigger refund. But that tactic can backfire on you, resulting in an Internal Revenue Service Audit. 45 Kick-Ass Resources for Online Entrepreneurs Few people talk about this great productivity tip… You will reach your goals faster and easier if you’re willing to learn from others. Using brilliant, well-crafted resources created specifically for online entrepreneurs improves your online productivity. Below I have a long list of resources, most of which I’ve used myself.

A Hacker's Guide to Monetizing Free-to-Play Games - Betable The Free-to-play Revolution Free-to-play games are growing in popularity and quickly taking over the Top Grossing app spots on both the App Store and the Android Market. It makes a lot of sense, especially for social games that need to achieve critical mass for the best gameplay experience. The user adoption rate of a free product is 5 to 6 times higher than a product that costs even $0.01, and that viral spread is a great way to get users to refer you to the customer that will make that free-to-paid conversion later. This option also drives strong category rankings because it drives more installs, which makes it especially valuable now that Apple has prohibited incentivized installs to a certain extent.

SOPA Emergency IP list: So if these bastards in DC decide to ruin the internet, here’s how to access your favorite sites in the event of a DNS takedown tumblr.com 174.121.194.34 wikipedia.org 208.80.152.201 # News bbc.co.uk 212.58.241.131 aljazeera.com 198.78.201.252 How to Improve Motivation: 11 steps (with pictures) Edit Article Edited by Www.best free workout plans.com, 1920slover, wikiHow Coach, The Guy Who Hates Hating and 14 others Did you ever wonder how people achieve their goals? How do you buy organs on the black market? Those were brilliant stories. One interesting wrinkle was that as more and more organs were demanded, the death sentence become pervasive even for lesser crimes. Run three red lights: Death sentence carried out in a hospital. Those were some very interesting stories - I loved the one where the guy escaped (I think another prisoner had a bomb implanted in his thigh-bone or something), and managed to get to the roof. And the societal transition from organ-legging to artificial organs was one way that Brennan was found by the goldskin (belter) cop and Brennan's great-nephew; he had switched the recipients of donations from artificial organs to something else as organlegging went away.... The guy in the story where he escaped (which it sounds like you read) was just guilty of some traffic violations, iirc.

What is an Operating System?" Not all computers have operating systems. The computer that controls the microwave oven in your kitchen, for example, doesn't need an operating system. It has one set of tasks to perform, very straightforward input to expect (a numbered keypad and a few pre-set buttons) and simple, never-changing hardware to control. 10 Killer Apps for the Coworking Professional This post originally appeared on the American Express OPEN Forum, where Mashable regularly contributes articles about leveraging social media and technology in small business. Imaginative freelancers and open-minded collaborators come together each day to bounce ideas and innovate in coworking spaces. These shared offices rent desks to solo workers and tiny companies.

Dokkōdō The "Dokkōdō" [ (Japanese: 独行道?); "The Path of Aloneness", "The Way to Go Forth Alone", or "The Way of Walking Alone"] is a short work written by Miyamoto Musashi (宮本 武蔵) a week before he died in 1645. It consists of either nineteen or twenty-one precepts; precepts 4 and 20 are omitted from the former version. "Dokkodo" was largely composed on the occasion of Musashi giving away his possessions in preparation for death, and was dedicated to his favorite disciple, Terao Magonojō (to whom the earlier Go rin no sho [The Book of Five Rings] had also been dedicated), who took them to heart.

6 Free Useful Resume Online Tools to Help You Stand Out From the Crowd Beside to use the traditional way to apply job and submit resume and cover letter. Now job seekers get another option, create a modern resume online, with more creative and interactive. Thanks for the Internet and Web2.0 era. ResumePark Bigpoint's big numbers With a quarter of a million registrations a day and 220 million accounts on its books, free-to-play specialist Bigpoint loves numbers. Its many games, which include Battlestar Galactica Online, Drakensang Online and Farmerama, may be free, but with a philosophy that says "you can be as creative as you want to, but base it on numbers," the German publisher is becoming one of the richest players in the online marketplace. We met Philip Reisberger, its chief games officer, to discuss the importance of creatives understanding financial realities, a Darwinian approach to game design, why EA doesn't understand monetisation and why Team Fortress 2 shouldn't have gone free-to-play.

100 Websites You Should Know and Use Entertainment Meet David Peterson, who developed Dothraki for Game of Thrones There are seven different words in Dothraki for striking another person with a sword. 46 Ways To Start A Business With No Money Most people who want to start their own business don’t have a ton of money laying around and it’s probably one the most common questions I get emailed about: How can I get started without a lot of cash? Well I’ve put together a list below of the best ideas I’ve heard and personally used. I hope you find it useful!