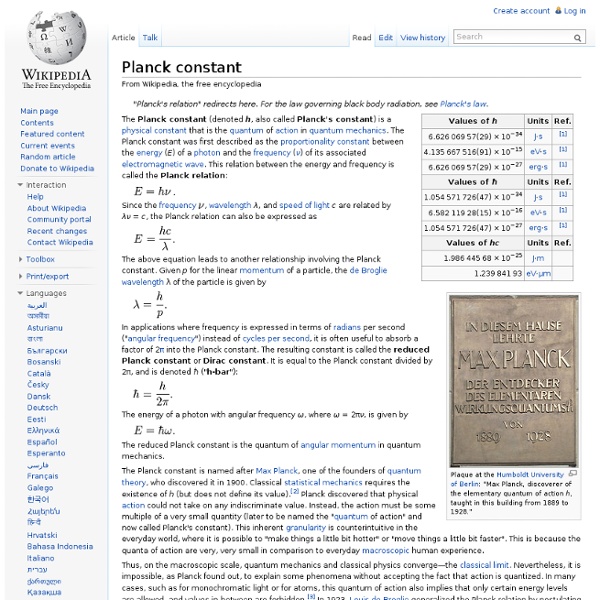 Plaque at the Humboldt University of Berlin: "Max Planck, discoverer of the elementary quantum of action h, taught in this building from 1889 to 1928." In 1905 the value (E), the energy of a charged atomic oscillator, was theoretically associated with the energy of the electromagnetic wave itself, representing the minimum amount of energy required to form an electromagnetic field (a "quantum"). Further investigation of quanta revealed behaviour associated with an independent unit ("particle") as opposed to an electromagnetic wave and was eventually given the term photon. Since the frequency , wavelength λ, and speed of light c are related by λν = c, the Planck relation for a photon can also be expressed as The above equation leads to another relationship involving the Planck constant. In applications where frequency is expressed in terms of radians per second ("angular frequency") instead of cycles per second, it is often useful to absorb a factor of 2π into the Planck constant.

Quantum spacetime In mathematical physics, the concept of quantum spacetime is a generalization of the usual concept of spacetime in which some variables that ordinarily commute are assumed not to commute and form a different Lie algebra. The choice of that algebra still varies from theory to theory. As a result of this change some variables that are usually continuous may become discrete. Often only such discrete variables are called "quantized"; usage varies. Physical reasons have been given to believe that physical spacetime is a quantum spacetime. are already noncommutative, obey the Heisenberg uncertainty principle, and are continuous. Again, physical spacetime is expected to be quantum because physical coordinates are already slightly noncommutative. Both arguments are based on pure gravity and quantum theory, and they limit the measurement of time by the only time constant in pure quantum gravity, the Planck time. The Lie algebra should be semisimple (Yang, I. Bicrossproduct model spacetime[edit]

Uncertainty reigns over Heisenberg's measurement analogy A row has broken out among physicists over an analogy used by Werner Heisenberg in 1927 to make sense of his famous uncertainty principle. The analogy was largely forgotten as quantum theory became more sophisticated but has enjoyed a revival over the past decade. While several recent experiments suggest that the analogy is flawed, a team of physicists in the UK, Finland and Germany is now arguing that these experiments are not faithful to Heisenberg's original formulation. Heisenberg's uncertainty principle states that we cannot measure certain pairs of variables for a quantum object – position and momentum, say – both with arbitrary accuracy. When Heisenberg proposed the principle in 1927, he offered a simple physical picture to help it make intuitive sense. Not necessarily wrong Then in 1988 Masanao Ozawa at Nagoya University in Japan argued that Heisenberg's original relationship between error and disturbance does not represent a fundamental limit of uncertainty. Truer to Heisenberg?

Zero-point energy Zero-point energy, also called quantum vacuum zero-point energy, is the lowest possible energy that a quantum mechanical physical system may have; it is the energy of its ground state. All quantum mechanical systems undergo fluctuations even in their ground state and have an associated zero-point energy, a consequence of their wave-like nature. The uncertainty principle requires every physical system to have a zero-point energy greater than the minimum of its classical potential well. This results in motion even at absolute zero. For example, liquid helium does not freeze under atmospheric pressure at any temperature because of its zero-point energy. History[edit] In 1900, Max Planck derived the formula for the energy of a single energy radiator, e.g., a vibrating atomic unit:[5] where is Planck's constant, is the frequency, k is Boltzmann's constant, and T is the absolute temperature. According to this expression, an atomic system at absolute zero retains an energy of ½hν. Varieties[edit] .

Boltzmann constant The Boltzmann constant (kB or k), named after Ludwig Boltzmann, is a physical constant relating energy at the individual particle level with temperature. It is the gas constant R divided by the Avogadro constant NA: It has the same dimension (energy divided by temperature) as entropy. The accepted value in SI units is 1.3806488(13)×10−23 J/K. Bridge from macroscopic to microscopic physics[edit] where R is the gas constant (8.314 4621(75) J K−1 mol−1[1]). The left-hand side of the equation is a macroscopic amount of pressure-volume energy representing the state of the bulk gas. Role in the equipartition of energy[edit] Given a thermodynamic system at an absolute temperature T, the thermal energy carried by each microscopic "degree of freedom" in the system is on the order of magnitude of kBT/2 (i. e., about 2.07×10−21 J, or 0.013 eV, at room temperature). Application to simple gas thermodynamics[edit] Kinetic theory gives the average pressure p for an ideal gas as gives History[edit]

Magnus effect The Magnus effect, depicted with a back-spinning cylinder or ball in an air stream. The arrow represents the resulting lifting force. The curly flow lines represent a turbulent wake. The airflow has been deflected in the direction of spin. The Magnus effect is the commonly observed effect in which a spinning ball (or cylinder) curves away from its principal flight path. In terms of ball games, top spin is defined as spin about a horizontal axis perpendicular to the direction of travel, where the top surface of the ball is moving forward with the spin. It is named for Gustav Magnus, the German physicist who investigated it. Physics[edit] A valid intuitive understanding of the phenomenon is possible, beginning with the fact that, by conservation of momentum, the deflective force on the body is no more or less than a reaction to the deflection that the body imposes on the air-flow. In fact there are several ways in which the rotation might cause such a deflection. History[edit] Watts, R.

Efimov state The Efimov effect is an effect in the quantum mechanics of Few-body systems predicted by the Russian theoretical physicist V. N. Efimov[1][2] in 1970. Efimov’s effect refers to a scenario in which three identical bosons interact, with the prediction of an infinite series of excited three-body energy levels when a two-body state is exactly at the dissociation threshold. The unusual Efimov state has an infinite number of similar states. In 2005, for the first time the research group of Rudolf Grimm and Hanns-Christoph Nägerl from the Institute for Experimental Physics (University of Innsbruck, Austria) experimentally confirmed such a state in an ultracold gas of caesium atoms. The interest in the "universal phenomena" of cold atomic gases is still growing, especially because of the long awaited experimental results.[8][9] The discipline of universality in cold atomic gases nearby the Efimov states are sometimes commonly referred to as "Efimov physics". References[edit] Jump up ^ В.И.

Planck units Originally proposed in 1899 by German physicist Max Planck, these units are also known as natural units because the origin of their definition comes only from properties of the fundamental physical theories and not from interchangeable experimental parameters. Planck units are only one system of natural units among other systems, but are considered unique in that these units are not based on properties of any prototype object or particle (that would be arbitrarily chosen), but rather on properties of free space alone. The universal constants that Planck units, by definition, normalize to 1 are: the gravitational constant, G,the reduced Planck constant, ħ,the speed of light in a vacuum, c,the Coulomb constant, (4πε0)−1 (sometimes ke or k), andthe Boltzmann constant, kB (sometimes k). Planck units are sometimes called "God's units",[1][2] since Planck units are free of anthropocentric arbitrariness. Natural units help physicists to reframe questions. Base units[edit] can be expressed as

Amplituhedron An amplituhedron is a geometric structure that enables simplified calculation of particle interactions in some quantum field theories. In planar N = 4 supersymmetric Yang–Mills theory, an amplituhedron is defined as a mathematical space known as the positive Grassmannian. The connection between the amplituhedron and scattering amplitudes is at present a conjecture that has passed many non-trivial checks, including an understanding of how locality and unitarity arise as consequences of positivity. Research has been led by Nima Arkani-Hamed. Description[edit] In the approach, the on-shell scattering process "tree" is described by a positive Grassmannian, a structure in algebraic geometry analogous to a convex polytope, that generalizes the idea of a simplex in projective space.[2] A polytope is a kind of higher dimensional polyhedron, and the values being calculated are scattering amplitudes, and so the object is called an amplituhedron.[5] Implications[edit] See also[edit] References[edit]

Higgs boson: Excitement builds over 'glimpses' at LHC 13 December 2011Last updated at 04:19 ET By Paul Rincon Science editor, BBC News Website, Geneva The Higgs, so far, exists definitively only in simulations Anticipation is building in the run-up to presentations of the best-yet evidence for - or against - the existence of the Higgs boson. The famed particle is a missing link in current theories of physics, used to explain how things gains their mass. Rumours have been swirling about the findings for weeks, ahead of the announcement on Tuesday afternoon. It is likely to yield only tantalising hints, as the teams do not have enough data to claim a formal discovery. However, most physicists concede that not finding the Higgs boson is as exciting a prospect as finding it in the place where existing theory predicts it should be. "If we wouldn't find it it would be even - in a way - more exciting, but you know, both ways, it's a win-win situation," said Prof Stefan Soldner-Rembold, a particle physicist from the University of Manchester. Field day