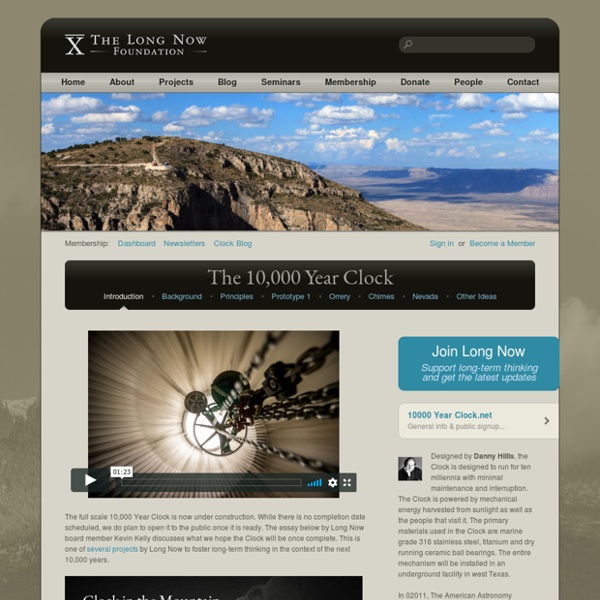 The full scale 10,000 Year Clock is now under construction. While there is no completion date scheduled, we do plan to open it to the public once it is ready. The essay below by Long Now board member Kevin Kelly discusses what we hope the Clock will be once complete. This is one of several projects by Long Now to foster long-term thinking in the context of the next 10,000 years. by Kevin Kelly There is a Clock ringing deep inside a mountain. is around to hear it. The Clock is real. The Clock is now being machined and assembled in California and Seattle. The Clock’s inventor introduced the idea of the Clock (in 01995) with this context: I cannot imagine the future, but I care about it. That’s Danny Hillis, a polymath inventor, computer engineer, and designer, inventor and prime genius of the Clock. Eno also composed the never-repeating melody generator that rings the Clock’s chimes inside the mountain. To see the Clock you need to start at dawn, like any pilgrimage. You keep climbing.

How the Traditional Japanese Art of Fish Printing Inspired a Modern Art Form Naoki Hayashi’s first encounter with gyotaku—the traditional Japanese art of fish printing—was anything but traditional. It was the early 1970s, and a few local families had taken their four-wheel drive vehicles out to some Oʻahu beaches to camp out and catch some fish. As an elementary-school kid, Hayashi’s job was to scale and gut the fish so there would be no mess at home. The adults were nearing the end of a successful day of fishing, meaning they were deep into a bucket of beer, sake, and soju. As Hayashi dug around inside a Hawaiian soldierfish for its red-frilled guts, an older family friend grabbed the fish from him, dipped it into rusty bucket full of red paint (a hand-me-down from the Korean War) and slapped the fish against Hayashi’s bare chest. “This is gyotaku,” the older man said, pointing to the distinct red imprint.

CALENDAR DATABASE (This page was constructed in the year 2000) Calendar Zone Major index to calendar sites, includes sections on celestial, cultural, religious, and today in history calendars, as well as holidays and the millennium. The American Secular Holiday Calendar Calculation of the Ecclesiastical Calendar Calendar and Holidays The Persian Calendar System Saturn Devouring His Son: Goya’s Dark Take On Greek Mythology Great art has the capacity to stir up phenomenal emotions within us, even if that’s a sense of unbridled terror. As that’s what Francisco José de Goya y Lucientes’ (1746-1828) disturbing painting below certainly does for us. Bloody hell. Look at that thing. Everything about that piece is frightening, as Francisco Goya didn’t paint it for public viewings.

Who is the Man with the Name that Rhymes? It's been a while since another post. There are many topics that I have cached that I'd like to write on. If it weren't for the troubling aspect of so many things eating at my free time, you'd see more posts on here. I'm not sure there are many readers on here anyway, I've notice the traffic has slowed down to very little these days. Partly because Google hasn't been indexing the site correctly which I fixed not too long ago. I'm sure the sporadic updates are another reason. Hokusai and the wave that swept the world - BBC Culture Rising in the East It’s worth recalling that what brought Hokusai and other ukiyo-e printmakers to the attention of Monet, Degas, Cassatt, and Lautrec were trade deals, on uneven terms, between Japan and the West. France and other industrial powers were thriving; Japan was in upheaval, as the shogunate gave way to the Meiji Restoration. So the exchange was uneven from the start, economically and culturally as well. Japan, in the Japoniste imagination, was a country preserved in amber – unchanged over its two-and-a-half centuries of isolation.

When time became regular and universal, it changed history What year is it? It’s 2019, obviously. An easy question. Last year was 2018. A forgotten 200-year-old guide to color, redesigned for the internet The nomenclature of colors we use today is really a machine language–numerical hex codes crafted to communicate with software on computers and printers. Before the age of CMYK and RBG, though, artists and scientists created their own languages for talking about and categorizing color. Though many have fallen into obscurity, at least one is now accessible to anyone with access to the internet: Werner’s Nomenclature of Colours. Published in 1814 by the painter Patrick Syme based on the work of geologist Abraham Gottlob Werner, Werner’s is a working dictionary of colors found in the natural world, complete with swatches and examples of animals, minerals, and vegetables where a particular hue could be found in the wild.

Chronocentrism Chronocentrism is the assumption that certain time periods (typically the present) are better, more important, or a more significant frame of reference than other time periods, either past or future. The perception of more positive attributes such as morality, technology, and sophistication to one's own time could lead an individual as a member of a collectivity to impose their forms of time on others and impede the efforts towards more homogeneous temporal commons.[1] History[edit] Chronocentrism (from the Greek chrono- meaning "time") was coined by sociologist Jib Fowles in an article in the journal Futures in February, 1974. Ethnocentrism[edit] How my astronomy data from the Lovell telescope was used to create an immersive light and sound show As a scientist, I was recently involved in bringing my work to the big screen. This was not a Hollywood sci-fi blockbuster but “big screen” in the literal sense: an art production about science that used the Lovell radio telescope, a 3,200-ton steel behemoth supporting of a 76-metre wide dish, to generate and show audio-visual art that drew on scientific data. I have been involved with numerous public engagement opportunities over the years: giving public lectures, visiting students in schools, interacting on social media, being interviewed about new discoveries. There is however another form of public engagement that I have come to experience in the past year, which I would probably never have considered if not for the fact that it came knocking at my door: connecting with an artist developing a piece inspired by the scientific work that my colleagues and I do.

The Tail End We made a fancy PDF of this post for printing and offline viewing. Buy it here. In a post last year, we laid out the human lifespan visually. By years: By months: COSMOS 2018 Hidden in Plain Sight - Abandon Normal Devices Hidden in Plain Sight was a new data driven audio-visual work created for Jodrell Bank’s iconic Lovell Telescope. Developed by Addie Wagenknecht, it was the second work to be developed as part of COSMOS, premiering at bluedot festival 2018. A testament to a seemingly insatiable human appetite for exploration, structures such as the Lovell Telescope look monumental, but are in actuality just the tip of the iceberg sitting on top of great scientific endeavours.

Do you really need more time? The single biggest “push back” I get from people when I share about how building practices into their life can unleash new ideas and help them be more productive goes something like this: “Yeah, that’s great, but I really just don’t have the time.” After collecting myself, I reply…Did you at any point in the last week: Watch TV?