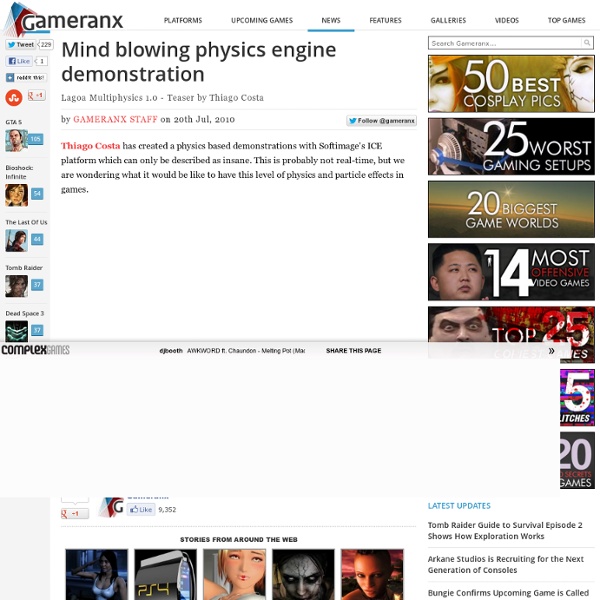 Physics Flash Animations We have been increasingly using Flash animations for illustrating Physics content. This page provides access to those animations which may be of general interest. The animations will appear in a separate window. The animations are sorted by category, and the file size of each animation is included in the listing. Also included is the minimum version of the Flash player that is required; the player is available free from The categories are: In addition, I have prepared a small tutorial in using Flash to do Physics animations. printer Eating 10 hot dogs in 6 minutes and belching the national anthem may impress your friends, but neither of those feats will do much for your body—at least not much good. Instead, why not train yourself to do something that may actually pay off? We're not talking bench presses and interval training (though those do help). You can teach your body to cure itself from everyday health ailments—side stitches, first-date jitters, even hands that have fallen asleep. Just study this list, and the next time your friends challenge you to an ice cream eating contest, chow down: You know how to thaw a brain freeze—and 17 other tricks that'll make everyone think you're the next David Blaine.

COSPLAY Hotties Featuring Power Girl, Black Cat & Jessica Nigri As Pokemon's Ash Ketchum By nailbiter111 - 4/29/2012 Jessica Nigri As Pokemon's Ash Ketchum By 12 North Photography (Click Images to Enlarge) Cool World's Holli Would By Usagi-Tsukino-krv Kit Quinn as Black Cat By Fremen9 Ardella as Power Girl By KrisEz 5 Ways To Hack Your Brain Into Awesomeness Much of the brain is still mysterious to modern science, possibly because modern science itself is using brains to analyze it. There are probably secrets the brain simply doesn't want us to know. But by no means should that stop us from tinkering around in there, using somewhat questionable and possibly dangerous techniques to make our brains do what we want. We can't vouch for any of these, either their effectiveness or safety.

Ten more games that will make you think about life - StumbleUpon Life, eh? It's all a bit mad really, isn't it? Here we are, the products of millions of years of chance chemical and biological reactions, wandering around on a dying rock as it spins through the vast, indifferent universe with nought but the knowledge of our own inevitable oblivion for company. A sobering thought. Math, Physics, and Engineering Applets Oscillations and Waves Acoustics Signal Processing Electricity and Magnetism: Statics Electrodynamics Nature: New set of cute animals Another amazing set of cute animals the nature has to offer. 1. Baby hedgehogs 2.

Bento Laptop Tablet Hybrid by René Woo-Ram Lee Bento is quite an exceptional and forward thinking concept by René Woo-Ram Lee. It’s quite a plausible scenario that most of use/own a tablet, a PC, external hard drives and a smartphone. Now combine the power of these to have fully customizable Bento Laptop! The Box accommodates all the gear to work as one whole unit or individually; as you see fit. Features Cubelets Makes High Tech Tools Available To Eight Year Olds - Video Vault - Portfolio.com Imagine if Pippi Longstocking and Mr. Rogers had a kid, and that kid grew up to be a mad scientist hocking robots to children and adults. Well, that's just about what startup ModRobotics has accomplished with this video promoting Cubelets. Founded in 2002 as a spinoff from Carnegie Mellon University, Cubelets obtained its initial funding from private endowments and the National Science Foundation.

Another 20 games that make you think about life - StumbleUpon First we gave you five. Then we gave you ten. Now we are giving you 20 games that make you think about life. String Theorists Squeeze Nine Dimensions Into Three A simulation of the early universe using string theory may explain why space has three observable spatial dimensions instead of nine. The leading mathematical explanation of physics goes beyond modern particle theory by positing tiny bits of vibrating string as the fundamental basis of matter and forces. String theory also requires that the universe have six or more spatial dimensions in addition to the ones observed in everyday life. Explaining how those extra dimensions are hidden is a central challenge for string theorists. “This new paper demonstrates, for the first time, that our 3-D space appears naturally … from the 9-D space that string theory originally has,” says Jun Nishimura of the High Energy Accelerator Research Organization in Tsukuba, Japan. He and his colleagues will publish their findings in an upcoming issue of Physical Review Letters.

Weight Loss Discovery Making National Headlines Last Updated: 4/06/2014 20:52 PST Did you know you can lose weight without traditional dieting? That’s what one new weight loss product wants you to believe.