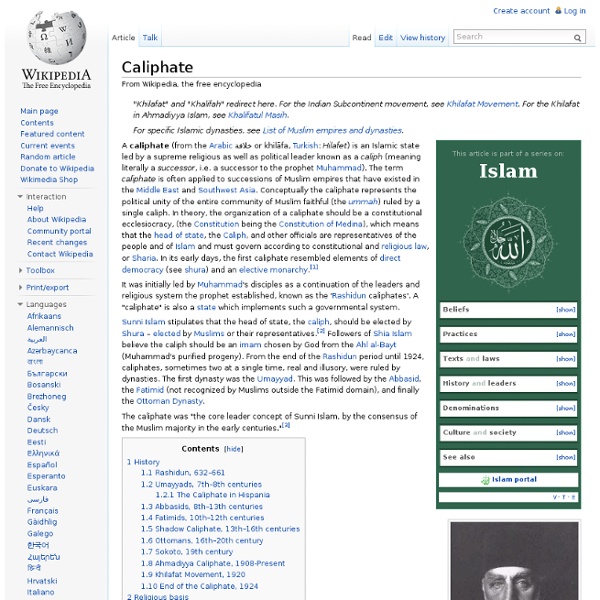 In its earliest days, the first caliphate, the Rashidun Caliphate, exhibited elements of direct democracy (shura).[1] It was led, at first, by Muhammad's immediate disciples and family as a continuation of the religious systems he had introduced. The Sunni branch of Islam stipulates that as a head of state, a caliph should be elected by Muslims or their representatives.[2] Followers of Shia Islam, however, believe a caliph should be an Imam chosen by God (Allah) from the Ahl al-Bayt (the "Family of the House", Muhammad's direct descendents). From the end of the Rashidun period until 1924, caliphates, sometimes two at a single time, real and illusory, were ruled by dynasties. The first of these was the Umayyad dynasty, followed by the Abbasid, the Fatimid and finally the Ottoman dynasty. The caliphate was "the core leader concept of Sunni Islam, by the consensus of the Muslim majority in the early centuries".[3] History[edit] Rashidun (632–661)[edit] Rashidun Caliphate at its greatest extent

Roman roads Roman roads (in Latin, viae - singular via) were vital to the maintenance and development of the Roman state, and were built from about 500 BC through the expansion and consolidation of the Roman Republic and the Roman Empire.[1] They provided efficient means for the overland movement of armies, officials and civilians, and the inland carriage of official communications and trade goods.[2] Roman roads were of several kinds, ranging from small local roads to broad, long-distance highways built to connect cities, major towns and military bases. These major roads were often stone-paved and metaled, cambered for drainage, and were flanked by footpaths, bridleways and drainage ditches. They were laid along accurately surveyed courses, and some were cut through hills, or conducted over rivers and ravines on bridgework. Roman systems[edit] In the Itinerary of Antoninus, the description of the road system, after the death of Julius Caesar and during Augustus tenure, is as follows: Types[edit]

Likely future picture of global Islam Sunday, September 19, 2010 - Recently, Muammar Gaddafi stated that “There are signs that Allah will grant victory to Islam in Europe without sword, without gun, without conquest. We don’t need terrorists, we don’t need homicide bombers. The 50 plus million Muslims (in Europe) will turn it into the Muslim Continent within a few decades.” Irrespective of his summersaults in global politics, he could be right this time. The picture gets clearer if one looks at various research works on demographic changes of western countries in relation to the Muslim immigration and their fertility rate. The average Fertility Rate per family amongst the westerners is 1.65 as compared to the Muslims’ which is 8.1. As a result of this change; in France 30% of children age 20 years and below are Muslims. Four years ago, a meeting of 24 countries from OIC was held in Chicago. Spread poverty to lethal levels in the third world countries with high percentage of Muslims.

China sets sights on potash; investors take notice Commodities Corner By Myra P. Saefong, MarketWatch HONG KONG (MarketWatch) -- When the world's most populous nation sets its sights on securing a resource, it's in the best interest of investors to take notice -- and potash looks like China's next target. Potash is a key ingredient used in making fertilizers, which boost crop yields. "China is potash-deficient. Where the Water Buffalo Roam Throughout Asia, many farmers are replacing their water buffalo with more efficient modern tractors. It's no surprise then that China watched closely when Potash Corp. of Saskatchewan Inc. China's state-owned Sinochem Corp. has hired investment bankers to probe a role for it in the fertilizer company's future, according to a report in The Wall Street Journal. News reports this week said Sinochem has also approached Singapore's Temasek Holdings regarding the possible creation of a bidding consortium for Potash Corp. China's actions have raised questions as to whether it's trying to monopolize resources. Securing its place