How to use crystals for healing, cleansing, programming and dedicating. 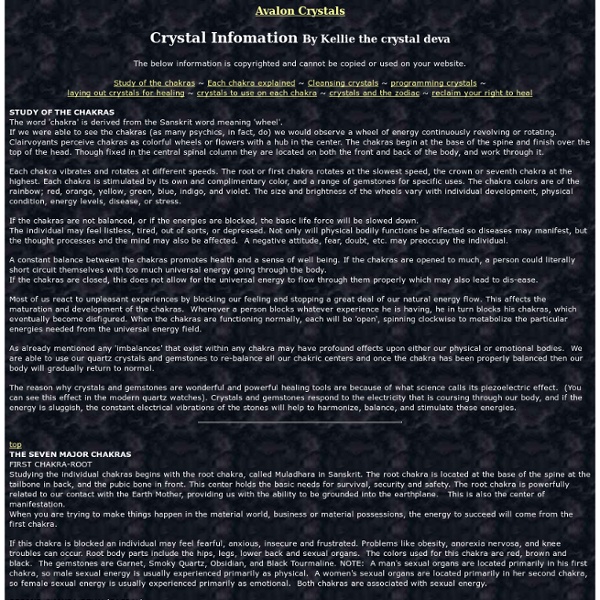 Avalon Crystals The below information is copyrighted and cannot be copied or used on your website. Study of the chakras ~ Each chakra explained ~ Cleansing crystals ~ programming crystals ~laying out crystals for healing ~ crystals to use on each chakra ~ crystals and the zodiac ~ reclaim your right to heal STUDY OF THE CHAKRASThe word 'chakra' is derived from the Sanskrit word meaning 'wheel'.If we were able to see the chakras (as many psychics, in fact, do) we would observe a wheel of energy continuously revolving or rotating. Each chakra vibrates and rotates at different speeds. If the chakras are not balanced, or if the energies are blocked, the basic life force will be slowed down.The individual may feel listless, tired, out of sorts, or depressed. A constant balance between the chakras promotes health and a sense of well being. Most of us react to unpleasant experiences by blocking our feeling and stopping a great deal of our natural energy flow. top 1. 2. 3.

Love Potion Parfait | With Raw Intentions We all know that it’s important to have a healthy relationship with food. It’s something that we must engage with multiple times throughout our day simply to survive. While it works for some, and for a good while it was something I tried too, I just can’t fathom the idea now of being in a burdensome and restrictive relationship where a meal comes down to counting calories, often overeating, and then feeling guilty. I didn’t plan to post this parfait today but I had a pretty cool moment in the kitchen this afternoon. Prep Time: 10 minutes Servings: 1 parfait Ingredients:4 Peeled bananas10 Whole strawberries1.5 cups blackberries1.5 cup blueberries1 cup frozen cherriesHandful of raspberries (optional) Directions: 1. 2. 2. Like this: Like Loading...

Tree Hugging Now Scientifically Validated - Uplift Die hard conservatives love to disparage liberals as tree huggers, but it has been recently scientifically validated that hugging trees is actually good for you. Research has shown that you don't even have to touch a tree to get better, you just need to be within its vicinity has a beneficial effect. In a recently published book, Blinded by Science, the author Matthew Silverstone, proves scientifically that trees do in fact improve many health issues such as Attention Deficit Hyperactivity Disorder (ADHD), concentration levels, reaction times, depression and other forms of mental illness. The author points to a number of studies that have shown that children show significant psychological and physiological improvement in terms of their health and well being when they interact with plants and trees. So what is it about nature that can have these significant effects? The answer to how plants and trees affect us physiologically turns out to be very simple. Additional info:

Dream come true! Two 'mad scientists' create sleep mask that lets people CONTROL their dreams By Snejana Farberov Published: 17:42 GMT, 20 May 2012 | Updated: 21:50 GMT, 21 May 2012 In a twist straight out of the movie Inception, a duo of developers from Brooklyn, New York, have built a sleeping mask designed to allow people to have lucid dreams that they can control. While it may look like a standard sleeping mask, Remee has been billed as a special REM (Rapid Eye Movement) enhancing device that is supposed to help steer the sleeper into lucid dreaming by making the brain aware that it is dreaming. The goal of the product is to allow people to have the dreams of their choice, from driving a race car to flying to having lunch with Abraham Lincoln. Scroll down for video Futuristic: The Remee sleeping mask is billed as a device that allows people to control their dreams Follow the light: Remee features six LED lights that produce a sequence allowing the user to have lucid dreams Nolan was said to have come up with the idea ten years ago.

Breathingearth - CO2, birth & death rates by country, simulated real-time How Gem Hunting Works" Gem hunting is like playing the geological lottery. One person may spend hours performing backbreaking work and pay fees for access to mine tailings only to find a few semiprecious stones that aren't worth much. Another person may randomly reach into a pile of dirt and pull out a diamond worth thousands of dollars. Looking for interesting gems and crystals can be a rewarding hobby, even if you don't hit the jackpot. Many recreational gem hunters enjoy spending time outdoors, learning about geology and hanging out with their gem-hunting friends. There are many different ways to experience gem hunting, from fee digs to staking your own mining claim (all discussed later). Before you can attain geologic glory, there are a few details to mention about this hobby.