Artists Protest Jeff Koons’s Monument to Paris Terror Victims. Artists and gallerists have written an open letter, published in the French newspaper Libération, calling for the city of Paris not to install Jeff Koons’s sculpture Bouquet of Tulips (2016) outside of the Museum of Modern Art. 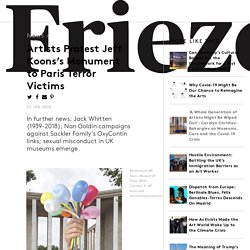 The artwork is intended as a monument to the 2015 terror attacks in the city, composed of bronze and aluminium, it appears as a giant hand clutching a bouquet of flowers, in a reference to the Statue of Liberty. The letter protests the work as inappropriate and financially reckless, and laments the absence of an open call for a proper monument.

‘We appreciate gifts, but free, unconditional, and without ulterior motives,’ they said. While Koons intended his sculpture as a gift, the production and installation costs were not included. Private donations have financed the sculpture’s EUR€3m million price tag, but the taxpayer will be forced to fund ground reinforcement requirements. Oh wow. This Week in NYC History: The Cornerstone of the Statue of Liberty’s Pedestal is Placed. SOL. Lost Symbols?: The Secrets of Washington DC - David Ovason. Paris,Queen-of-Peace - add to Paris Map. This Queen of Peace is quite an aristocratic lady. 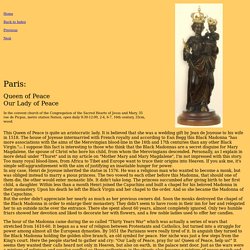 It is believed that she was a wedding gift by Jean de Joyeuse to his wife in 1518. The house of Joyeuse intermarried with French royalty and according to Ean Begg this Black Madonna "has more associations with the aims of the Merovingian blood-line in the 16th and 17th centuries than any other Black Virgin. "(1) I suppose this fact is interesting to those who think that the Black Madonnas are a secret disguise for Mary Magdalene, the spouse of Christ who bore his child, from whom the Merovingians descended. Personally, as I explain in more detail under "Thuret" and in my article on "Mother Mary and Mary Magdalene", I'm not impressed with this story. Our Lady of Peace - Wikipedia. Our Lady of Peace, Mother of Peace, Queen of Peace or Our Lady Queen of Peace is a title of the Blessed Virgin Mary in the Roman Catholic Church. 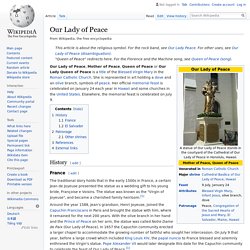 She is represented in art holding a dove and an olive branch, symbols of peace. Her official memorial feast is celebrated on January 24 each year in Hawaii and some churches in the United States. Elsewhere, the memorial feast is celebrated on July 9. History[edit] France[edit] The traditional story holds that in the early 1500s in France, a certain Jean de Joyeuse presented the statue as a wedding gift to his young bride, Françoise e Voisins. 2015 was 150th anniversary of SOL - was the cornerstobe laid November 13th? Issy, Paris - name derives from Latin 'Isiacum' - Wikipedia DELIBERATE misinformation, real meaning: Of Isis....this is deliberate covering. Talisman - shows that Robespierre's Cult of the Supreme Being Veilled Isis. Paris police close off major road in security operation. Rue De Rivoli in central Paris has been closed by police officers this eveningReports indicate that 'suspicious items' are currently being assessed by policeIt is believed the Paris Metro service is not stopping on the busy street tonight By Abe Hawken For Mailonline Published: 18:42 BST, 20 April 2017 | Updated: 19:03 BST, 20 April 2017 One of the busiest roads in Paris has been closed off by police this evening in what is believed to be a massive security operation. 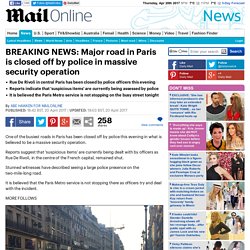 Reports suggest that 'suspicious items' are currently being dealt with by officers as Rue De Rivoli, in the centre of the French capital, remained shut. Stunned witnesses have described seeing a large police presence on the two-mile-long road. It is believed that the Paris Metro service is not stopping there as officers try and deal with the incident. Mary In Our Life: Atlas of the Names and Titles of Mary, The Mother of Jesus ... - Nicholas J. Santoro. Laws of Silence: Two Black Madonnas of Paris.

While I'm in the process of re-publishing all my old Black Madonna essays on LoS, I figger I might as well get around to writing a little bit on some of the other Madonnas I've since seen but yet to write about. 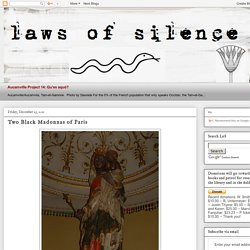 Notre Dame de Bonne Délivrance, located in the wealthy Parisian suburb of Neuilly-sur-Seine, is one of the two Black Virgins I saw this time last year when I spent a week in Paris. She is an utterly charming example of the genre, perhaps the most graceful I have seen; she's definitely one of if not the blackest. Her chapel is a tidy design, with clean lines and a delicate palette. Let's face it, French churches tend to be dark, damp and gloomy affairs.

This statue is fortunate to be found in such a well-maintained spot, and regularly open to visitors. One of these windows pictures a nobleman in prayer before the Virgin and in this window. Allow me to quote Wikipedia at length to provide some history about this statue: ....Notre Dame de Bonne Délivrance.... When the church [St. Sex and Race, Volume 1: Negro-Caucasian Mixing in All Ages and All Lands ... - J. A. Rogers. JOEL AUGUSTUS ROGERS (September 6, 1880–March 26, 1966) was a Jamaican-American author, journalist, and historian who contributed to the history of Africa and the African diaspora, especially the history of African Americans in the United States. 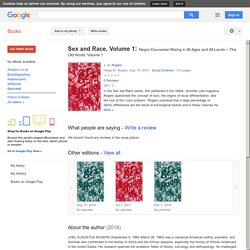 His research spanned the academic fields of history, sociology and anthropology. He challenged prevailing ideas about race, demonstrated the connections between civilizations, and traced African achievements. He was one of the greatest popularizers of African history in the twentieth century. Rogers addresses issues such as the lack of scientific support for the idea of race, the lack of black history being told from a black person’s perspective, and the fact of intermarriage and unions among peoples throughout history. A respected historian and gifted lecturer, Rogers was a close personal friend of the Harlem-based intellectual and activist Hubert Harrison. On Thelemic Catholicism.

Thank you for your interest in Patheos newsletters! 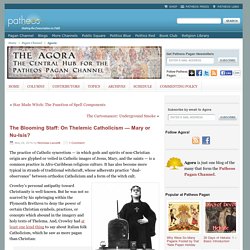 Please enter your email address below and click the "Subscribe" button. Thank you for your subscription. You can visit your Preference Center to complete your profile and see what else we have to offer. We apologize, we were unable to complete your subscription at this time, please try again later. If this error persists please contact us at communications@patheos.com. Black Madonna. Black Madonna of Outremeuse in a procession Madonna at House of the Black Madonna, Prague The icon of Our Lady of the Gate of Dawn, Vilnius Studies and research[edit] Important early studies of dark images in France were done by Marie Durand-Lefebvre (1937), Emile Saillens (1945), and Jacques Huynen (1972). 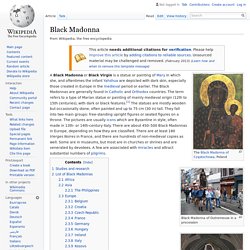 The ISIS of Paris. In view that he painted the coronation of Napoleon a few years later, in 1804-5, and that the Arc de Triomphe was designed in 1806-11 by Chalgrin, and the scene of the ‘Triumph of Napoleon’ was sculpted in 1933 by the artist Jean-Pierre Cortot, then we are justified in supposing that the sequence of events suggests that in the mind of Napoleon and the artists that undertook the work on the Arc de Triomphe on his behalf, the ‘Place de l’Etoile’ (Arc de Triomphe) was a symbol of Isis and her ‘star’, Sirius, which he also had placed on the coat of arms of Paris. 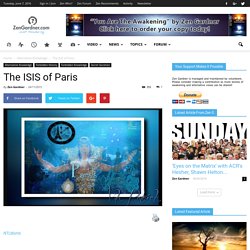 Later, in 1836, the ‘Citizen’ king, Louis-Philippe I, who had been responsible for the raising of the Egyptian obelisk at the Place de la Concorde, also completed the construction of the Arc de Triomphe. In fact it was he who commissioned the artist Cortot to sculpt the ‘Triumph of Napoleon’ on the east façade. The above article was published in MAS ALLA MAGAZINE (Spain) August 2002 and in HERA MAGAZINE (Italy) Sept. 2002 L.M. OMG its really really real - Paris cleans symbolic landmark - guess who.

AFP — Paris city workers on Tuesday set to scrubbing a monumental bronze statue that has become a battered rallying point for France’s secular republic after a string of terror attacks. 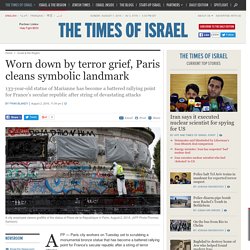 Get The Times of Israel's Daily Edition by email and never miss our top stories Free Sign up! The 133-year-old statue of Marianne, a symbol of the French republic, is situated on one of Paris’s largest squares, the Place de la Republique, which has become a nerve center for mourners and protesters. Workers clad in white overalls cordoned off the statue with barriers on Tuesday morning, removing the decaying flowers, torn messages of peace and candles that had piled up around its base. They then set to tackling graffiti that has covered the pedestal of the statue, a large stone structure bearing three sculptures symbolizing the national motto Liberte, Fraternite and Egalite (Liberty, Fraternity and Equality). “It is sad, but I think it is also a good thing to erase Paris’s sadness. From Charlie to Madonna. St. Genevieve black madonna. Holy Ghost Fathers - a cult of ISIS - consecrated to the 'Virgin' (ISIS) the first real find in weeks - sent chills up my spine.

The Congregation of the Holy Ghost (full title, Congregation of the Holy Ghost under the protection of the Immaculate Heart of Mary, or in Latin, Congregatio Sancti Spiritus sub tutela Immaculati Cordis Beatissimae Virginis Mariae, and thus abbreviated C.S.Sp.) is a Roman Catholic congregation of priests, lay brothers, and since Vatican II, lay associates. Congregation members are known as Spiritans in Continental Europe, and as the Holy Ghost Fathers in English-speaking countries, although even there they are becoming known as Spiritans. A Spiritan priest or brother has the abbreviation C.S.Sp. after his name. History[edit] Spiritans in the 1840s dedicated themselves to working with newly freed slaves on the islands of Haiti, Mauritius and Réunion. Saint-Étienne-des-Grès, Paris. An engraving of Saint-Étienne-des-Grès from before the French Revolution. History[edit] Talisman: Sacred Cities, Secret Faith - Graham Hancock, Robert Bauval.

Massive French source. LE GRAND UN. SECRETS OF PARIS English. Genie de la Liberte - Spirit of Liberty - golden (Ormus); eternal flame - all over a burial at the Place de la Bastille. Eiffel Tower lit up, Tricolore - a Beacon - illuminating - and saying 'we have control of France' The Eiffel Tower has reopened for the first time since the devastating terror attacks in Paris last FridayThe iconic tourist attraction was lit up in the colours of the French Tricolore after two days off complete darknessThe words 'fluctuat nec mergitur' - the city's Latin motto, meaning 'tossed but not sunk' - were also beamed onto a section of the towerSee our full coverage of the ISIS Paris attacks at www.dailymail.co.uk/isis By Tom Wyke for MailOnline Published: 21:43 GMT, 16 November 2015 | Updated: 11:58 GMT, 17 November 2015.

The Eiffel Tower is lit up like a rainbow in solidarity with Orlando. The Eiffel Tower is currently lit in rainbow colors in solidarity with the victims of the attack at Pulse nightclub in Orlando late Saturday night. The tribute in Paris is one of many vigils worldwide in honor of the LGBTQ community and those who lost their lives and sustained injuries at the gay nightclub, including tributes in the United Kingdom and the United States. "Paris is with Orlando. REVEALED: Paris saved from second terror attack by brave Muslim woman. The Peace Sign and Satanism - Venus, Lucifer - its another sign for the Aum. Operation Templer - name unnoticed by the public, ISIS plot on London, Brighton, Bath and Ipswich FOILED. The Parisii of Isis. I originally had written this article in July 2014. Eagles of Death - 33rd Degree - Kiss the 'Devil' - Lucifer - Venus - ISIS.

Huguenot cross. The Huguenot cross is a Christian religious symbol originating in France and is one of the more recognisable and popular symbols of the evangelical reformed faith. It is commonly found today as a piece of jewelry (in gold or silver) or engraved on buildings connected with the Reformed Church in France. Statue of Liberty. "ISIS" is Grand Orient Freemasonry - Napoleon, Shriner masonry & the Lodge of ISIS. Loge Bonaparte, Paris 1811. Official Website for Talisman: Sacred Cities, Secret Faith. Isis of Paris. Paris from 'Bar-Isis' - News Archive - Dundee Courier, 1899 - M Jules Bois, connected to OTO - French with a Scottish accent. The Order of St. John - Knights Hospitaler - The Eagles - The ISIS hand sign, the sign of St John. Occult Holidays And Sabbats.