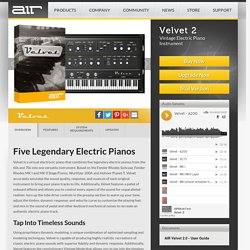 Based on the Fender Rhodes Suitcase, Fender Rhodes MK I and MK II Stage Pianos, Wurlitzer 200A and Hohner Pianet-T, Velvet accurately emulates the sound quality, response, and nuances of each original instrument to bring your piano tracks to life. Additionally, Velvet features a pallet of onboard effects and allows you to control every aspect of the sound for unparalleled realism: turn up the tube drive controls in the preamp section to warm up your tone; adjust the timbre, dynamic response, and velocity curve to customize the playing feel; and mix in the sound of pedal and other keyboard mechanical noises to recreate an authentic electric piano track. 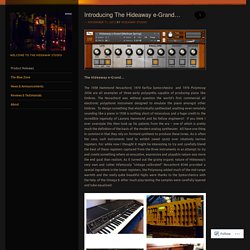 The Novachord was without question the world’s first commercial all electronic polyphonic instrument designed to emulate the piano amongst other timbres. To design something that electronically synthesized anything even remotely sounding like a piano in 1938 is nothing short of miraculous and a huge credit to the incredible ingenuity of Laurens Hammond and his fellow engineers!! If you think I ever overstate this then look up his patents from the era – one of which is pretty much the definition of the basis of the modern analog synthesizer. All have one thing in common in that they rely on formant synthesis to produce these tones. After bringing together such a rare combination of instruments I thought it might be quite fitting to introduce some equally unusual signal processing technology. Equipment Used. 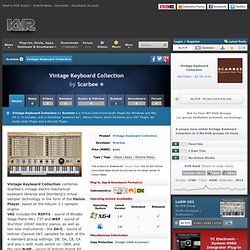 VKC includes the RSP73 - sound of Rhodes Stage Piano MK1 73T and WEP - sound of Wurlitzer 200AT electric pianos, as well as two new instruments - the D6-C - sound of Hohner Clavinet D6T, sampled for each of the 4 standard pickup settings: DB, DA, CB, CA and also 1 with mute switch on: DBM, and the rare N-HP - sound of Hohner Pianet NT. With the D6-C, Scarbee introduces 'Horizontal Release Technology', whereby release samples are chosen from the wave pool depending on how long a key has been held - allowing a staccato played note to create a different release tone to a note which is sustained for a longer period.

To achieve this, each key sampled on the D6-C has 24 release samples assigned to it alone. Fab Four Virtual Instrument. FAB FOUR is a virtual (software) instrument that includes 45 instruments inspired by the sounds of the Beatles. 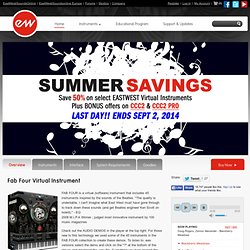 "The quality is undeniable, I can't imagine what East West must have gone through to track down these sounds (and get Beatles engineer Ken Scott on board). " - EQ 2008 M.I.P.A Winner ; judged most innovative instrument by 100 music magazines Check out the AUDIO DEMOS in the player at the top right. For those new to this technology we used some of the 45 instruments in the FAB FOUR collection to create these demos. Arturia Wurlitzer V. Tubed Keys MkI 73. Tubed Keys - Rhodes MkI 73 When recording a Rhodes piano, nearly all, (or all?) 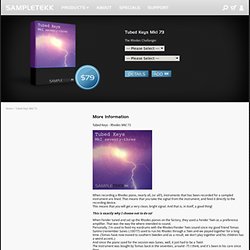 , instruments that has been recorded for a sampled instrument are lined. That means that you take the signal from the instrument, and feed it directly to the recording device. This means that you will get a very clean, bright signal. And that is, in itself, a good thing!

O'Grady's Old Dirty Wurli. Spitfire Labs Wurli. RMI Rocksichord. Rocky Mount Instruments, inc was established as a division of the Allen Organ Company, a massive concern that was later to become a pioneer in the use of digital sound generation in electric organs. 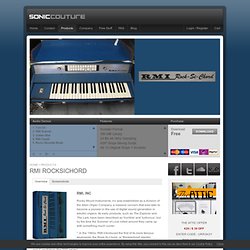 Its early products, such as The Explorer and The Lark, have been described as 'horrible' and 'ludicrous', but by the time the Summer of Love rolled around they came up with something much cooler : "..In the 1960s, RMI introduced the first of its more famous keyboards: the Rock-Si-Chord, or 'Rocksichord' electric harpsichord. There were two primary versions of this, one with a single set of 8' oscillators (the '100' series), the other with 8' and 4' oscillators (the '200' series). The original Model 100 offered just two voices, String and Lute, which you could select individually or as a pair. The more expensive 100A had five: Harpsi, Cembalo, Lute, Guitar A, and Guitar B. From an Article by Gordon Reid in Sound On Sound, Dec 2001 - ‘Prog Spawn’ . Hall Of Fame About This Rocksichord.