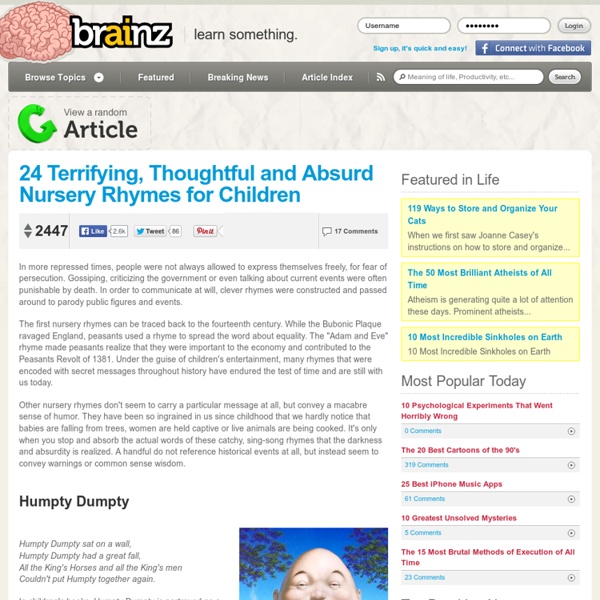 In more repressed times, people were not always allowed to express themselves freely, for fear of persecution. Gossiping, criticizing the government or even talking about current events were often punishable by death. In order to communicate at will, clever rhymes were constructed and passed around to parody public figures and events. The first nursery rhymes can be traced back to the fourteenth century. While the Bubonic Plaque ravaged England, peasants used a rhyme to spread the word about equality. The "Adam and Eve" rhyme made peasants realize that they were important to the economy and contributed to the Peasants Revolt of 1381. Other nursery rhymes don't seem to carry a particular message at all, but convey a macabre sense of humor. Humpty Dumpty Humpty Dumpty sat on a wall,Humpty Dumpty had a great fall,All the King's Horses and all the King's menCouldn't put Humpty together again. In children's books, Humpty Dumpty is portrayed as a large egg, usually dressed like a little boy.

The Real Reasons We Dropped Atom Bombs on Japan By David Redick Due to the recent 70th anniversary of dropping two atom bombs on Japan, there has been a lot of discussion about why we did it. American ‘Patriots’ claim it was necessary to ‘save lives’ by avoiding an invasion of Japan. This is the standard false pitch from our self-serving ‘leaders’ in DC. I offer the info below as adequate proof that we did it for other less noble reasons. Arts Integration: Resource Roundup Facebook Edutopia on Facebook Twitter Edutopia on Twitter Google+ Pinterest

Royals told: open archives on family ties to Nazi regime Buckingham Palace has been urged to disclose documents that would finally reveal the truth about the relationship between the royal family and the Nazi regime of the 1930s. The Sun’s decision to publish footage of the Queen at six or seven years old performing a Nazi salute, held in the royal archives and hitherto unavailable for public viewing, has triggered concerns that the palace has for years sought to suppress the release of damaging material confirming the links between leading royals and the Third Reich. Unlike the National Archives, the royal archives, which are known to contain large volumes of correspondence between members of the royal family and Nazi politicians and aristocrats, are not compelled to release material on a regular basis. Now, as that relationship becomes the subject of global debate, historians and MPs have called for the archives to be opened up so that the correspondence can be put into context.

The Jesuit Vatican New World Order The jesuit Templars of the Crown owns great britain and The U.S. The governmental and judicial systems within the United States of America, at both federal and local state levels, is owned by the london vatican crown “the Crown,” which is a private foreign power. ruled buy the vatican Before jumping to conclusions about the Queen of England or the Royal Families of Britain owning the U.S.A., this is a different “Crown” and is fully exposed and explained below. We are specifically referencing the established Templar Church,this is the real power over the united states known for centuries by the world as the “Crown.”

The Polio Vaccine Cancer Cover-up The polio vaccines developed in the 1950s by Jonas Salk and Albert Sabin allegedly eradicated one of the most feared diseases of the 20th century. The media hailed the success of these vaccines as a modern day miracle. However, the polio story has a much darker side that has mostly been kept a secret. Both Sabin’s live virus vaccine given orally and Salk’s inactivated virus vaccine given by injection were far from perfect. In fact, in 1955 the vaccine used in Berkley, California infected some 200 children, leaving several dead and many paralyzed. Yet this incident proved minor compared to what was later discovered. Orphism (art) The Orphists were rooted in Cubism but moved toward a pure lyrical abstraction, seeing painting as the bringing together of a sensation of pure colors. More concerned with the expression and significance of sensation, this movement began with recognizable subjects but was rapidly absorbed by increasingly abstract structures. Orphism aimed to dispense with recognizable subject matter and to rely on form and color to communicate meaning. The movement also aimed to express the ideals of Simultanism: the existence of an infinitude of interrelated states of being.[3]

Papal Bull Background A Papal Bull is a formal document issued by a Roman Death Cult Pontiff upon a major act of law, curse or claim to extend the power of the Cult over its claimed domination of the world, all nations, all people, all law and all religions. All legitimate Papal Bulls were issued on human skin, usually the skin of a sacrificed child, or some famous heretic. Rotating Snake Illusion Back­ground – In the image above the strong (and beau­ti­ful) ro­ta­tion of the “wheels” oc­curs in re­la­tion to eye move­ments. On steady fix­a­tion the ef­fect van­ishes. For an ex­plana­tory hy­poth­e­sis, view the an­i­ma­tion on the right. You ma y wish to press the ‘Stop’ but­ton after a while … it gets on one’s nerves ;-). Lobotomy For World War II Veterans: Psychiatric Care by U.S. Government Documentary In His Own Voice Roman Tritz talks about his lobotomy, and his life.

Operation Condor: Deciphering the U.S. Role Crimes of WarJuly, 2001 According to recently de-classified files, the U.S. aided and facilitated Condor operations as a matter of secret but routine policy. In mid-April, 2001, Argentine judge Rodolfo Canicoba issued path-breaking international arrest warrants for two former high-ranking functionaries of the military regimes of Chile and Paraguay. These two, along with an Argentine general also summoned by the court, are accused of crimes committed within the framework of Operation Condor. Judge Canicoba presides over one of several cases worldwide investigating abductions and murders linked to Condor, a shadowy Latin American military network created in the 1970s whose key members were Chile, Argentina, Uruguay, Bolivia, Paraguay, and Brazil, later joined by Peru and Ecuador. Condor was a covert intelligence and operations system that enabled the Latin American military states to hunt down, seize, and execute political opponents across borders.

Impermanent Sand Paintings by Andres Amador San Francisco-area landscape artist Andreas Amador etches massive sand drawings onto beaches during full moons when his canvas reaches its largest potential. Using only a rake and often several helpers the geometric and organic shapes are slowly carved into the sand, often interacting with the physical topography like the stones in a zen garden. The works exist for only a few moments, just long enough to snap a few photographs before being completely engulfed by the encroaching tide. Amador has also collaborated on a number of killer marriage proposals, the question popped as part of his elaborate drawings viewable from an elevated distance. You can see much more on his website, and he also sells prints. If you liked this, also see the works of Sonja Hinrichsen and Jim Denevan.

Are All But One US Presidents Related? If America declared its Independence from the European monarchies in 1776, how is it possible that every single president has descended from European monarchs? If presidents are democratically elected as we are told, what are the odds that American’s always choose members of British and French royal bloodlines? “The Americas have always been owned and governed by the same royal families of Britain and Europe that conventional history states as being among those defeated during the wars of so-called ‘Independence.’” -Michael Tsarion, “Astrotheology and Sidereal Mythology”

Funny how childrens fables, fairy tales are filled with so much horrific adult content ! by mirlen101 May 15