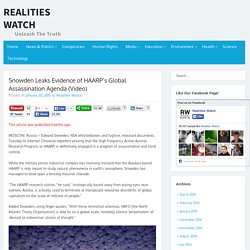 MOSCOW, Russia – Edward Snowden, NSA whistleblower and fugitive, released documents Tuesday to Internet Chronicle reporters proving that the High Frequency Active Auroral Research Program, or HAARP, is definitively engaged in a program of assassination and mind control. While the military prison industrial complex has routinely insisted that the Alaskan-based HAARP is only meant to study natural phenomena in earth’s ionosphere, Snowden has managed to blow open a brutally massive charade.

“The HAARP research station,” he said, “strategically based away from prying eyes near Gakona, Alaska, is actually used to terminate or manipulate would-be dissidents of global capitalism on the scale of millions of people.” Added Snowden, using finger quotes, “With these terrestrial antennas, NATO [the North Atlantic Treaty Organization] is able to, on a global scale, remotely silence ‘perpetrators’ of ‘deviant or subversive’ strains of thought.” 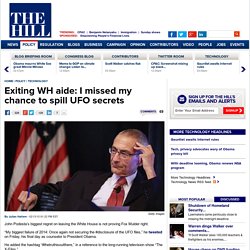 “My biggest failure of 2014: Once again not securing the #disclosure of the UFO files,” he tweeted on Friday, his final day as counselor to President Obama. He added the hashtag “#thetruthisoutthere,” in a reference to the long-running television show “The X-Files.” Podesta is leaving the White House on Friday after one year helping to oversee climate change and energy policy, among other issues, and is seen as a likely choice to lead Hillary Clinton’s expected presidential campaign. He formerly worked as chief of staff to President Bill Clinton before starting the liberal Center for American Progress think tank. The humorous tweet about his time in office came in a list of his top 10 moments over the last year, including the landmark joint agreement between U.S. and China to reduce carbon emissions and an effort to protect people’s privacy amid the rise of “big data” in the digital age. The Black Knight Satellite, The 13,000 Year Old Ancient Satellite Orbiting The Earth. 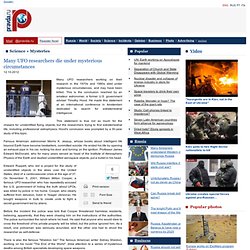 This is the conclusion reached by an amateur astronomer, a former U.S. government adviser Timothy Hood. He made this statement at an international conference in Amsterdam dedicated to search for extraterrestrial intelligence. This statement is true not so much for the chasers for unidentified flying objects, but the researchers trying to find extraterrestrial life, including professional astrophysics. Hood's conclusion was prompted by a 30-year study of this topic.

Famous American astronomer Morris K. Edward Ruppelt, who led a project for the study of unidentified objects in the skies over the United States, died of a cardiovascular crisis at the age of 37. Before the incident the police was told that Cooper threatened harmless residents, believing, apparently, that they were chasing him on the instructions of the authorities.