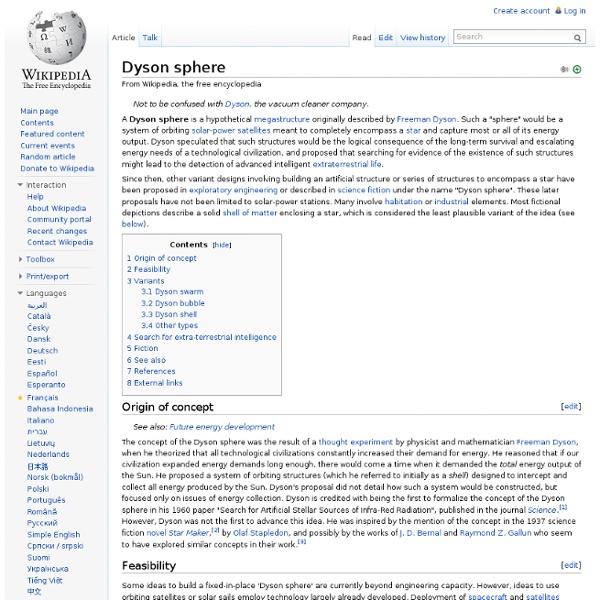 Dyson sphere is a hypothetical megastructure that completely encompasses a star and hence captures most or all of its power output. It was first described by Freeman Dyson. Dyson speculated that such structures would be the logical consequence of the long-term survival and escalating energy needs of a technological civilization, and proposed that searching for evidence of the existence of such structures might lead to the detection of advanced intelligent extraterrestrial life. Different types of Dyson spheres correlate with information on the Kardashev scale. Since then, other variant designs involving building an artificial structure or series of structures to encompass a star have been proposed in exploratory engineering or described in science fiction under the name "Dyson sphere". Origin of concept[edit] Feasibility[edit] Some ideas to build a fixed-in-place 'Dyson sphere' are currently beyond humanity's engineering capacity. Variants[edit] Dyson swarm[edit] Dyson bubble[edit]

Kardashev scale The Kardashev scale is a method of measuring a civilization's level of technological advancement, based on the amount of energy a civilization is able to utilize.[1] The scale has three designated categories called Type I, II, and III. A Type I civilization uses only resources available on its home planet, Type II harnesses all needed energy from its local star, and Type III of its galaxy.[2] The scale is only hypothetical, but it puts energy consumption in a cosmic perspective. It was first proposed in 1964 by the Soviet astronomer Nikolai Kardashev. Various extensions of the scale have been proposed since, from a wider range of power levels (types 0, IV and V) to the use of metrics other than pure power. Definition[edit] Type I "Technological level close to the level presently attained on earth, with energy consumption at ≈4×1019 erg/sec (4 × 1012 watts) Type II Type III "A civilization in possession of energy on the scale of its own galaxy, with energy consumption at ≈4×1044 erg/sec

Home ENG - Leonardo da Vinci | OFFICIAL WEBSITE Here is a new way for you to engage history and culture. This portal, the exhibitions, publications and everything involved in the “Leonardo3” project are the result of research activities and work carried out by L3’s founding partners, Mario Taddei and Edoardo Zanon. Leonardo3 (L3) is an innovative media company (research laboratory, creation of exhibitions and museums; editorial, television and multi-media projects; publishing house). Our mission is to study, interpret and make our artistic and scientific heritage available and enjoyable to the general public through the use of innovative techniques. In our work, we place particular importance on three-dimensional (3D) reconstructions, hence the “3” in the name Leonardo3. As part of our efforts to promote the work of da Vinci, we have created a digital version of the Codex Atlanticus.

Warm-Blooded Plants and Freeze-Dried Fish by Freeman J. Dyson At that time most of the shuttle missions were carrying unmanned satellites into orbit for various purposes -- some scientific, some commercial, and some military. These launching jobs could just as well have been done automatically. Only a few of the shuttle missions really need people on board, to do experiments or to repair the Hubble Space Telescope, for example. After failing to eviscerate the shuttle, I wandered into the museum of the Johnson Space Center, where there is a collection of rocks that astronauts brought back from the Moon. It seemed like a miracle. Things have changed since then. The Europa Ocean NOTHER place where life might now be flourishing is in a deep ocean on Jupiter's satellite Europa. To land a spacecraft on Europa, with the heavy equipment needed to penetrate the ice and explore the ocean directly, would be a formidable undertaking. Freeze-dried fish orbiting Jupiter is a fanciful notion, but nature in the biological realm has a tendency to be fanciful.

Neurotheology: This Is Your Brain On Religion Principles of NeurotheologyBy Andrew B. NewbergPaperback, 284 pagesAshgateList price: $29.95 "Neurotheology" is a unique field of scholarship and investigation that seeks to understand the relationship specifically between the brain and theology, and more broadly between the mind and religion. If neurotheology is to be considered a viable field going forward, it requires a set of clear principles that can be generally agreed upon and supported by both the theological or religious perspective and the scientific one as well. It is important to infuse throughout the principles of neurotheology the notion that neurotheology requires an openness to both the scientific as well as the spiritual perspectives. In short, for neurotheology to be successful, science must be kept rigorous and religion must be kept religious. When considering the primary reasons for developing neurotheology as a field, we can consider four foundational goals for scholarship in this area. 1. 2. 3. 4.

Mars sample return mission Sample return concept A Mars sample return mission (MSR) would be a spaceflight mission to collect rock and dust samples from Mars and to return them to Earth. Sample return would be a very powerful type of exploration, because analysis is freed from the time, budget, and space constraints of spacecraft sensors.[1] All of Earth's laboratories could potentially study a sample.[1] According to Louis Friedman, Executive Director of The Planetary Society, a Mars sample return mission is often described by the planetary science community as the "holy grail" of robotic space missions, due to its high expected scientific return-on-investment.[2] Over time, several missions were planned but none of the proposed missions got beyond the planning phase. MSR was the highest priority Flagship Mission proposed for NASA by the Planetary Decadal Survey 2013-2022: The Future of Planetary Science.[3] Scientific value[edit] History[edit] SCIM[edit] NASA-ESA plan[edit] NASA proposals[edit] Additional plans[edit]

120 Ways to Boost Your Brain Power Here are 120 things you can do starting today to help you think faster, improve memory, comprehend information better and unleash your brain’s full potential. Solve puzzles and brainteasers.Cultivate ambidexterity. Use your non-dominant hand to brush your teeth, comb your hair or use the mouse. Readers’ Contributions Dance! Contribute your own tip! There are many, many ways to keep our brains sharp. The Dialectic of the Nature-Society-System | Fuchs | tripleC: Communication, Capitalism & Critique. Open Access Journal for a Global Sustainable Information Society Abstract There are four logical possibilities for conceiving the relationship of nature and society: the reduction of society to nature, the projection of nature into society, dualism, and a nature-society-dialectic. This differentiation results in four different approaches. Keywords nature; society; social theory