Welcome to the Google+ Pearltree!
Google+ has over 90 days now and it has grown a lot.
For those of us that were from the begining it's very easy to use but many new users are finding it hard to figure out all the things you can do.

Plus there are so many things that it gets really hard to keep track of everything even for those of us that grew to know it very well.
Help us make this pearltree grow.

About the Invites you don't need them anymore. Google+ is a 100% open to the public.

Find People on Google+ - Google+ Directory. Google+ Gets A Big Refresh With New Navigation, A Redesigned Stream, A Dedicated Hangouts Page & More. Google this morning is announcing a new look for its social network, Google+, which introduces a revamped navigation, with drag-and-drop elements and actions that appear when you hover over each item, as well as the introduction of new features aimed at making it easier to discover conversations to join, new profile pages, a dedicated page for Google+ Hangouts (Google+’s multi-person video chat offering), and more.

After trying it out for awhile it seems like an small improvement but mostly just as if they moved things around . Not any real improvements . Except maybe the Hangouts section which I never use. – mirlen101

Looks like FaceBook ;-/ I think it will be ok once I get used to it. But it looks like they changed things just to change things ;-/ Like "oh this is on the left lets put that on the right" . "This was on the left so lets put that on the right" ;-/ Some times I wonder about their logic and common sense ;-/ I also wonder how a company with so many resources gets so little done . I noticed a huge amount of people who were spending a lot of time on G+ are gone now . Google needs to get real serious or it's going to be just another flopped attempt at the social scene. – mirlen101

What do you think of Google+ new version ? – amsika

It’s interesting that Google+ has now changed its design, after its first efforts received such praise. 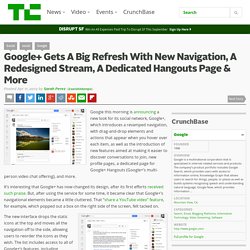 But, after using the service for some time, it became clear that Google+’s navigational elements became a little cluttered. That “share a YouTube video” feature, for example, which popped out a box on the right side of the screen, felt tacked on. The new interface drops the static icons at the top and moves all the navigation off to the side, allowing users to reorder the icons as they wish. Google+ Search. Google+ Refresh: Just Like Facebook, It's All About the Apps. Barely a year into Google’s social initiative, Google+, the company has decided to re-imagine the user interface. 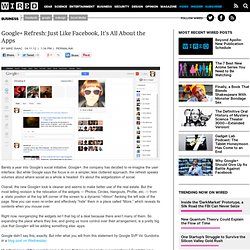 But while Google says the focus is on a simpler, less cluttered approach, the refresh speaks volumes about where social as a whole is headed: It’s about the widgetization of social. Overall, the new Google+ look is cleaner and seems to make better use of the real estate. But the most telling revision is the relocation of the widgets — Photos, Circles, Hangouts, Profile, etc. — from a static position at the top left corner of the screen to a dynamic “ribbon” flanking the left side of the page. Now you can even re-order and effectively ”hide” them in a place called “More,” which reveals its contents when you mouse over. Right now, reorganizing the widgets isn’t that big of a deal because there aren’t many of them.