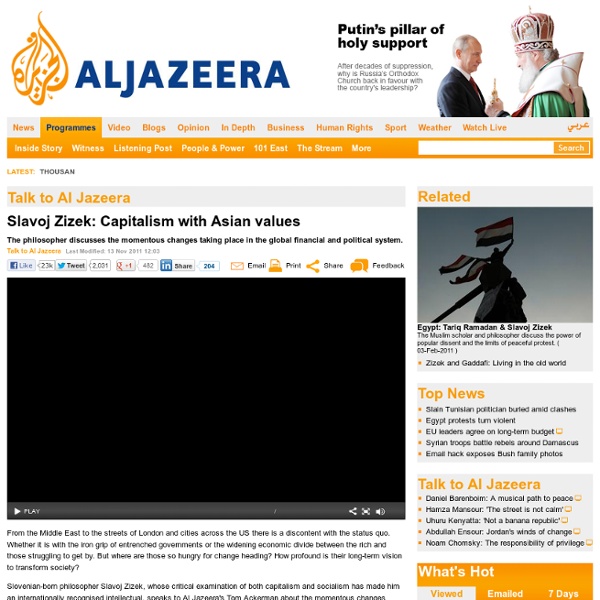 From the Middle East to the streets of London and cities across the US there is a discontent with the status quo. Whether it is with the iron grip of entrenched governments or the widening economic divide between the rich and those struggling to get by. But where are those so hungry for change heading? How profound is their long-term vision to transform society? Slovenian-born philosopher Slavoj Zizek, whose critical examination of both capitalism and socialism has made him an internationally recognised intellectual, speaks to Al Jazeera's Tom Ackerman about the momentous changes taking place in the global financial and political system. In his distinct and colourful manner, he analyses the Arab Spring, the eurozone crisis, the "Occupy Wall Street" movement and the rise of China. Slavoj Zizek's latest book is Living in the End Times (Verso).

Slavoj Žižek "Žižek" and "Zizek" redirect here. For the biographical documentary film, see Zizek!. Slavoj Žižek (Slovene pronunciation: [ˈslavoj ˈʒiʒɛk] ( Occupy Wall Street's Greatest Strength Is Neutering It - Conor Friedersdorf - Politics Attacking a symbol made the protest movement powerful, provoked a backlash, and made reform an unlikely outcome In the Joan Didion essay "Goodbye to All That," the California born writer observes that it is not possible for people in the East to appreciate what New York City means to other Americans. "To an Eastern child, particularly a child who has always had an uncle on Wall Street and who has spent several hundred Saturdays first at F.A.O. Schwarz and being fitted for shoes at Best's and then waiting under the Biltmore clock and dancing to Lester Lanin, New York is just a city, albeit the city, a plausible place for people to live," she writes.

92% Of Americans Are Socialists They Just Don't Know It Wealth inequality is as extreme today as it was during the Great Depression years. In real terms, the wealthy hold the majority of this nation’s wealth and income. The problem in this country is mass disillusionment. In a recent study by Duke and Harvard University they found many Americans believe that the top 20% of our nation’s wealthiest own 60% of the wealth. The real figure is the top 20% own 84% of our nation’s wealth and it is increasing every year.

Professor of Philosophy and Psychoanalysis - Videos ?Slavoj Žižek, philosopher and author, in a friendly debate with students on ontology and politics in relation to Alain Badiou's philosophy. In this lecture Slavoj Žižek discusses the status of the subject, transcendental phenomenal existence, the difference between act and Event, the necessity of terror, Christianity, Saint Paul, inconsistency of the big Other, the communist hypothesis and political nomination in relationship to Jacques Lacan, Alain Badiou, Alenka Zupan?

Protest Like an Egyptian: An Occupation of Wall Street On Oct. 1, Occupy Wall Street protesters marched onto the Brooklyn Bridge. The protesters, along with several of the country's largest worker's unions, are planning an even larger march on Oct. 5. AP/Stephanie Keith. On Oct. 1, the two-week anniversary of the Occupy Wall Street protest, 700 protesters and one New York Times reporter were arrested in the middle of the Brooklyn Bridge. Many other protesters marched over the pedestrian pathway and were not arrested. “Those who took over the Brooklyn-bound roadway, and impeded vehicle traffic, were arrested,” said Paul Browne, chief spokesperson for the NYPD. Notes Toward A New Political Taxonomy It has become clear to me over the years that one of the causes of persistent confusion in our political arguments is the interchangeable use of taxonomic terms that, while they may have a natural affinity, are not actually synonyms. Three terms that tend to get used interchangeably are: Left Liberal Progressive Their counterparts on the other side of the political spectrum are treated similarly: Right Conservative Reactionary

Aaron Peeters: The movement that needs no name Keith Kahn-Harris recently wrote about the genesis of a movement that is currently underway and represents no less than a “...spectre ...haunting the early 21st century world”. Kahn-Harris observes that this movement possesses the ability to radically transform the world as we know it, and yet he notes, it does not yet recognize itself as a movement. The 'Movement' and the Twilight of Neo-Liberalism: I agree with many of the basic propostions put forward in Naming the Movement, most notably the fact that we are seeing increased discontent in the OECD (read 'Western') countries with a world where social relations and civic institutions are entirely subordinate to profit and economic returns, “...the movement is born out of a sense of frustration (explicit or implicit by turn) with the tendency of the contemporary world to fragment communities, to make education into a purely instrumental exercise, to accord everything a measurable price.

Their Own Worst Enemies by Dominic Holden - Seattle News N o sooner had six panelists finished opening remarks last Saturday evening than a woman scampered onstage and yelled, "Mic check!" It was an orchestrated effort by several dozen Occupy Seattle activists to use the "People's Mic" to interrupt a forum at Town Hall—a forum in favor of Occupy Wall Street, featuring three wonks and three activists from Occupy Seattle. Their stunt replaced what was supposed to be an informed discussion with an uninformative shoutathon about process that consumed most of the evening.

Goldman Sachs to Employees: Avoid Occupy Wall Street - US Business Blog Goldman headquarters is at 200 West Street in New York City is just about 1,000 yards from the park where protesters have been encamped since Sept. 17. Until recently, it was possible to see the square from some offices in Goldman’s headquarters. Recent construction has blocked the view. “I was going to come down to say hello yesterday,” one of my Goldman sources wrote to me on Wednesday. Occupy Atlanta encamps on lawn of house under foreclosure threat An Atlanta police officer sent an email to Occupy Atlanta protesters asking for help with his house, which is under threat of foreclosure (when the family tried to refinance their mortgage, the bank responded with a foreclosure notice). Dozens of Atlanta occupiers shifted their camp to the house's lawn, erecting "This home is occupied" signs and promising to put their bodies between the house and the sheriff's deputies when the eviction comes. The neighbors are highly supportive.

Liste des livres, films et articles par Slavoj Žižek Un article de Wikipédia, l'encyclopédie libre. Liste de livres, articles et films écrits ou réalisés par Slavoj Žižek. Livres[modifier | modifier le code] En français[modifier | modifier le code] En anglais[modifier | modifier le code] Occupy Wall Street: A Guided Tour NEW YORK — Although the unseasonably warm weather has been favorable to Occupy Wall Street protesters who have set up shop in Zuccotti Park, the logistics and potential problems of living in a public space are not lost on the occupiers. Early concerns about basic needs and safety for the demonstrators quickly spawned a democratic system to provide resources for those on the ground who need them. A Tour Of Occupy Wall Street Colin Harris-Mctigue, a volunteer organizer and coordinator of the outreach program for Occupy Wall Street, has been frequenting the park (now deemed "Liberty Park" by protesters) since the movement's first day, on September 17. "There was a loose conglomeration of people, and no one really had any idea of what was going on," Harris-Mctigue explained of the early days on the ground.

"The system has lost its self-evidence! Its self legitimacy! by marianapal Jan 23