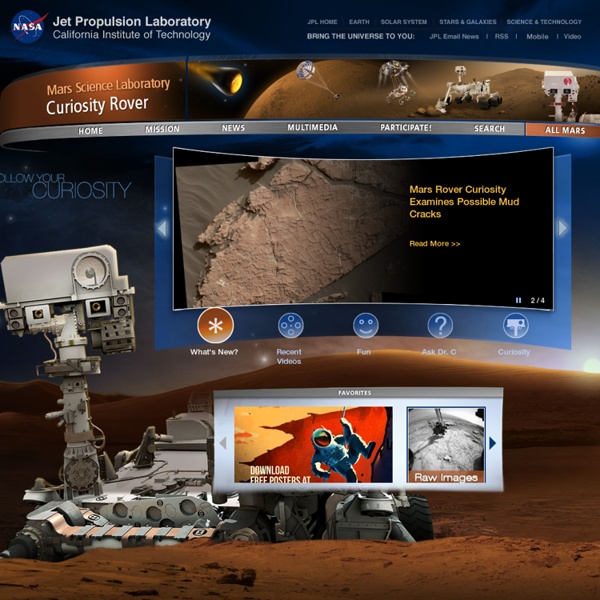 Fun Send a Postcard to Curiosity - 08/06/2013 Celebrate Curiosity's second year on Mars by sending the rover and the team a message.Send Postcard >> Mars in The Palm of Your Hands Curiosity's Mission Enjoy this slideshow about Curiosity's mission: To see if Mars ever had the right conditions to support life! Learn About The Rover Curiosity's parts are similar to what a human would need to explore Mars (body, brains, eyes, arm, legs, etc.). Landing On Mars Curiosity NEW: Curiosity Updates from Science Team Members Where is Curiosity? See a map of Curiosity's current location and check out the mission clock, which tells you how many days Curiosity has been on Mars.More >> See the Latest Raw Images - 07/16/2014 Follow Curiosity's Journey Follow Curiosity's path with the latest traverse info and daily weather data. Curiosity Scientific Data

Mars rover Curiosity lands, NASA releases new image and video: ‘The surface mission of Curiosity has now begun’ - Ideas@Innovations 8:23 p.m. - NASA releases short video of Mars rover descent We discovered via io9 this video of the Mars rover Curiosity making its way toward the surface of Mars. The thumbnail images in sequence and taken by the Mars Descent Imager (MARDI) show the rover in the last two-and-a-half minutes of Curiosity’s descent to Mars: 1:13: News briefing ends! The news briefing is over. We’ll have a couple more updates with the photos that were passed down.

Meet the thousands of people ready to die on Mars Aaron Hamm, an assistant hotel engineer who deals with HVAC, cooling systems, and maintenance, lacks the traditional qualifications to be an astronaut. But that doesn't mean he wants to stay on Earth. "I felt… I was discouraged as a child [from becoming an astronaut] just because of how unbelievably competitive it is,” Hamm told Ars. “I’m a very intelligent person and I’m driven to try and achieve my dreams but, at the same time, I felt like it was an really unrealistic goal to try and pursue. As smart as I am, there's always plenty of people that are smarter.” Hamm, an Ars forum user by the name of Quisquis, has just applied for the private Mars One colony program.

Dyson Spheres: The Ultimate Energy Shell Game The world’s exponential population growth will soon need to flatten out otherwise within a few hundred years every square foot of the Earth’s surface will be taken up by a human. (Which reminds me of one of my favorite bumper stickers from a space advocacy group in the 1970s that read: “American Needs Space to Grow.”) With this population growth, mankind’s hunger for energy has also increased exponentially. And if this continues, we will soon consume more energy than the Earth receives from the sun. Should they exist, this could be a common problem faced by burgeoning civilizations across the galaxy.

Discover an exoplanet : the transit method Unveil an extrasolar planet by observing the light intensity emitted by its mother star An extrasolar planet, or exoplanet, is a planet outside the Solar System. Until March 2012, astronomers have made detections of 762 exoplanets (see for a complete and detailed catalog). The vast majority of them has been observed through radial velocity and transit observations but other indirect methods also exist : astrometry, microlensing and timing among them.