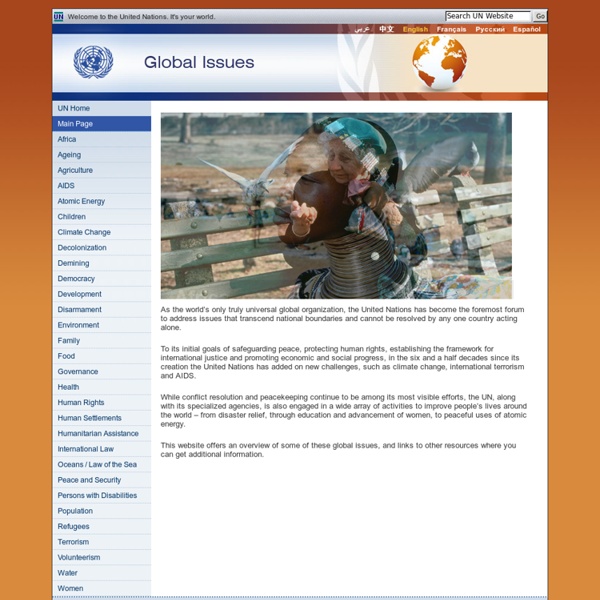 Africa As the world’s only truly universal global organization, the United Nations has become the foremost forum to address issues that transcend national boundaries and cannot be resolved by any one country acting alone. To its initial goals of safeguarding peace, protecting human rights, establishing the framework for international justice and promoting economic and social progress, in the six and a half decades since its creation the United Nations has added on new challenges, such as climate change, international terrorism and AIDS. While conflict resolution and peacekeeping continue to be among its most visible efforts, the UN, along with its specialized agencies, is also engaged in a wide array of activities to improve people’s lives around the world – from disaster relief, through education and advancement of women, to peaceful uses of atomic energy. This website offers an overview of some of these global issues, and links to other resources where you can get additional information. Related:  Eurasia Oceania • Video / Documentary

Freedom in the World 2010 Global Erosion of Freedom For the fourth consecutive year, global declines in freedom outweighed gains in 2009, as measured by Freedom House’s annual survey of political rights and civil liberties, Freedom in the World 2010. This represents the longest continuous period of decline for global freedom in the nearly 40-year history of the report. In a year marked by intensified repression against human rights defenders and civic activists, declines for freedom were registered in 40 countries in Africa, Latin America, the Middle East, and the former Soviet Union, representing 20 percent of the world’s total polities. Authoritarian states including Iran, Russia, Venezuela, and Vietnam became more repressive. “The news for 2009 is cause for real concern,” said Arch Puddington, Freedom House Director of Research. In this year’s findings, five countries moved into Not Free status, and the number of electoral democracies declined to the lowest level since 1995.

Global Issues : social, political, economic and environmental issues that affect us all :: Download Free Political Documentaries And Watch Many Interesting, Controversial Free Documentary Films On That You Wont Find On The TV! :: Watch Free Documentaries Online | Documentary Heaven Country Studies - Federal Research Division, Library of Congress This Web site contains the online versions of 80 books previously published in hard copy by the Federal Research Division of the Library of Congress as part of the Country Studies/Area Handbook Series. This effort was sponsored by the U.S. Department of the Army from 1986 to 1998, but Army funding ended in the late 1990s, and the program lapsed. The Country Studies Series was originally intended to focus primarily on lesser-known areas of the world or regions in which U.S. forces might be deployed and thus is not all-inclusive. Intended for a general audience, the books in the series present a comprehensive description and analysis of the historical setting and the social, economic, political, and national security systems and institutions of select countries throughout the world. With the exception of some photographs, clearly marked in photograph captions, the contents of the Country Studies are not copyrighted, and permission is not required to use them.

Free Documentaries Online The World Factbook People from nearly every country share information with CIA, and new individuals contact us daily. If you have information you think might interest CIA due to our foreign intelligence collection mission, there are many ways to reach us. If you know of an imminent threat to a location inside the U.S., immediately contact your local law enforcement or FBI Field Office. For threats outside the U.S., contact CIA or go to a U.S. Embassy or Consulate and ask for the information to be passed to a U.S. official. Please know, CIA does not engage in law enforcement. In addition to the options below, individuals contact CIA in a variety of creative ways. If you feel it is safe, consider providing these details with your submission: Your full name Biographic details, such as a photograph of yourself, and a copy of the biographic page of your passport How you got the information you want to share with CIA How to contact you, including your home address and phone number

Documentary Film Network Open Culture Governments: The World Factbook The Office of Public Affairs (OPA) is the single point of contact for all inquiries about the Central Intelligence Agency (CIA). We read every letter, fax, or e-mail we receive, and we will convey your comments to CIA officials outside OPA as appropriate. However, with limited staff and resources, we simply cannot respond to all who write to us. Contact Information Submit questions or comments online By postal mail: Central Intelligence Agency Office of Public Affairs Washington, D.C. 20505 By phone:(703) 482-0623Open during normal business hours. By fax:(571) 204-3800(please include a phone number where we may call you) Contact the Office of Inspector General Contact the Employment Verification Office Before contacting us: Please check our site map, search feature, or our site navigation on the left to locate the information you seek.