The 6 Most Mind-Blowing Things Ever Discovered in Space 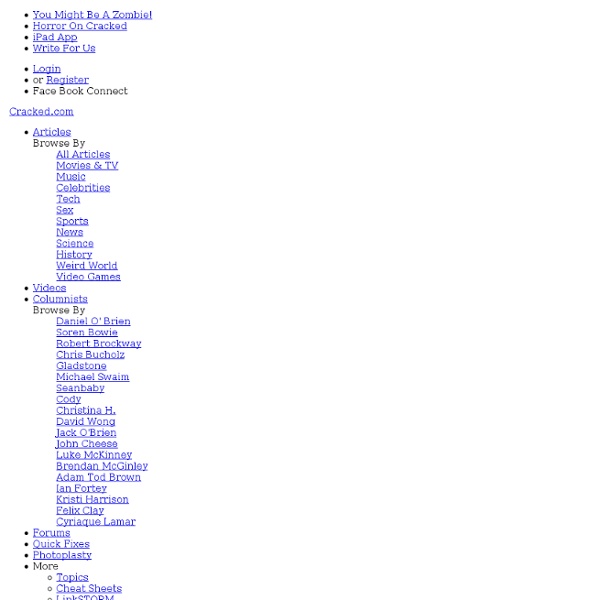 It's actually really easy to think of space as boring. The planets in our own solar system all seem to be empty rocks or balls of gas, and you find a whole lot of nothing before you get to the next star. Meanwhile, Hollywood's most creative minds can't get past populating the place with planets that look a whole lot like Earth (and specifically, parts of California) featuring monsters, rapey aliens or Muppets. But real space is far, far stranger. #6. Science fiction writers have this annoying thing they do where they can only think of like five different types of planets. But scientists have studied almost 700 real planets outside the solar system, and some of them are downright gaudy. Via Inewp.comIt's a wedding gem worthy of Jesus or the Sultan of Dubai. How Is This Even Possible? The universe's biggest showoff actually used to be a star, and sometimes the debris that's left over after the star dies starts a second career as a planet. Via Spaceflightnow.comWhat a dick! #5. #4. Wrong!

Announces Results of Epic Space-Time Experiment NASA Announces Results of Epic Space-Time Experiment May 4, 2011: Einstein was right again. There is a space-time vortex around Earth, and its shape precisely matches the predictions of Einstein's theory of gravity. Researchers confirmed these points at a press conference today at NASA headquarters where they announced the long-awaited results of Gravity Probe B (GP-B). "The space-time around Earth appears to be distorted just as general relativity predicts," says Stanford University physicist Francis Everitt, principal investigator of the Gravity Probe B mission. "This is an epic result," adds Clifford Will of Washington University in St. Time and space, according to Einstein's theories of relativity, are woven together, forming a four-dimensional fabric called "space-time." If Earth were stationary, that would be the end of the story. The idea behind the experiment is simple: In practice, the experiment is tremendously difficult. Pulling off the experiment was an exceptional challenge.

Waiting For New Universes : 13.7: Cosmos And Culture How long is long enough when it comes to waiting for a new cosmology? How long will scientists, and everyone else, wait for an exciting but speculative theory to find some basis in experiment? Sean Carroll's new column in Discover Magazine recently made its debut with a wonderful piece on the multiverse (a longer explanation of the ideas also appears here). If you have never heard the term before, the multiverse is a universe of universes. It's the idea that beyond the universe we can see (via light that has been traveling towards us for the last 13.7 billion years), lie other entirely distinct "pocket universes," each with their own histories and even their own laws of physics. The multiverse has become a popular topic in cosmological circles. Now don't get me wrong, I would love for the multiverse to exist. This debate about science turning from the universe we can observe to potential or implied universes we can't has heated up over the last decade.

The 2011 Astronomy Photographer of the Year competition winners Amateur astronomer Damian Peach has become the first British entrant to win the title of Astronomy Photographer of the Year, beating hundreds of photographers from around the globe in the 2011 competition. As well as securing the £1,500 top prize, his image takes pride of place in the exhibition of winning photographs opening at the Royal Observatory Greenwich on 9 September 2011. Competition for the 2011 prize was fierce with more pictures received than ever before; over 700 entries from all around the world. For more information see www.nmm.ac.uk/visit/exhibitions/astronomy-photographer-of-the-year/ Above: OUR SOLAR SYSTEM category winner and Overall Winner: Jupiter with Io and Ganymede, September 2010 by Damian Peach (UK). Picture: Damian Peach

Welcome to the Multiverse | Cosmology Theoretical cosmologist isn’t one of the more hazardous occupations of the modern world. The big risks include jet lag, caffeine overdose, and possibly carpal tunnel syndrome. It wasn’t always so. On February 17, 1600, Giordano Bruno, a mathematician and Dominican friar, was stripped naked and driven through the streets of Rome. Then he was tied to a stake in the Campo de’ Fiori and burned to death. The records of Bruno’s long prosecution by the Inquisition have been lost, but one of his major heresies was cosmological. These days, cosmologists like me may be safer, but our ideas have grown only more radical. Also like Bruno, cosmologists are reaching far beyond what observational evidence can tell them. The extent of what astronomers can see is frustratingly limited by the speed of light: one light-year (about six trillion miles) per year. Obviously, we don’t know what the unobservable part of the universe looks like. That’s where the multiverse comes from.

Graphene in space could hold clues to development of life on Earth An artist's concept of graphene, buckyballs and C70 superimposed on an image of the Helix planetary nebula (Image: IAC/NASA/NOAO/ESA/STScI/NRAO) Human beings may have only discovered how to create the one-atom-thick sheets of carbon atoms known as graphene in 2004 but it appears the universe could have been churning out the stuff since much earlier than that. While not conclusive proof its existence in space, NASA's Spitzer Space Telescope has identified the signature of graphene in two small galaxies outside our own. If confirmed, it would be the first-ever cosmic detection of the material and could hold clues to how carbon-based life forms such as ourselves developed. The infrared-sensing Spitzer telescope identified signs of graphene in planetary nebulae - the material shed by dying stars - within the Magellanic Clouds galaxies that orbit our Milky Way galaxy. Spitzer first definitively detected the presence of both buckyballs and C70 in space in July 2010. Source: NASA.

Monster Storm Rages on Tiny Misfit Star | Brown Dwarf & Alien Planet Weather | Strongest Storm on an Alien World A small, dim star appears to be wracked by a mega storm more violent than any weather yet seen on another world, astronomers announced. The star, called a brown dwarf, is more massive than a giant planet but much lighter than most stars. Over a period of several hours, the star exhibited the largest brightness variations ever seen on a cool brown dwarf. "We found that our target's brightness changed by a whopping 30 percent in just under eight hours," graduate student Jacqueline Radigan of the University of Toronto said in a statement. Radigan will present a paper on the findings this week at the Extreme Solar Systems II conference in Jackson Hole, Wyoming. Scientists think climate patterns on brown dwarfs are similar to those on giant planets, so studying this super squall could help illuminate weather on alien planets. The researchers observed the star, called 2MASS J21392676+0220226, using the infrared camera on the 2.5-meter telescope at Las Campanas Observatory in Chile.

Home CERN Love » train Sorry about all the silence the last couple weeks. These days our day jobs are getting pretty busy. Beam dump at Point 6 After the question “what is 7 TeV?” came up in the comments on our imminent collisions post I though it would be fun to take a tour of some common quantities in energy physics. All of this appears in other sources such as “LHC: The Guide” (2008) and, many talks such as “LHC Status and Commission Plans”. First of all, let’s stay humble. 27 km in circumference,100 m underground,8 stories high,12,500 tons, etc. But all this huge equipment is just support for the diminutive stars: bunches of 1011 protons,each 7 cm long and 1 mm in diameter (about the size of a mechanical pencil lead). That really isn’t much stuff considering that macroscopic things contain around 1023 atoms. So, what about this 7 TeV thing? A TeV is actually a very tiny amount of energy. On the other hand, we have to give these protons some credit. So, to the energies…

Double eclipse: Moment Moon AND International Space Station cross face of Sun By Daily Mail Reporter Updated: 20:58 GMT, 5 January 2011 Britons were only offered a clouded view of yesterday's partial solar eclipse owing to our typically dreary weather. But one lucky skywatcher in south-west Asia managed to catch a doubly striking glimpse of the natural phenomenon. After some careful calculations, photographer Thierry Legault decided to travel to just outside Oman's capital city of Muscat, where he knew he could catch both the Moon and the International Space Station briefly crossing the Sun. Photographer Thierry Legault captured both the Moon and the International Space Station (circled) crossing the face of the Sun His margin of error was miniscule since the space station sped across the face of our solar system's star in less than a second. However, Mr Legault's 1/5000th second exposure managed to perfectly capture Earth's two largest satellites against the glowing yellow backdrop.

Interactive 3D model of Solar System Planets and Night Sky Existence: Why is the universe just right for us? - space - 29 July 2011 Read more: "Existence special: Cosmic mysteries, human questions" IT HAS been called the Goldilocks paradox. If the strong nuclear force which glues atomic nuclei together were only a few per cent stronger than it is, stars like the sun would exhaust their hydrogen fuel in less than a second. Our sun would have exploded long ago and there would be no life on Earth. If gravity were a little weaker than it is, it would never have been able to crush the core of the sun sufficiently to ignite the nuclear reactions that create sunlight; a little stronger and, again, the sun would have burned all of its fuel billions of years ago. Such ...

NASA probe offers new view of Mercury: an alien world right in our back yard Now, after poring over 100,000 images and reams of other Messenger data, space scientists have achieved consensus: Mercury is one weird world. It is radically unlike the other rocky bodies of our solar system — Venus, Mars, Earth, the moon, and the moons of other planets. Its core is too big; its surface too scrunched. “It’s been really spectacularly baffling,” said MIT’s Maria Zuber, of the Messenger data, which scientists reported on in two scientificarticles and 57 presentations at the annual Lunar and Planetary Science Conference last week. Mercury was long viewed as an inert lump, but Zuber and her colleagues now say it is still cooling and still shrinking, pushing up scarps — steep cliffs — that run for hundreds of miles. Massive interior forces have pushed and tilted huge stretches of the surface. “Everything is intriguing on the surface of Mercury,” said Nancy Chabot of the Applied Physics Laboratory at Johns Hopkins University, which built Messenger. ‘Back to the drawing board’