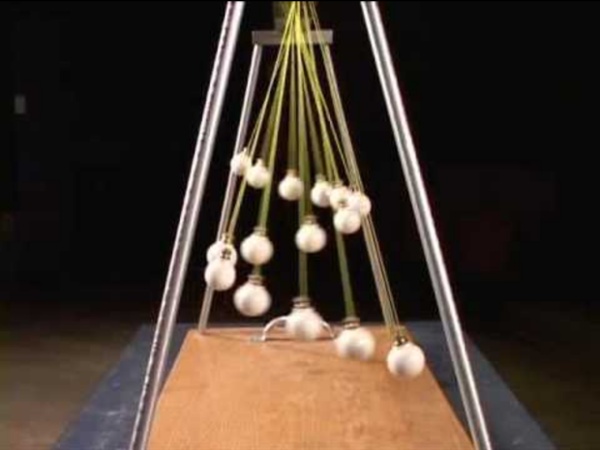 Watch this bead chain loop defy gravity and bend physics Science is unendingly cool because it can consistently confound the expectations of researcher and layman alike. Case in point, what do you figure would happen if you had a bead chain coiled up in a small container, then pulled one end out? You probably didn’t guess that it would leap up and uncoil like a tiny metallic snake, but that’s what happens. This demonstration is sometimes called Newton’s Beads.

Most insane, brilliant video of flying human ever SENSE OF FLYING from Goovinn on Vimeo. As we ease into the weekend, anyone still stuck to choose an outdoor activity might look to the example set by Norwegian Espen Fadnes. Watching Fadnes in his wingsuit take off on an awe-inspiring 250km/hour jaunt through the mountains, you can't help but smile - not to mention wonder how anyone can screw up the requisite courage to jump off an alpine peak in bull-goose looney pursuit of what undoubtedly is one of the greatest adrenaline thrills ever. But this is getting to be old hat for Fadnes, who last year won an international competition for wingsuit flying, earning him the sobriquet of the world's fastest flying human. Inspired to try?

Students use giant balls to build omnidirectional motorcycle Riding this bike takes balls. Gigantic balls. Quite possibly the largest pair of balls you've ever seen in one place. Round wheels are out and spherical wheels are in with this project from students at San Jose State University, the end result of which will be a rideable electric motorcycle that uses balls instead of wheels. Boss Gif – Swim Like A Dolphin In The Sea, Edition! « Anguished Repose "My friend.--Welcome to the Carpathians. I am anxiously expecting you. Sleep well tonight. At three tomorrow the diligence will start for Bukovina; a place on it is kept for you. At the Borgo Pass my carriage will await you and will bring you to me.