Manchester Graphene (The University of Manchester) 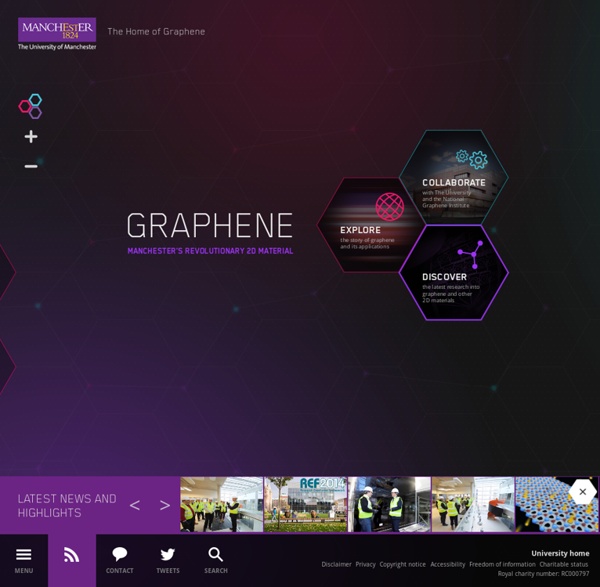 Damaged graphene surfaces 'heal spontaneously' if torn Graphene has long-been touted as a miracle substance, one which -- if we master it -- we could use to construct almost anything our imaginations can conceive, from quantum computers to space elevators. The problem, though, is mastering it, because that means first understanding it -- and it looks like we've just discovered another thing about graphene we didn't really expect: It can heal itself if it gets damaged. A team of physicists at the University of Manchester, led by Nobel Prize-winner Konstantin Novoselov, has been examining graphene under an electron miscroscope to try and understand its behaviour better. Graphene sheets are only one atom thick, so it's very difficult to construct large panels of it. Because it's made of carbon, and carbon likes to bond with itself, that means sections of graphene tend to curl up into small balls. The team fired an electron beam at a graphene sheet, cutting a small hole in it, then added in atoms of palladium and nickel.

SOLAR IMPULSE - Solar Impulse 2 Whereas the prototype uses existing technologies, Solar Impulse HB-SIB requires the development of new materials and new construction methods. Solvay has invented electrolytes that allow the energy density of the batteries to be increased; Bayer MaterialScience is allowing the project to make use of its nanotechnologies; and Décision is using carbon fibers that are lighter in weight than any previously seen. The first wing spar section was delivered to Dübendorf in March 2012. However, during the final test of this central part, the structure of the wing spar succumbed to the load and broke. The initial shock soon turned out to be an opportunity: the flight around the world had to be postponed which opened the door for going to the United States and completing the epic journey across America.

The future: MakerBot’s badass 3D scanner prototype lets you replicate real-world objects MakerBot has announced a new Digitizer 3D Desktop Scanner prototype that analyzes real-world objects and generates designs compatible with its 3D printer line. A preview page for the scanner, which uses lasers and cameras to essentially create a 3D CAD model, is up on the MakerBot site, but the project is still in prototype stage, so it’s likely going to be a while before this thing is released. “We are super excited to be able to announce at SXSW Interactive that we are developing the MakerBot Digitizer Desktop 3D Scanner,” MakerBot CEO Bre Pettis said in a statement. Pettis went on to note that “archiving, prototyping, replicating, and digitizing prototypes, models, parts, artifacts, artwork, sculptures, clay figures, jewelry, etc.” are all possible uses for the scanner. “If something gets broken, you can print it again,” he said. 3D printing is already pretty futuristic stuff, and this brings MakerBot’s plans for another industrial revolution closer to reality.

Manchester Graphene (The University of Manchester) Graphene is a fascinating material with many potential applications that stem from its unusual properties. It was thought not to be stable in its free form until it was isolated in 2004 by researchers at The University of Manchester. This is the story of how that discovery came about and why the researchers involved won the Nobel Prize in physics for their work. If we stack layers of graphene on top of one another they form graphite, which is found in every pencil lead. In fact anyone who has drawn a line with a pencil has probably made some graphene. It was first studied as a limiting case for theoretical work on graphite by Phillip Wallace as long ago as 1947. The term has also been used extensively in the work on carbon nanotubes which are effectively rolled up graphene sheets. The work at Manchester begins Andre Geim Kostya Novoselov A willing volunteer Kostya volunteered to look at how thin the graphite flakes on the tape could be made. The 2010 Nobel Prize for Physics

learn morse code Berkeley creates the first graphene earphones, and (unsurprisingly) they’re awesome Researchers at the University of California, Berkeley have created the first ever graphene audio speaker: an earphone. In its raw state, without any kind of optimization, the researchers show that graphene’s superior physical and electrical properties allow for an earphone with frequency response comparable to or better than a pair of commercial Sennheiser earphones. A loudspeaker (or earphone or headphone) works by vibrating a (usually) paper diaphragm (aka a cone), creating pressure waves in the air around you. Depending on the frequency of these waves, different sounds are created. In Berkeley’s graphene earphone, the diaphragm is made from a 30nm-thick, 7mm-wide sheet of graphene. Graphene earphone frequency response (top), vs. Given graphene’s status as a wonder material we shouldn’t really be surprised, but it turns out that this graphene speaker — the first of its kind — has intrinsically excellent performance.

atlantiksolar | A UAV for the first-ever autonomous solar-powered crossing of the Atlantic Ocean Graphene's first commercial use will be in flexible touchscreens - Indium tin oxide a goner With the rapid advances made in that wonder material graphene, what we want to know is when we will see it in widespread commercial use for the first time. It seems that the front runner for the first wide adoption could be in transparent flexible touchscreens. A team of researchers has made further steps towards this with the development of a hybrid graphene film. The research team, headed up by James Tour, wants to replace indium tin oxide (ITO) which is used in most flat panel displays, meaning smartphones, tablets, solar cells and more. Graphene offers advantages over ITO, a brittle material - as anyone who has dropped their cracked their screens can agree. Graphene is significantly more flexible, and could form the basis for wearable, transparent computers. In economic terms, indium is increasingly in demand, meaning that the price of the rare material has grown over the years. This means the material can potentially be bent thousands of times without damage.

UCL Hazard Centre Collecting Lava Samples on Kilauea, Hawaii Pyroclastic Flow at Montserrat Novarupta Dome, Katmai National Park, Alaska Communities at risk from coastal flooding and storm surge, Albay Province Sakurajima eruption 21st July 2013 The UHC at University College London (UCL) is one of Europe’s leading multidisciplinary academic centres for hazard and risk research, education and knowledge exchange. The UHC is always interested to hear from those aiming to integrate scientific knowledge and research into their risk reduction and natural resource management programmes. Government announces £50m funding hub for UK graphene research The miracle material graphene -- those ultra-strong atom-thick carbon nanosheets which could be used in everything from solar panels to aircraft wings -- has received a substantial investment from the UK government. During the Conservative Party Conference, the Chancellor of the Exchequer, George Osborne, announced a £50 million Graphene Global Research and Technology Hub, which will fund researchers with the aim of developing new devices and technologies that work with the material. The idea is that those new ideas can then be commercialised and sold. The funds will be made available in the coming weeks, and then universities and research labs around the country which are working with graphene -- like the University of Manchester -- will get to bid on the £50-million prize bucket. Manchester is the birthplace of graphene, as Andre Geim and Konstantin Novoselo first extracted the single-atom-thick crystallites of graphene from bulk graphite in 2004, at the city's university.