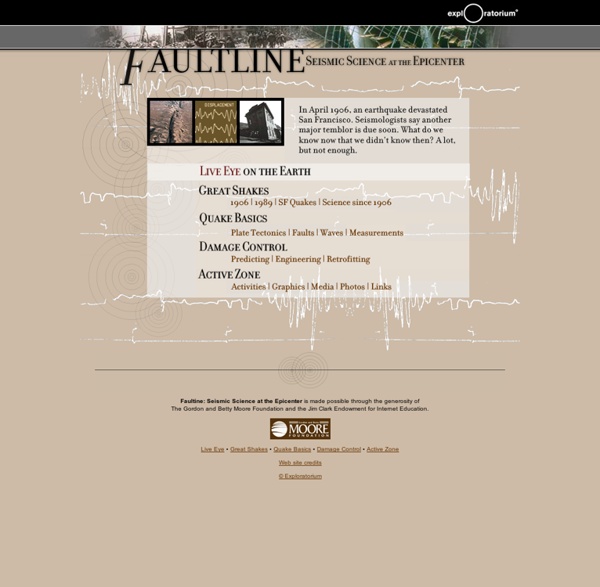 Related:  Waves and Their Applications for Energy Transfer

Modeling Earthquake Waves | Earth Science Week An earthquake occurs when massive rock layers slide past each other. This motion makes enormous vibrations, which travel from the site of the earthquake in waves. The waves (seismic waves) travel all the way through the Earth. Seismologists can record these waves when they reach Earth’s surface using seismographs. Earthquakes generate three kinds of waves: Compressional waves (P waves) travel the fastest. Materials Two Slinkys™Flat, smooth surfaceNotebook and penSafety goggles Procedure Work with a partner. Sound Uncovered: An Interactive Book for the iPad Explore the surprising side of sound with Sound Uncovered, an award-winning interactive collection from the Exploratorium featuring auditory illusions, acoustic phenomena, and other things that go bump, beep, boom, and vroom. Hear with your eyes, see with your ears, test your hearing, make and modify recordings—this app puts you at the center of the experiment. Why do some noises seem louder at night? And it's free! Sound Uncovered won the Jackson Hole Science Media Symposium's 2014 Best Online and Interactive Media Award; the American Association of Museum's 2013 Silver MUSE award, Mobile Applications; and Museum and the Web's 2013 Best of the Web Award, Mobile.

Lesson Plans On Sound And Acoustics For Grades 4 Through 6 Acoustics is the study of the properties of sound and how sound is transmitted through space. Engineers working on airplane design pay close attention to the acoustics of the airplane cabin in an effort to keep passengers as comfortable as possible. In this module, students develop, test, and modify designs for a quieter airplane cabin. Students develop a conceptual understanding of science ideas related to sound waves. NGSS addressed by this module: MS-ETS1-1 MS-ETS1-4 MS-PS4-1 MS-PS4-2 MS-LS1-8 Grade Band: 4-8 Download the Lessons Entire Unit: Quieter Cabin DAYS 1–10: Quieter Cabin Teacher Handbook Download DAYS 1 & 2: How Sound Travels Away from an Airplane Engine Students are introduced to the design problem of creating a quieter cabin for airplane passengers. DAY 3: Shake, Rattle, and Roll (Optional Extension) Students further explore the idea that energy can flow from one form to another as they continue to build their understanding of sound generation and transmission.

New Tech Could Read Books Without Opening Them Using technology akin to X-ray vision, scientists can read closed books, identifying letters printed on stacks of paper up to nine sheets thick. This finding could lead to office machines that can scan reams of paper at once, or help researchers scan ancient books that are too fragile to open. The researchers also said it could perhaps help spies read mail without opening envelopes. The prototype device uses terahertz radiation, the band of electromagnetic radiation between microwaves and infrared light. Previous research has found that terahertz rays, or T-rays, possess a number of advantages over X-rays, ultrasound waves and other kinds of radiation that can penetrate surfaces. The new system relies on how different chemicals absorb different frequencies of terahertz radiation to varying degrees, the scientists said. Moreover, the new system exploits the fact that air and paper each bend light to a different degree, and that pages of a book trap air pockets between them.

Related:
Related:  Waves and Their Applications for Energy Transfer