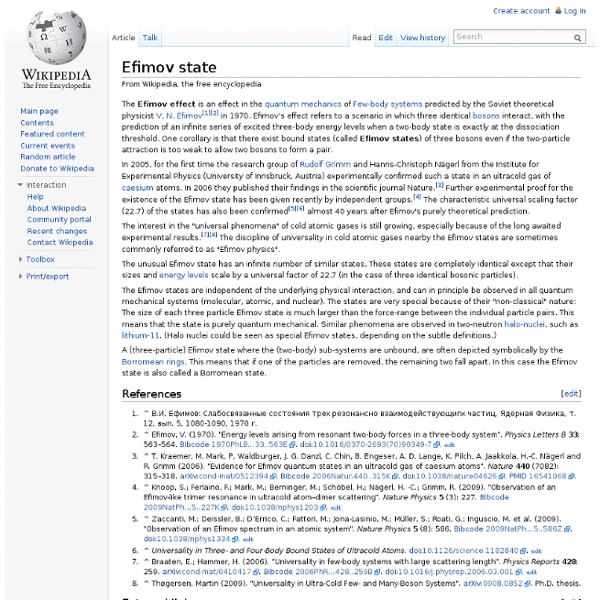 The Efimov effect is an effect in the quantum mechanics of Few-body systems predicted by the Russian theoretical physicist V. N. Efimov[1][2] in 1970. Efimov’s effect refers to a scenario in which three identical bosons interact, with the prediction of an infinite series of excited three-body energy levels when a two-body state is exactly at the dissociation threshold. One corollary is that there exist bound states (called Efimov states) of three bosons even if the two-particle attraction is too weak to allow two bosons to form a pair. A (three-particle) Efimov state where the (two-body) sub-systems are unbound, are often depicted symbolically by the Borromean rings. The unusual Efimov state has an infinite number of similar states. In 2005, for the first time the research group of Rudolf Grimm and Hanns-Christoph Nägerl from the Institute for Experimental Physics (University of Innsbruck, Austria) experimentally confirmed such a state in an ultracold gas of caesium atoms.

Mass gap In quantum field theory, the mass gap is the difference in energy between the vacuum and the next lowest energy state. The energy of the vacuum is zero by definition, and assuming that all energy states can be thought of as particles in plane-waves, the mass gap is the mass of the lightest particle. Since exact energy eigenstates are infinitely spread out and are therefore usually excluded from a formal mathematical description, a stronger definition is that the mass gap is the greatest lower bound of the energy of any state which is orthogonal to the vacuum. Mathematical definitions[edit] For a given real field with being the lowest energy value in the spectrum of the Hamiltonian and thus the mass gap. with the constant being finite. Examples from classical theories[edit] An example of mass gap arising for massless theories, already at the classical level, can be seen in spontaneous breaking of symmetry or Higgs mechanism. This equation has the exact solution —where and being References[edit]

Amplituhedron An amplituhedron is a geometric structure that enables simplified calculation of particle interactions in some quantum field theories. In planar N = 4 supersymmetric Yang–Mills theory, an amplituhedron is defined as a mathematical space known as the positive Grassmannian. The connection between the amplituhedron and scattering amplitudes is at present a conjecture that has passed many non-trivial checks, including an understanding of how locality and unitarity arise as consequences of positivity. Research has been led by Nima Arkani-Hamed. Edward Witten described the work as “very unexpected" and said that "it is difficult to guess what will happen or what the lessons will turn out to be Description[edit] Using twistor theory, BCFW recursion relations involved in the scattering process may be represented as a small number of twistor diagrams. Implications[edit] See also[edit] References[edit] Notes[edit] Bibliography[edit] External links[edit]

Quantum spacetime In mathematical physics, the concept of quantum spacetime is a generalization of the usual concept of spacetime in which some variables that ordinarily commute are assumed not to commute and form a different Lie algebra. The choice of that algebra still varies from theory to theory. As a result of this change some variables that are usually continuous may become discrete. Often only such discrete variables are called "quantized"; usage varies. The idea of quantum spacetime was proposed in the early days of quantum theory by Heisenberg and Ivanenko as a way to eliminate infinities from quantum field theory. The germ of the idea passed from Heisenberg to Rudolf Peierls, who noted that electrons in a magnetic field can be regarded as moving in a quantum space-time, and to Robert Oppenheimer, who carried it to Hartland Snyder, who published the first concrete example.[1] Snyder's Lie algebra was made simple by C. The Lie algebra should be semisimple (Yang, I. for the spatial variables . .

Planck constant Plaque at the Humboldt University of Berlin: "Max Planck, discoverer of the elementary quantum of action h, taught in this building from 1889 to 1928." In 1905 the value (E), the energy of a charged atomic oscillator, was theoretically associated with the energy of the electromagnetic wave itself, representing the minimum amount of energy required to form an electromagnetic field (a "quantum"). Further investigation of quanta revealed behaviour associated with an independent unit ("particle") as opposed to an electromagnetic wave and was eventually given the term photon. The Planck relation now describes the energy of each photon in terms of the photon's frequency. This energy is extremely small in terms of ordinary experience. Since the frequency , wavelength λ, and speed of light c are related by λν = c, the Planck relation for a photon can also be expressed as The above equation leads to another relationship involving the Planck constant. Value[edit] Significance of the value[edit]

Yang–Mills existence and mass gap In mathematical physics, the Yang–Mills existence and mass gap problem is an unsolved problem and one of the seven Millennium Prize Problems defined by the Clay Mathematics Institute which has offered a prize of US$1,000,000 to the one who solves it. The problem is phrased as follows: Yang–Mills Existence and Mass Gap. Prove that for any compact simple gauge group G, a non-trivial quantum Yang–Mills theory exists on and has a mass gap Δ > 0. Existence includes establishing axiomatic properties at least as strong as those cited in Streater & Wightman (1964), Osterwalder & Schrader (1973) and Osterwalder & Schrader (1975). In this statement, Yang–Mills theory is the (non-Abelian) quantum field theory underlying the Standard Model of particle physics; is Euclidean 4-space; the mass gap Δ is the mass of the least massive particle predicted by the theory. Background[edit] See also[edit] References[edit] Arthur Jaffe and Edward Witten "Quantum Yang-Mills theory." External links[edit]