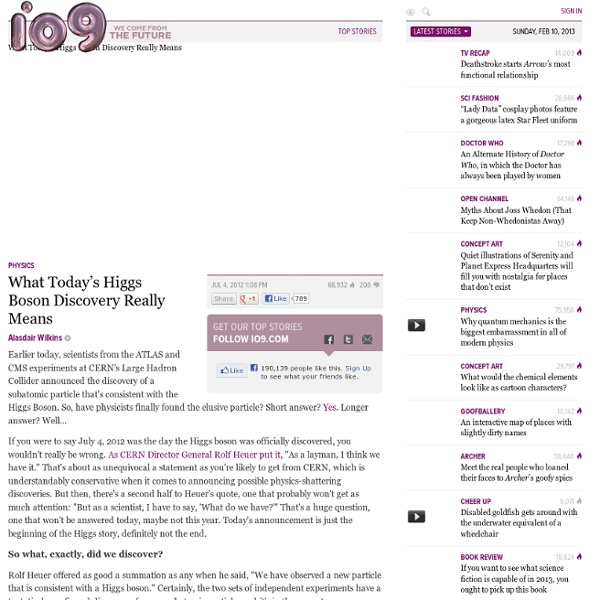 The boson series, in short and somewhat muddied recollection of the subject. Please do your own research if you want a fully accurate description, google and wikipedia are great places to start, cassiopea project has a video series on the standard model that explain it pretty well too. The term 'boson' is a concatenation of Bose-Einstein, representing physical properties which are very alien to what we normally observe. Bosons under the standard model are also force carriers, meaning these are what's responsible for the manifestation of the forces we observe in nature. Under the standard model, the mass of a (non-elementary) particle should be proportional to the amount of Higgs bosons present in that particle.

The Physics of Toilets Funny how a post about toilet physics relates so strongly to the recent wormhole show about the nature of nothing. If it weren't for natures abhorrence of the void we would be living in a world of shit. I know it's apples and oranges but what if the vacuum of space is present because of a trans-dimensional siphoning effect, and we are currently being flushed away from this space. Yes, yes, a retarded thought but a fun one none the less. My favotite movie is "This Toilet Earth" a classic sci-fi movie from the fifties about how every crap that has ever been taken is still with us.

Stop calling it "The God Particle!" "Seriously. What's wrong with you people?" You've got to be kidding me. You're having a go at the scientists for this? I have a feeling that the vast majority of physicists would've preferred that the name "God Particle" never have been coined, and would like to give Leon Lederman a slap for it... That is, in fact, the entire point of the article.

Making Saltwater Drinkable Is Graphene's Latest Miracle Scientists Invent Wonder Material That May Kill Tumors and Cure Diseases Are neutrons traveling between parallel worlds? I tended to think if there was at least one parallel world it stands to reason that there are infinite worlds. As to your first point, that may be the case. It would definitely be inconvenient, but if it's proven to be true, better start warming up the printing presses. They seem to be talking about mirror matter; that is, a gauge sector the existence of which could restore parity symmetry. So it's not a parallel universe, exactly. This is precisely correct. Conservation of mass, or, more precisely, conversation of energy, does have to be conserved in the combined normal+mirror universe. Another thing they need to match is gravity... but that's a whole different effect. :-) Thanks, that makes sense! (My physics education is extremely rusty, so it's nice to have confirmation from someone in the field.)

Fission-fusion hybrid mops up nuclear waste Two-in-one: The fusion-fission hybrid can use fusion reactions to burn nuclear waste as fuel (people are shown for scale). It could produce energy and would be used to help destroy the most toxic, long-lived waste from nuclear power. Credit: Angela Wong SYDNEY: U.S. scientists have designed a new system that they say could rid the world of radioactive waste produced by nuclear power stations, opening the door to faster, cleaner and more efficient energy production. “Many people will be willing to give nuclear [power] a chance if the waste could be destroyed,” said Prashant Valanju, a nuclear physicist from the University of Texas in Austin. Valanju is part of a team whose “waste deconstruction” scheme, reported last month in the journal Fusion Engineering and Design, proposes the use of nuclear fusion to break down the waste from existing fission power plants. Holy Grail Hybrid solution These neutrons would then be used to break apart the heavy radioactive atoms.

NASA Starts Work on Real Life Star Trek Warp Drive A Conversation With Randall Munroe, the Creator of XKCD - Megan Garber Q: What would happen if a beloved web comic created a series of ... physics explainers? Randall Munroe began his career in physics working with robots at NASA's Langley Research Center. He is famous, however, for engineering a creation of different kind: the iconic web comic that is xkcd. Last week, Munroe won the web's wonder for approximately the thousandth time when he published comic #1110, "Click and Drag," a soaring, spanning, surprising work that encouraged users to explore a fanciful world through their computer screens. As Rev Dan Catt pointed out, if you printed the comic at 300dpi, the resulting image would be about 46 feet wide. But Munroe, work-wise, is no longer dedicated exclusively to xkcd. I recently spoke with Munroe about What If, xkcd, creativity, baseballs pitched at 90 percent of the speed of light ... and how, for him, The Lord of the Rings helped lead to it all. First things first: Why did you create What If? It actually started with a class. That's it? Yeah.

The Trouble With String Theory I can certainly try. Positivism, as I understand it, is the notion that there are only three possible sources of knowledge of the universe - mathematics, logic, and direct observation. In essence, it is a radical form of empiricism. The Anthropic Principle very roughly (and according to Wikipedia) is that "observations of the physical universe must be compatible with the conscious life that observes it." Personally, I think this goes too far. The anthropic principle alone doesn't really get you much further than the basic observation that you are observing. In my view, the anthropic principle is a reminder not to make unwarranted assumptions about a set of data.

The Boy Who Played With Fusion "Propulsion," the nine-year-old says as he leads his dad through the gates of the U.S. Space and Rocket Center in Huntsville, Alabama. "I just want to see the propulsion stuff." A young woman guides their group toward a full-scale replica of the massive Saturn V rocket that brought America to the moon. Then Taylor raises his hand, not with a question but an answer. And he wants—no, he obviously needs—to tell everyone about it, about how speed relates to exhaust velocity and dynamic mass, about payload ratios, about the pros and cons of liquid versus solid fuel. As the guide runs off to fetch the center's director—You gotta see this kid! This is before Taylor would transform the family's garage into a mysterious, glow-in-the-dark cache of rocks and metals and liquids with unimaginable powers. When I meet Taylor Wilson, he is 16 and busy—far too busy, he says, to pursue a driver's license. "Where does it come from?" This is about the time any other father might have put his own foot down.

James Ziegler - SRIM & TRIM The Oh-My-God Particle by John Walker January 4, 1994 Fly's Eye The University of Utah operates a cosmic ray detector called the Fly's Eye II, situated at the Dugway Proving Ground about an hour's drive from Salt Lake City. The Fly's Eye consists of an array of telescopes which stare into the night sky and record the blue flashes which result when very high energy cosmic rays slam into the atmosphere. From the height and intensity of the flash, one can calculate the nature of the particle and its energy. On the night of October 15, 1991, the Fly's Eye detected a proton with an energy of 3.2±0.9×1020 electron volts.[1,2] By comparison, the recently-canceled Superconducting Super Collider (SSC) would have accelerated protons to an energy of 20 TeV, or 2×1013 electron volts—ten million times less. All evidence points to these extremely high energy particles being protons—the nuclei of hydrogen atoms. Microbial Mass How Fast? How fast was it going? And thus, approximately: v = 0.9999999999999999999999951 c Quicktime

How NASA might build its very first warp drive I want to see this work as much as anyone else on io9, but every time I read an article on warp drive, I expend so much mental energy trying to wrap my head around the concept that my entire left hand side goes numb. Somewhere along the line my understanding of concepts such as the nature of Spacetime is deficient. Here's the problem. If someone could point me towards some legible books that I could buy that would help me understand where my understanding has gone wrong, I would be grateful. Thanks.