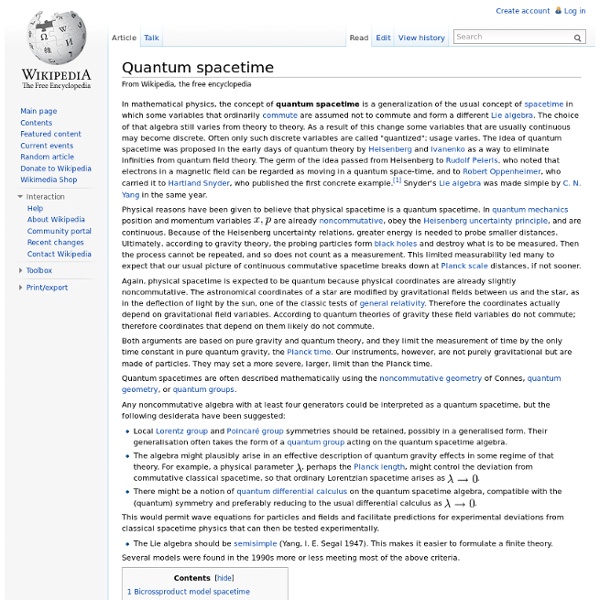 In mathematical physics, the concept of quantum spacetime is a generalization of the usual concept of spacetime in which some variables that ordinarily commute are assumed not to commute and form a different Lie algebra. The choice of that algebra still varies from theory to theory. As a result of this change some variables that are usually continuous may become discrete. Physical reasons have been given to believe that physical spacetime is a quantum spacetime. are already noncommutative, obey the Heisenberg uncertainty principle, and are continuous. Again, physical spacetime is expected to be quantum because physical coordinates are already slightly noncommutative. Both arguments are based on pure gravity and quantum theory, and they limit the measurement of time by the only time constant in pure quantum gravity, the Planck time. Quantum spacetimes are often described mathematically using the noncommutative geometry of Connes, quantum geometry, or quantum groups. and the time variable

Planck constant Plaque at the Humboldt University of Berlin: "Max Planck, discoverer of the elementary quantum of action h, taught in this building from 1889 to 1928." In 1905 the value (E), the energy of a charged atomic oscillator, was theoretically associated with the energy of the electromagnetic wave itself, representing the minimum amount of energy required to form an electromagnetic field (a "quantum"). Further investigation of quanta revealed behaviour associated with an independent unit ("particle") as opposed to an electromagnetic wave and was eventually given the term photon. The Planck relation now describes the energy of each photon in terms of the photon's frequency. This energy is extremely small in terms of ordinary experience. Since the frequency , wavelength λ, and speed of light c are related by λν = c, the Planck relation for a photon can also be expressed as The above equation leads to another relationship involving the Planck constant. Value[edit] Significance of the value[edit]

Uncertainty reigns over Heisenberg's measurement analogy A row has broken out among physicists over an analogy used by Werner Heisenberg in 1927 to make sense of his famous uncertainty principle. The analogy was largely forgotten as quantum theory became more sophisticated but has enjoyed a revival over the past decade. While several recent experiments suggest that the analogy is flawed, a team of physicists in the UK, Finland and Germany is now arguing that these experiments are not faithful to Heisenberg's original formulation. Heisenberg's uncertainty principle states that we cannot measure certain pairs of variables for a quantum object – position and momentum, say – both with arbitrary accuracy. When Heisenberg proposed the principle in 1927, he offered a simple physical picture to help it make intuitive sense. Not necessarily wrong Then in 1988 Masanao Ozawa at Nagoya University in Japan argued that Heisenberg's original relationship between error and disturbance does not represent a fundamental limit of uncertainty. Truer to Heisenberg?

Efimov state The Efimov effect is an effect in the quantum mechanics of Few-body systems predicted by the Russian theoretical physicist V. N. Efimov[1][2] in 1970. The unusual Efimov state has an infinite number of similar states. In 2005, for the first time the research group of Rudolf Grimm and Hanns-Christoph Nägerl from the Institute for Experimental Physics (University of Innsbruck, Austria) experimentally confirmed such a state in an ultracold gas of caesium atoms. The interest in the "universal phenomena" of cold atomic gases is still growing, especially because of the long awaited experimental results.[8][9] The discipline of universality in cold atomic gases nearby the Efimov states are sometimes commonly referred to as "Efimov physics". The Efimov states are independent of the underlying physical interaction, and can in principle be observed in all quantum mechanical systems (molecular, atomic, and nuclear). References[edit] Jump up ^ В.И. External links[edit]

Amplituhedron An amplituhedron is a geometric structure that enables simplified calculation of particle interactions in some quantum field theories. In planar N = 4 supersymmetric Yang–Mills theory, an amplituhedron is defined as a mathematical space known as the positive Grassmannian. The connection between the amplituhedron and scattering amplitudes is at present a conjecture that has passed many non-trivial checks, including an understanding of how locality and unitarity arise as consequences of positivity. Research has been led by Nima Arkani-Hamed. Edward Witten described the work as “very unexpected" and said that "it is difficult to guess what will happen or what the lessons will turn out to be. Description[edit] Using twistor theory, BCFW recursion relations involved in the scattering process may be represented as a small number of twistor diagrams. Implications[edit] See also[edit] References[edit] Notes[edit] Bibliography[edit] External links[edit]

Fluid Experiments Support Deterministic “Pilot-Wave” Quantum Theory For nearly a century, “reality” has been a murky concept. The laws of quantum physics seem to suggest that particles spend much of their time in a ghostly state, lacking even basic properties such as a definite location and instead existing everywhere and nowhere at once. Only when a particle is measured does it suddenly materialize, appearing to pick its position as if by a roll of the dice. This idea that nature is inherently probabilistic — that particles have no hard properties, only likelihoods, until they are observed — is directly implied by the standard equations of quantum mechanics. But now a set of surprising experiments with fluids has revived old skepticism about that worldview. The experiments involve an oil droplet that bounces along the surface of a liquid. Particles at the quantum scale seem to do things that human-scale objects do not do. Magical Measurements Bottom: Akira Tonomura/Creative Commons Some physicists now disagree. Riding Waves The neglect continues.

Personal and Historical Perspectives of Hans Bethe Atoms Reach Record Temperature, Colder than Absolute Zero Absolute zero is often thought to be the coldest temperature possible. But now researchers show they can achieve even lower temperatures for a strange realm of "negative temperatures." Oddly, another way to look at these negative temperatures is to consider them hotter than infinity, researchers added. This unusual advance could lead to new engines that could technically be more than 100 percent efficient, and shed light on mysteries such as dark energy, the mysterious substance that is apparently pulling our universe apart. An object's temperature is a measure of how much its atoms move — the colder an object is, the slower the atoms are. Bizarro negative temperatures To comprehend the negative temperatures scientists have now devised, one might think of temperature as existing on a scale that is actually a loop, not linear. With positive temperatures, atoms more likely occupy low-energy states than high-energy states, a pattern known as Boltzmann distribution in physics.