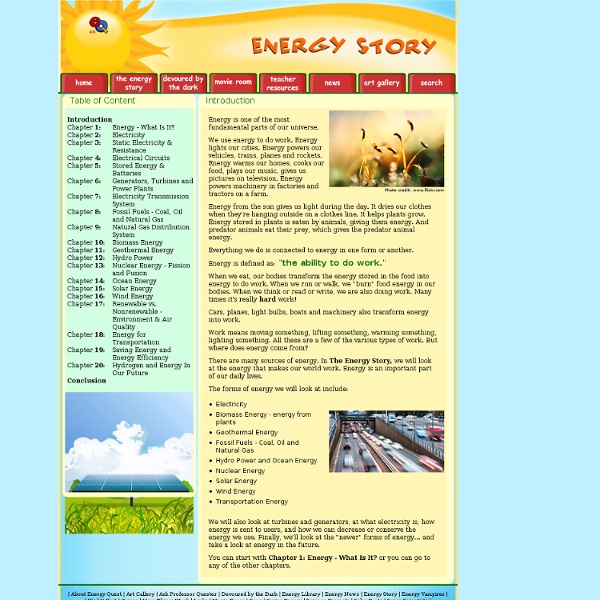 Energy is one of the most fundamental parts of our universe. We use energy to do work. Energy lights our cities. Energy powers our vehicles, trains, planes and rockets. Energy warms our homes, cooks our food, plays our music, gives us pictures on television. Energy powers machinery in factories and tractors on a farm. Energy from the sun gives us light during the day. Everything we do is connected to energy in one form or another. Energy is defined as: "the ability to do work." When we eat, our bodies transform the energy stored in the food into energy to do work. Cars, planes, light bulbs, boats and machinery also transform energy into work. Work means moving something, lifting something, warming something, lighting something. There are many sources of energy. The forms of energy we will look at include: Electricity We will also look at turbines and generators, at what electricity is, how energy is sent to users, and how we can decrease or conserve the energy we use.

How-do-spiders-catch-their-prey? - spiders, efficient, hunters, kingdom, cheetah, exterior, portrayed, macabre, monsters, squashed, beautiful, creatures, deserve, treatment, getting How do spiders catch their prey? step 0 Spiders are some of the most efficient hunters of the animal kingdom, no less feared than the shark, the cheetah or the wolf. With their eight legs, hairy exterior and, yes, eight eyes, it’s little wonder that they are often portrayed as macabre monsters in books and movies, and are squashed at first sight. In effect, though, they are beautiful creatures, and deserve a fairer treatment from all of us. So how do spiders spin their webs, and how do they catch their prey?

Top 20 Greatest Inventions of All Time Technology is a core component of the human experience. We have been creating tools to help us tame the physical world since the early days of our species. Any attempt to count down the most important technological inventions is certainly debatable, but here are some major advancements that should probably be on any such list (in chronological order): 1. FIRE - it can be argued that fire was discovered rather than invented. Certainly, early humans observed incidents of fire, but it wasn’t until they figured out how to control it and produce it themselves that humans could really make use of everything this new tool had to offer.

Yale Launches an Archive of 170,000 Photographs Documenting the Great Depression During the Great Depression, The Farm Security Administration—Office of War Information (FSA-OWI) hired photographers to travel across America to document the poverty that gripped the nation, hoping to build support for New Deal programs being championed by F.D.R.’s administration. Legendary photographers like Dorothea Lange, Walker Evans, and Arthur Rothstein took part in what amounted to the largest photography project ever sponsored by the federal government. All told, 170,000 photographs were taken, then catalogued back in Washington DC. The Library of Congress became their eventual resting place. We first mentioned this historic project back in 2012, when the New York Public Library put a relatively small sampling of these images online.

Analyzing Stories When you analyze a story, you try to find a meaning for the story. You make a claim about the story's meaning, and provide evidence from the story itself to support your analysis. You look for a reasonable way of understanding the story. Here are some questions to ask yourself about a story when you are trying to understand it. 1. On a literal level, what happens in the story? How Does the Internet Work? - A Simple Explanation of the Internet You’re on vacation in Italy, sitting at a nice café (with free Wi-Fi). It’s a few days into your trip now and you’ve taken some beautiful photos that you want to share with your parents back home. Mom and Dad aren’t too familiar with Dropbox or Google Drive, so instead, you attach the photos to an email. Your mouse hovers over the send button and click…almost instantaneously it shows up in your Mom and Dad’s inboxes halfway across the world.

70 Skype Lessons For Active Learning, Sorted By Topic Continuing our mini-series on using Skype in the classroom , I wanted to present a few of the many Skype lessons that are currently available for classrooms and everyone else to try out. What is a Skype lesson, you ask? It’s simply a pre-planned ‘call’ where you can watch and learn from others via Skype. Like a Google+ Hangout or other live video-based lesson.

How Does WiFi Work? - 8 Things You Didn’t Know About Wifi Ah, good ‘ole WiFi. From helping us to keep our phone bill low (except March, goddammit) to allowing our laptops/tablets/etc. to connect to the internet, WiFi has been a ubiquitous companion that we’ve all come to know and love. WiFi is also useful for some IoT applications (wait, what is IoT?), such as building and home automation or in-house energy management.

The start of the First World War was a seminal moment in modern history The final weekend of peace was sunny and warm. On the Bank Holiday Monday, day trippers flocked to the most popular resorts, Blackpool and Brighton, largely oblivious of the calamity that was beginning to unfold. At 11pm the following day – Tuesday, August 4 – Britain opened hostilities with Germany following the latter’s invasion of Belgium. Across Europe, a general mobilisation called some 17 million men to arms. The Great War was under way. The benefits of a bilingual brain - Mia Nacamulli Amazed by what you have learned about having a bilingual brain? Then, start learning another language now! This website has tons of free lessons, games and quizzes to get you started! Pick one language or even two languages and get that gray matter growing. Speaking more than one language is like exercise for the brain? Read Radiolab blogger Chris Berube discusses the advantages of speaking multiple languages in his post “Mapping the Bilingual Brain” Want to know some more of the advantages of having a bilingual brain?

The Ongoing Battle Between Science Teachers And Fake News : NPR Ed Every year Patrick Engleman plays a little trick on his students. The high school chemistry teacher introduces his ninth-graders in suburban Philadelphia to an insidious substance called dihydrogen monoxide. It's "involved in 80 percent of fatal car crashes. It's in every single cancer cell. This stuff, it'll burn you," he tells them.

Auschwitz 70th anniversary: Survivors warn of new crimes 27 January 2015Last updated at 13:11 ET Survivors joined together to commemorate the liberation of the camp Auschwitz survivors have urged the world not to allow a repeat of the crimes of the Holocaust as they mark 70 years since the camp's liberation. Plant Lessons, Printables, & Resources Highlights Martin Luther King DayMartin Luther King Day is January 18. Celebrate this American hero and civil rights leader with our writing activities, lessons, and literature guides. Coding & Computer Science Introduce your students to basic coding and computer science! First He Invented The Phone. Then, Bell Left A Voice Message As the inventor of the telephone, Alexander Graham Bell is credited with bringing countless voices to our ears. And now, for the first time, here he is imploring us to hear his own voice: "Hear my voice. Alexander Graham Bell." A phonorecord by Alexander Graham Bell, one of the Smithsonian's trove of recordings left there by the inventor of the telephone. Richard Strauss/Smithsonian's National Museum of American History Via AP hide caption