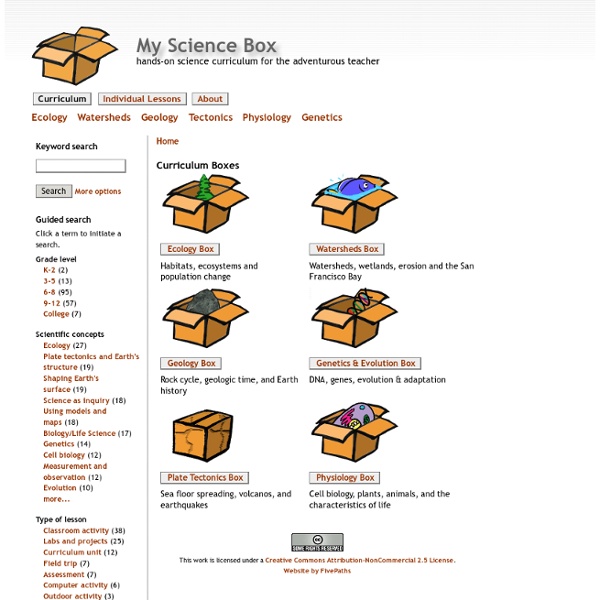 Teaching materials Teaching materials Evolution is essential to our curriculum and to scientific literacy. Imagine teaching social science without teaching history; students would lack perspective on events going on today. The Understanding Evolution project aims to help instructors develop student understanding of: Basic evolutionary patterns and processes Evolutionary theory's ability to explain phenomena across the many subdisciplines of biology The many applications of evolutionary theory, both in solving real world problems and in scientific research The evidence supporting evolutionary theory As is true of any subject, to teach evolution successfully, teachers need to be prepared with a conceptual understanding of the topic and with effective curricular strategies. We've assembled a variety of resources to help you increase student understanding of evolution.

Ten Recent Advances in Evolution By Carl Zimmer Posted 10.26.09 NOVA To celebrate the 150th anniversary of the Origin of Species, here's a list—by no means exhaustive—of some of the biggest advances in evolutionary biology over the past decade. These advances include not just a better understanding of how this or that group of species first evolved, but insights into the evolutionary process itself. Ten significant leaps forward in evolution research in the past decade, as chosen and described by noted science writer Carl Zimmer Enlarge Photo credit: (Earth) © NASA; (text) © WGBH Educational Foundation Darwin envisioned natural selection acting so slowly that its effects would be imperceptible in a human lifetime. If he were alive today, Darwin would be astonished at the pace and nature of discoveries being made in evolutionary biology, including the witnessing of evolution in action. Thanks to powerful, cheap DNA sequencing technology, scientists can now pinpoint the molecular changes underlying this rapid evolution.

Science Writer - Help with Lab Reports Welcome to CAST Science Writer, the tool that supports students in writing lab and class reports. This tool is geared toward middle school and high school students. Check out the supports and help available in Science Writer described below. Or click the "Take a Tour" button above to see how Science Writer works. A Report Structure All parts of a science or lab report are broken into small steps so the author can concentrate on one part of the report at a time. A Process for Writing Science Writer helps you through the process of draft, revise, and edit when writing a science report. Sentence Starters The "Help Me Get Started" button has two functions (1) it divides the writing into smaller sections and (2) provides sentence starters when on the draft screens in the writing process. Checklists Checklists are available when you revise and edit your science report. Journal This is a place in Science Writer where you may write notes, reflect, make comments or questions, or keep track of data.

Making cross curricular links Primary schools should strive to make goodquality crosscurricular links whilst maintaining the distinctive nature of subjects such as D&T... One of the main purposes of Sir Jim Rose’s proposals for a new primary curriculum in England was to encourage schools to make more cross-curricular links. Of course, these proposals will now not become statutory, with the current subject-based National Curriculum remaining in force until the end of July 2012. Thereafter, we expect a new, slimmed-down National Curriculum, most-likely based on a similar framework of subjects. Firstly, it’s important to be clear about the difference between the ‘what’ and the ‘how’ of the primary curriculum. The best primary practice includes a blend of rigorous, discrete subject teaching and equally effective cross-curricular links – both approaches are needed for effective learning. Making connections It’s helpful to think about cross-curricular links in two ways. Meaningful contexts Motivating children to learn

The Human Brain Project Blue Brain’s success in modeling the rat cortical column has driven the development of the Brain Simulation Facility and has demonstrated the feasibility of the project’s general strategy. But, this is only a first step. The human brain is an immensely powerful, energy efficient, self-learning, self-repairing computer. If we could understand and mimic the way it works, we could revolutionize information technology, medicine and society. To do so we have to bring together everything we know and everything we can learn about the inner workings of the brain's molecules, cells and circuits. Experimental and clinical data is accumulating exponentially. The Human Brain Project website HBP-videoverview from Human Brain Project on Vimeo.

educreations teacherswithapps Educreations Interactive Whiteboard, by Educreations, Inc, is an incredible, yes that’s right, INCREDIBLE app. This newly released app comes with the huge bonus of being FREE! We think this app has the edge needed to push education in the right direction and to begin modernizing teaching as we know it. Educreations Inc had the wherewithal to realize the need to add the option to use multiple pages for the same lesson; this is another feature that makes this app a standout. This revised Bloom’s Taxonomy pyramid shows classification of levels of intellectual behavior that is important in the learning process. It is obvious that the developers in this new start-up company spent much time and consideration while incorporating user-friendly features into this app.

The Biology Place NOTE: The Shockwave files (.dcr extension) located on this site will not run on iPads or in 64-bit Chrome v. 39 or higher. Please use Internet Explorer or FireFox. BioCoach BioCoach activities allow students to visualize and apply their understanding of biological concepts. LabBench LabBench provides students with pre- and post-lab reviews. Glossary The Glossary is a comprehensive, online, easily accessible listing of definitions of the key biological concepts and terms introductory students are likely to encounter. AP® is a trademark registered and/or owned by the College Board, which was not involved in the production of, and does not endorse, this site.