Behavior of Waves. A Moment of Science. How Do Polarized Sunglasses Work? Refraction of light — Science Learning Hub. Refraction1 is the bending of light (it also happens with sound, water and other waves) as it passes from one transparent2 substance into another. 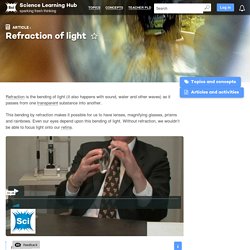 This bending by refraction makes it possible for us to have lenses, magnifying glasses, prisms and rainbows. Even our eyes depend upon this bending of light. Without refraction, we wouldn’t be able to focus light onto our retina3. Refraction By using the example of spearing a fish, Associate Professor Gordon Sanderson, an ophthalmologist from Otago University, explains the principle of refraction. Change of speed causes change of direction Light refracts whenever it travels at an angle into a substance with a different refractive index (optical density4). This change of direction is caused by a change in speed. How much does light bend? Refraction of light in water When light travels from air into water, it slows down, causing it to change direction slightly.

The amount of bending depends on two things: Refractive index of some transparent substances. How 3D Glasses Work. ELECTROMAGNETIC SPECTRUM Jeopardy Template. Color Vision - Light, Radiation, Spectrum. What It's Like To Be Color Blind. RGB and CMYK color models. The most common devices we use use in a modern household, such as a television, computer monitor, or any sort of device the emits light is typically engineered using the primary colors of light - red, green and blue. 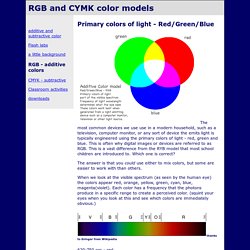 This is often why digital images or devices are referred to as RGB. This is a vast difference from the RYB model that most school children are introduced to. Which one is correct? The answer is that you could use either to mix colors, but some are easier to work with than others. When we look at the visible spectrum (as seen by the human eye) the colors appear red, orange, yellow, green, cyan, blue, magenta(violet). Thanks to Gringer from Wikipedia. Light and Color. What Color Is A Mirror? Light waves, visible and invisible - Lucianne Walkowicz. Can we accurately describe light as exclusively a wave or just a particle? 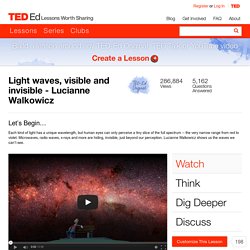 Are the two mutually exclusive? In this third part of his series on light and color, Colm Kelleher discusses wave-particle duality and its relationship to how we see light and, therefore, color. A look at sustainable energy and what we use our energy for. How many lightbulbs? There are three types of color receptors in your eye: red, green and blue. Have you ever wondered what color is? Light waves, visible and invisible - Lucianne Walkowicz. 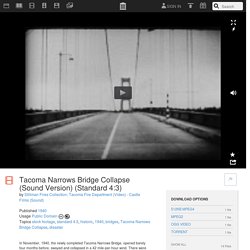 There were no casualties except a dog trapped in a car stranded on the bridge. A rescue was attempted (by the man with the pipe), but the frightened animal would not leave the car. The site was declared a National Historic Landmark to discourage relic seekers and salvage operations. Tacoma Narrows Bridge: Lessons From the Failure of a Great Machine. How Galloping Gertie collapsed left us a lasting design legacy. 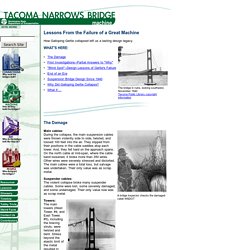 The Damage Main cables: During the collapse, the main suspension cables were thrown violently side to side, twisted, and tossed 100 feet into the air. They slipped from their positions in the cable saddles atop each tower. And, they fell hard on the approach spans. On the north cable at mid-span, where the cable band loosened, it broke more than 350 wires. What Colour Is This Dress? (SOLVED with SCIENCE) Colors Animals See. How do you know if an animal can see color? 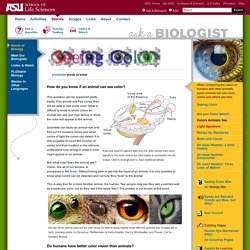 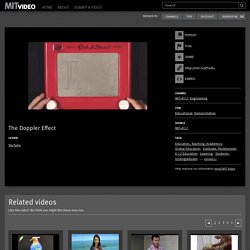 This includes feature and editorial videos, event recordings, academic content and more. Each day, the editorial team at MIT Video selects one or more videos to "spotlight" based on the videos' content, production value and timeliness. We hope you enjoy MIT Video and welcome your feedback. Advanced searching Not exactly sure what you're looking for? Give it a try Submitting videos Have you created a video for your department, lab or center? Tell us about it. The Anatomy of a Wave. A transverse wave is a wave in which the particles of the medium are displaced in a direction perpendicular to the direction of energy transport. 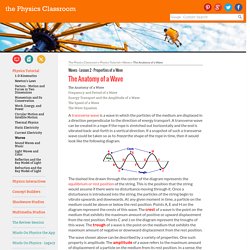 A transverse wave can be created in a rope if the rope is stretched out horizontally and the end is vibrated back-and-forth in a vertical direction. If a snapshot of such a transverse wave could be taken so as to freeze the shape of the rope in time, then it would look like the following diagram. CYMATICS: Science Vs. Music. Physical Science Resources, Units and Lessons.